Between the Lines: Many Brave Fools 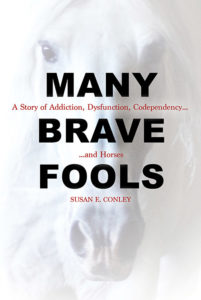 Codependency, a compulsive behavior sometimes known as “relationship addiction,” is often characterized by a dysfunctional, one-sided relationship that is emotionally destructive – even abusive. For years Susan Conley found herself trapped, married to an addict whose health, welfare, and safety she valued far above her own. Over time she watched as she lost contact with her own needs, desires, and sense of self. But then at forty-two, after yet another crisis came to an anticlimactic resolution that left nothing healed and little to hope for, she decided, having never so much as touched a horse, to take up riding. Here, with humor and honesty, Conley chronicles her experiences, sharing how her pledge to rediscover herself following her divorce was aided, abetted, and challenged by the horses in her life.

Many Brave Fools explores how the process of making herself into a rider also helped Conley become the person she most wanted to be: not the “ex-wife of an addict,” but a responsive, confident, even courageous woman, entering the prime of her life.

Susan E. Conley has a Master of Philosophy in Irish Theatre Studies from the Samuel Beckett Centre, Trinity College, an Honors Degree in Psychology, and a diploma in Equine Assisted Therapy and Learning. Conley is the author of three books: Drama Queen, The Fidelity Project, and That Magic Mischief. She lives in Dublin, Ireland. 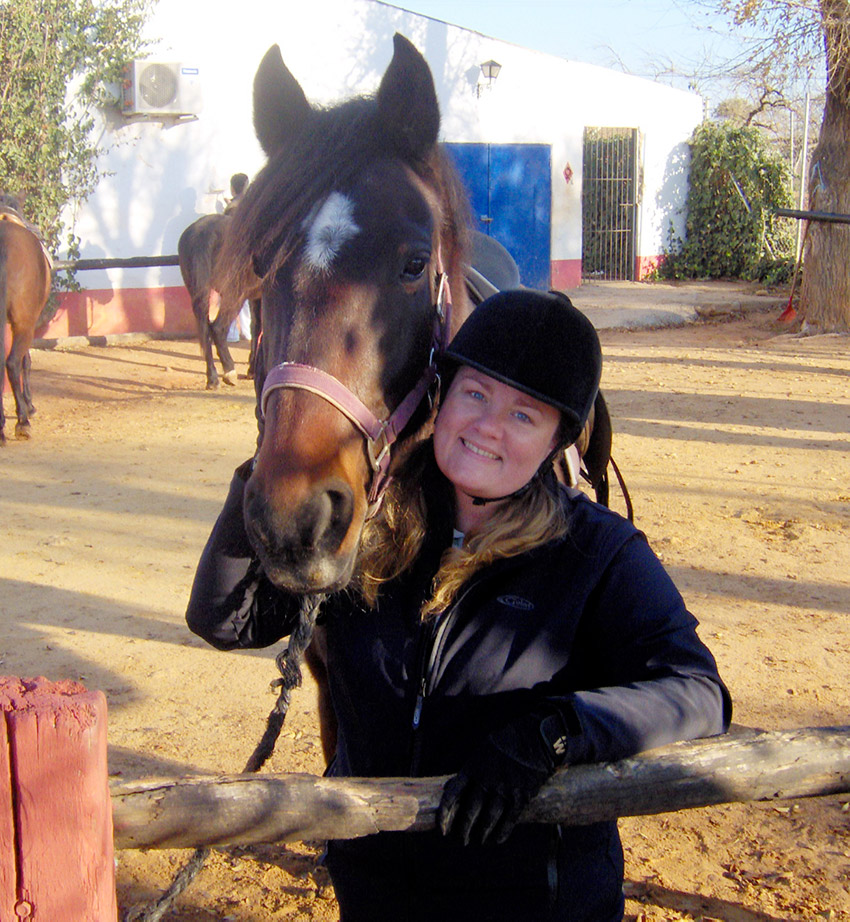 EXCERPT FROM MANY BRAVE FOOLS

The wee girls circled round and round, their legs pounding the sides of their ponies, and I was feeling breathless.

As excited as I was to take my first proper riding lesson, I realized I would actually have to be on a horse to take it, and God, they were big, weren’t they? I watched those kids flying around the ring and felt increasingly fluttery and anxious. As little as I knew about horses, I knew this anxiety was a bad thing. I was already feeling under the weather: I had a headache as well as a scratchy throat, which was exacerbated by the unexpected heat of the autumnal day that had turned the Number 63 bus into a trundling sun trap…I could always come back another time.

No, I couldn’t come back another time. I’d spent the entire week, in the run-up to this day, talking about it to the girls at work. The day I’d finally Googled “equestrian centers in Dublin,” I saw: horse statues on a house on the coast road that I’d never seen before; a horse trailer; an actual horse; and on the way home from work, my iPod opened the evening’s commute with “Land” from Patti Smith’s Horses.

So, I’d made it to the horse place. I walked up a long, long road to a steep, steep hill. I didn’t know where anything was, I didn’t know who to make myself known to—I needed a helmet, I knew that much. I wandered around the arenas and paddocks; I was an hour early, thanks to the bus. I was intimidated by the thoughtless ease with which a clutch of girls in hard hats inhabited the entrance to what was surely the main barn. I couldn’t go near them; I felt like I didn’t have the right.

I drifted over to the door of the inside ring. There were eight girls riding ponies and one woman standing in the middle, yelling. Dirt flew from beneath hooves as the last girl stopped going fast (Were they “cantering”? I wondered) and the woman in the middle told them all to line up at “K,” one of the random letters nailed to the walls. Parents hung out in front of the halfdoors, chatting amongst themselves and happily complimenting their daughters as they sped past. These kids were now leaping over obstacles. Jesus God. I drifted away.

Then an older bunch of riders came back from somewhere, rode into the ring, and everyone slipped effortlessly out of their saddles to the ground. The horses were led out and taken to the barn, voices were raised simply to be audible, and I backed away from the group—I really needed that helmet. I found a door labeled “Office” and entered. There was a guy sitting behind a desk who seemed to be in charge, so I told him my name, and he said, “You’re late.”

A helmet, stinking with hours and hours of strangers’ sweat, was jammed on my head, and I was instructed to go back to the indoor arena, and I did, and there the teacher asked me who I was and had I done much riding, and I told her my name, and said none, and she told me to get up on a black horse, and I did, and she showed me how to hold the reins, and I held them, and she told us all to walk on, and…

And the horse took one step, and I thought to myself, Fuck, and he took another and I thought, Fucking hell get me the fuck offa this fucking—and another step and another, and then I was no longer a human woman but a sack of frozen potatoes sporting a fetid black hat.

I didn’t even know the black horse’s name. How were we supposed to bond?

I could hear myself breathing, air whistling in and out of my nose. I heard a voice shouting, but it wasn’t language: it sounded like short, sharp raps. There was a sensation that it was the same series of sounds over and over: rap rap rap. The other people on horses in the arena understood and were obviously responding to these sounds, because one minute, we were going in one direction, and then we weren’t: we were threading our way from one corner of the arena to the other and going the opposite way…and I’d yet to fall off.

And with maybe fifteen minutes to go (I didn’t dare glance at my watch, because if I moved my hands, or wavered in my unstinting regard of the back of the horse’s head, something bad would happen) it occurred to me to maybe relax my stiffened legs a little, like, maybe even grip the sides of the horse, with my calves? Was this a good idea? I did it, and I immediately stopped hyperventilating. The teacher wasn’t bothered that I wouldn’t do anything but walk (“Sue, want to give the trot a go?” “No.”), and I sensed that my lessonmates were still where they were meant to be, on the backs of their horses, not writhing around on the ground clutching shattered limbs…and I relaxed.

That relaxation, and the action of my calves tightening, as well as this intuitive (commonsensical!) decision, resulted in a somewhat straighter spine. I sat better, and that enabled me to hazard a look around, and to drop my elbows a little, although my arms were so tense you could have shattered concrete blocks on them, and my hands were so thoroughly clenched on the reins I was sure I’d broken all my finger bones.

Suddenly, the staccato rap-rap sounds became language: “Turn in and give them all a big pat…. Feet out of the stirrups…swing your leg around…drop down,” and I was back on the ground. I leaned against my soon-to-be-erstwhile trusty steed and noticed a nametag on the horse’s bridle.

“Mercury,” I whispered in his ear, “Mercury! You are great!”

Mercury snorted and dropped his head, stretched out his neck, and then brought his face back up, one eye looking directly into mine.

I walked down the steep hill to the long road to the bus stop, my hair having fully absorbed, via the helmet, the honest sweat of women like me—women who have ridden a horse. I no longer had even the smallest trace of flu, or headache, or sore throat, or a single critical thought about what I’d just done. Swaggering like a cowboy (there’s a reason they walk like that), all I thought was, I did it, I did it, I did it!
I’m fairly sure I’ve never been so delighted in my entire life.

Many Brave Fools can be purchased from Trafalgar Square Books.