The second annual Longines Masters of New York (LMNY) continued a tradition of excitement, excellence, luxury, and elegance from April 25th through April 28th, 2019. Held at the NYCB LIVE, Home of the Nassau Veterans Memorial Coliseum, competitors, their teams, and spectators enjoyed the shopping and entertainment at the LMNY, escaped to New York City for a Broadway show, or even drove to Southampton for a quiet dinner by the beach, all because of the show’s convenient location. And although there are endless activities in the surrounding New York area, EEM’s Christophe Ameeuw and his team produced an event with such exceptional attractions that it was unnecessary to leave the NCYB LIVE for the whole week.

From the moment competitors and spectators pass the tall #WeRideTheWorld wall in front of the entrance, they are welcomed to an event unlike any other competition in the United States. From the world’s top horses and competitors, to the American Kennel Club Agility Premier Cup, to new and innovative equestrian products, to the most exquisite cars and watches, to magnificent artwork, whatever your interests are, you can find them at the LMNY. 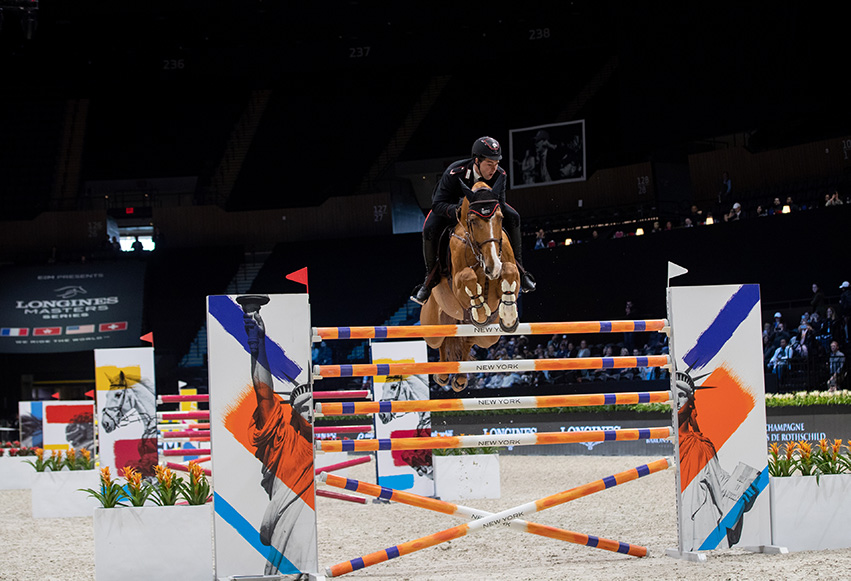 One of the signature attractions at the LMNY is the Lamborghini Masters Power class. Spectators “oohed” and “aahed” as the horse and rider teams tested their limits and the fences got higher and higher. A field of seven horse and rider teams started the competition, with the final fence set at 1.45m in the first round. All seven competitors finished the first round with ease. Switzerland’s Pius Schwizer and his horse, Ulane Belmaniere, were the last to go. When he was asked by the commentator how high the Selle Français mare could jump, he pointed to the rafters, and the crowd went wild.

Frank Rothenberger and his course designing team apparently realized the level of athleticism in the order because, after careful consideration, the final fence of the second round soared to 1.70m. From there, each round the fences continued to grow: 1.80m, 1.90m, and, finally, 2.02m. Kristen Vanderveen with Bull Run’s Almighty and Italy’s Emanuele Gaudiano with Chalou were the only two pairs to make it to the final round, but Vanderveen ultimately chose to save her horse for another day.

In order to activate the €10,000 bonus, the final fence needed to be greater than 2.0 meters, so the course designing team made the thoughtful decision to raise it to 2.02m – over six and a half feet! Gaudiano and Chalou cleared the fence with ease and Gaudiano gave a shout out to the crowd, thanking them for giving for his horse the encouragement it needed. 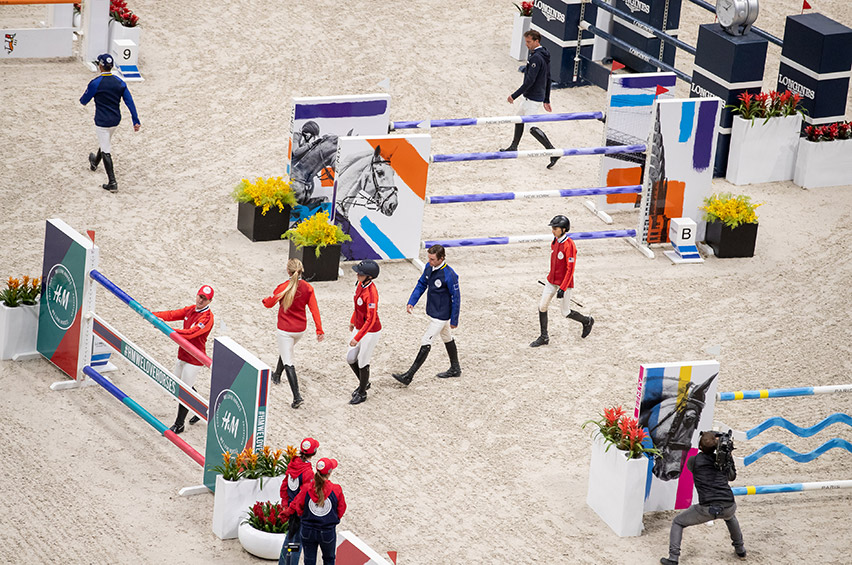 Another crowd favorite event was the Riders Masters Cup, where Riders Europe went head-to-head with Riders USA. The team element really made the crowd go wild; they were cheering loudly, wearing team hats (red for USA and blue for Europe), and waving flags. Going into the Saturday evening event, Riders Europe had dominated the previous three Riders Masters Cups and Riders USA wanted to take the win in New York.

In each round, riders from Riders USA were matched against riders from Riders Europe with points awarded in each duel based on speed and faults. The unusual format adds a twist of excitement for both the crowd and the competitors. Local favorites like Lillie Keenan and McLain Ward elicited a tremendous uproar from the stands, but by the second and final round, the crowd was cheering for every horse and rider team that entered the ring.

In the end, Riders Europe took the win for a fourth consecutive time. While Riders USA captain, Robert Ridland acknowledged it was not fun losing, he explained that he believes the format is “tremendous” and “unique.” Want to know more about how the format works? Will Riders USA take over the victorious title? You’ll just have to see it for yourself at the next Riders Masters Cup. Sunday’s Grand Prix was held in an unusual format for US showjumping competitions. Twenty-nine horse and rider pairs made an attempt at German course designer Frank Rothenberger’s first round course, with the top 12 returning for a slightly shorter second round. Six horse and rider pairs with clear rounds and six with four-faults returned in reverse order. As each horse and rider combination completed the second round, the top three riders took a seat at the front of the arena and played what can only be described as musical chairs.

Commentator Catie Staszak interviewed the riders as they took their respective seats. The inquiry allowed the spectators to hear what was going through their minds after completing two challenging rounds, and more about the partnerships between horse and rider. The audience learned it was American rider Devin Ryan’s first time indoors with Caspar’s Lasino, and Switzerland’s Beat Mändli expressed how lucky he is to have his mare, Dsarie. The musical chairs continued up to the point when Nassar and Lucifer were the final pair to enter the ring.

The Netherland’s Harrie Smolders, Belgium’s Olivier Philippaerts, and Israel’s Daniel Bluman sat in the 1st, 2nd, and 3rd chairs respectively, while the crowd watched in absolute silence as Nassar navigated the track. After Lucifer cleared the final fence and Nassar looked at the clock, his enormous smile indicated he knew he had captured the lead and as EEM’s Christophe Ameeuw later aptly announced, “here in New York, a star is born.”

Read H&S’s in-depth post-show interview with Nayel Nassar for free in the online version of our Summer ’19 Issue. 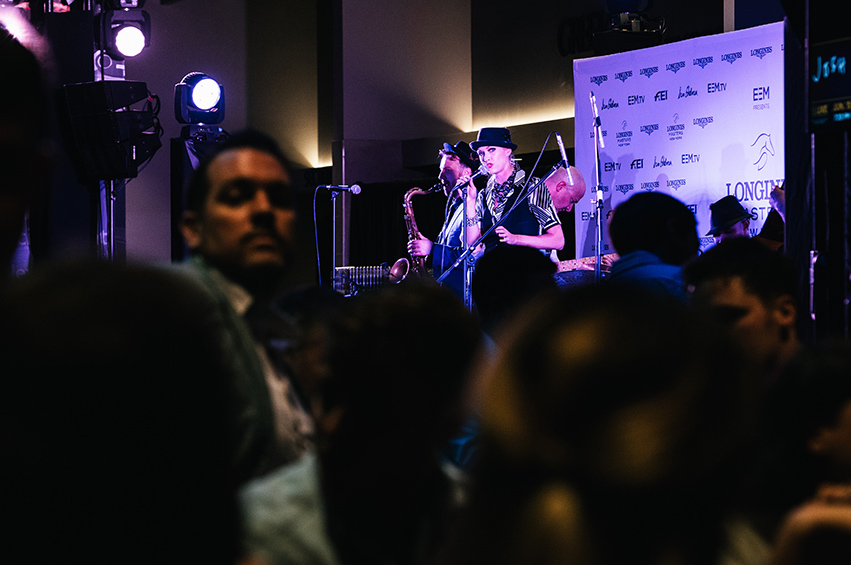 One of the most appealing traits of the Longines Masters series is the opportunity for spectators to feel like they are in the arena with some of the most talented horses and riders in the world. In New York, this is particularly true. Whether sitting in the luxurious VIP area or in general seating, spectators could clearly see the smile stretch across Nayel Nassar’s face after his amazing wins and could hear Kristen Vanderveen let out a quiet giggle and a “what?” after clearing the 1.90m vertical in the Lamborghini Masters Power. There is truly something special about being that close to the action and it is something hard to come by at most competitions.

Of course, seeing the top horses and riders in show jumping is priority for most, but there are other countless attractions that make the LMNY experience unforgettable. Prestige Village offers visitors the chance to peruse artwork and a variety of luxury items, which are not solely for the equestrian enthusiast. For the younger attendees, kids are welcomed to a kids’ corner, complete with face painting, clowns, and puppies. In the mood to stay seated? Not a problem, as there is constant action in the main arena with Santí Serra Camps’ remarkable horsemanship performance, the American Kennel Club Agility Premier Cup, interviews with the riders, and the mind-blowing acrobats on jumping stilts. 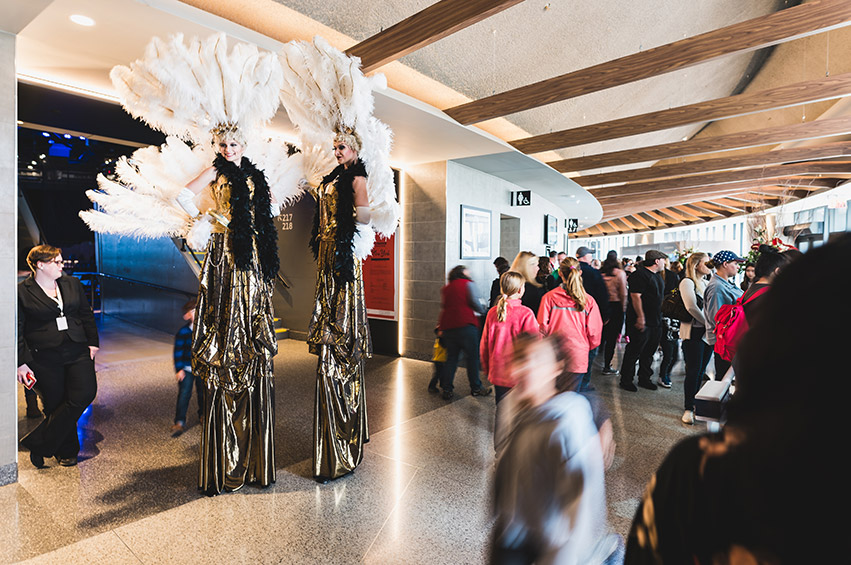 The close proximity to the action, the quality location, and all of the attractions in the Prestige Village makes the LMNY attractive to those outside of the immediate equestrian community, as well. During every event, spectators could be seen surrounding the sizable arena. They consisted of the competitors and their teams, local residents, representatives from the numerous sponsors of the event, and friends of the equestrian community.

The Longines Masters series truly allows those who are unfamiliar with the sport an opportunity to gain knowledge and interest. A local resident reported that she had no prior knowledge about show jumping, but after such an incredible show, she would definitely be following the results of the competitors from now on. Another attendee was asked if he was thinking about taking up riding and he said, “No, but I will definitely be taking some of the style.”

The LMNY wrapped up on Sunday April 28th, 2019, but it will be back at the NYCB LIVE, Home of the Veterans Memorial Coliseum, from April 23rd to 26th, 2020. As the event continues to get better each year, we can only expect the third edition to blow us away. Until then, the world’s top horses and riders will take on the Longines Masters of Lausanne, Longines Masters of Paris, and the Longines Masters of Hong Kong, where the excellence and luxury will surely continue. Make sure you don’t miss the events, which are also broadcast live on EEM.tv.