Hunter Drohojowska-Philp: A Life of Art, Artists, and Horses

Horse & Style sits down with art critic, author and radio host Hunter Drohojowska-Philip to talk about art and horses. Already acclaimed for her definitive biography of Georgia O’Keeffe, her recent book Rebels In Paradise: The Los Angeles Art Scene and the 1960s, published by Henry Holt and Company was on the LA Times bestseller list in the non-fiction category. She is also the California Collections Specialist for the Archives of American Art, Smithsonian Institution.

Drohojowska-Philp is a regular contributor to ArtNews Magazine and the Los Angeles Times. Over the years, she’s written for Art in America, Artforum, Art and Auction, Architectural Digest, and has been involved in a variety of radio and television programs. She was the LA Weekly’s first art critic.

From 1987 to 1996, Drohojowska-Philp was chair of the Department of Liberal Arts and Sciences at Otis College of Art and Design. She lectures on modern and contemporary art and in March, 2003 was honored by the International Association of Art Critics in being asked to deliver what was then called the “Clement Greenberg lecture.” She is listed in Who’s Who in American Art and is a member of the International Association of Art Critics and The Authors Guild. 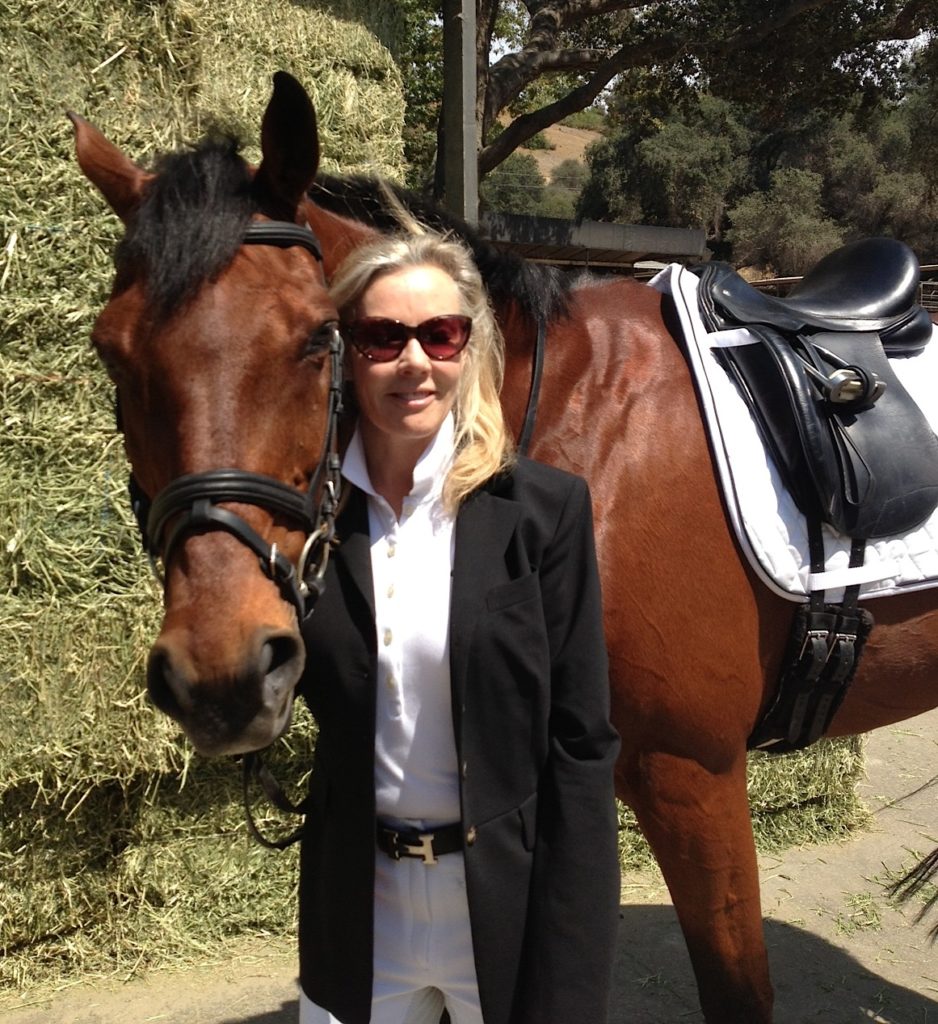 Hunter and her horse, Handsome.

Horse & Style: How did you get interested in riding?
HP: My mother took me to an English riding stable in Oak Park, outside Chicago, when I was about 7. After that, I never stopped wanting to own a horse.

H&S: Tell me about your horse.
HP: Handsome, his real name, is a Swedish warmblood, a blood bay with black stockings, mane and tale. He has no white markings at all and lives up to his name, which really is Handsome Swede. He has his own Swedish passport!

H&S: How do you integrate a writing career and your riding?
HP: With great difficulty. I ride on weekend mornings since I wouldn’t be writing then, anyway. Then I fit in one or two other mornings as best I can. I ride at Millcreek Equestrian Center in Topanga, which is 45 minutes to an hour from my home so it is a real commitment.

H&S: I love the idea of horses as art i.e. the aesthetics of the sport. What is your favorite horse painting?
HP: I love the flamboyance of Delacroix’s horses. Then there is The Piebald Horse by Paulus Potter at the Getty Museum. A wonderful 17th century Dutch picture.

H&S: Who is your favorite artist and why?
HP: I could never narrow my preferences to such an extent, let alone explain the reasons. I can be thrilled by Peter Paul Rubens, Barnett Newman and Mike Kelley in the course of a day of visiting museums.

H&S: If you could visualize  yourself out on a ride with a famous artist, who would it be and what would you talk about?
HP: I wouldn’t mind a day in the country with Edgar Degas. I don’t think Picasso was much of an equestrian.

H&S: If you could ride in the most beautiful place in the world, where would it be?
HP: The English countryside.

H&S: You’ve written extensively about Georgia O’Keeffe, what kind of riding outfit would Georgia design for dressage or show jumping?
HP: Black and white of course.

H&S: Who is your favorite equestrian author and book?
HP: The Black Stallion books, I read all of them when young. I can’t imagine how I survived the sad parts.

H&S: Do you have any funny horsey stories.
HP: Lots, but I will admit that the week after I wrote the check for Handsome, he came down with hives. I had never heard that horses could get hives and Corey Walkey, who owns Millcreek, said dryly, “That’s one of those details we forgot to mention before you bought the horse.” Of course, there were lots of other details as well.

H&S: Do you have a favorite item of equestrian or equine attire? The eponymous Hermes jacket?
HP: I loved buying Hermes accessories–scarves, bags, jewelry– because of their equestrian associations but now that I am a horse owner, I’ve had to reduce a lot of my shopping. My mother, who was so excited that I was riding again, bought me the black Hermes riding jacket so I have two reasons to love it.

H&S: Why do you think Fellini put a white horse in every one of his movies?
HP: I can only think that if I were a film director, I too would like to add a white horse to each film but it is probably a much more about the surreal and symbolic content.