Lauren Tisbo Has High Hopes As She Aims for CN International

This Sunday, September 8,  young American show jumping rider Lauren Tisbo will ride in her first CN International $1,000,000 Grand Prix at Spruce Meadows. She is currently ranked 13th on the Rolex/USEF standings. She will be riding her lovely Irish Sport Horse gelding, Roundthorn Madios.

The 29-year-old rider feels Roundthorn Madios is up to the challenge of the three-round elimination format; as he has already proven his mettle by winning the $33,000 Prairie Mines and Royal TY Ltd. Cup, a marathon – 1.50 meter class, on June 6 at Spruce Meadows. That win, the most difficult and rewarding that she has experienced in her young career, marked her first international victory.

She purchased Roundthorn Madios (Condios x Clover Hill) from Irish rider Andrew Bourns in November 2012. He has a wonderful temperament, a heart of gold, a great canter, eagerness to learn and fabulous scope.

“His only fault is that he loves to beg for horse cookies, especially Polo Mints,” Lauren joked. She will not be training any differently for the big class; many of her friends have told her through the years that if you change something in your routine; it usually blows up in your face on competition day. She likes to keep things consistent because she knows her horses’ strengths and weaknesses. 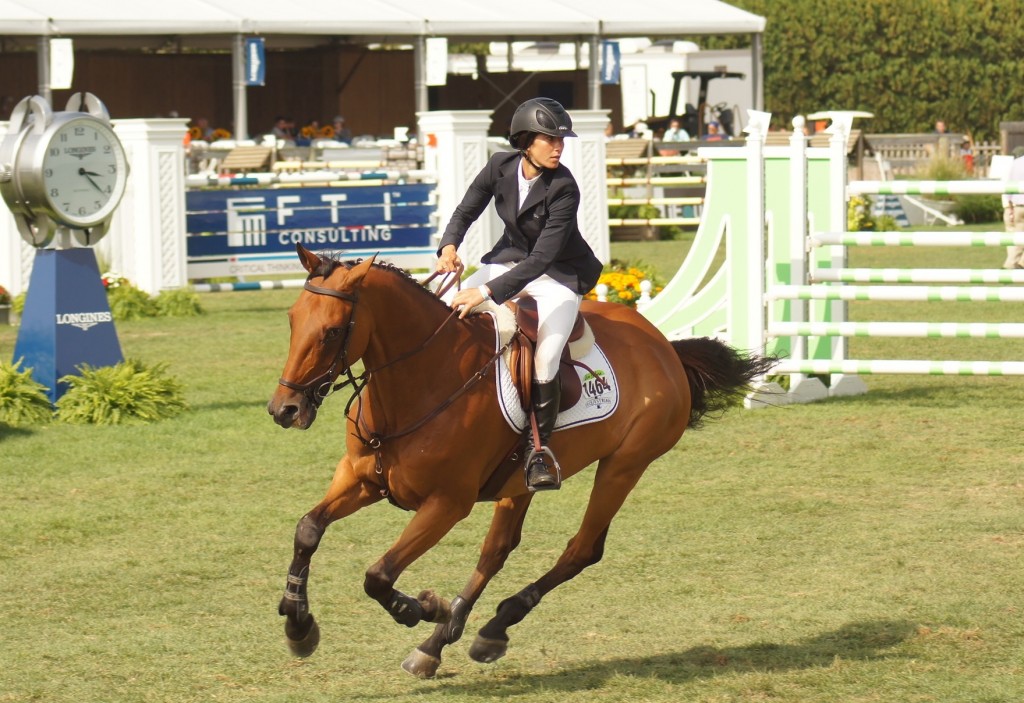 Lauren has always loved animals and especially horses. She began riding by going on trail rides near her hometown of Chicago, Illinois. At age 9, Lauren began to ride in earnest when a friend let her ride her pony. She got her first horse at age 12 and began to take lessons. She has always ridden English. One day she saw the jumper ring and decided on the spot that show jumping was for her. She then had to convince her trainer that she was ready for show jumping; even though the trainer felt she needed to continue with the basics, she won the argument! She loves show jumping, she feels it is very objective- size up the jump, get over the fence with no rails down, and do it in the fastest time possible. Between the ages of nine and thirteen, she divided her time between competing at horse shows and competitive soccer.

But during high school, she went full time into soccer and her horse became more of a pet and a friend. Luckily, her parents kept the horse. After high school graduation and before going off to college, a decision had to be made as to whether to keep the horse or sell him. Suddenly, she knew what she wanted to do for the rest of her life, be a professional grand prix show jumping rider. She could not sell the horse. She went off to Lake Forest College and completed her degree in 2006, with a major in communications. At the same time, she continued to compete at major horse shows. “I’ve never regretted getting my degree, as it has helped me every day in the horse business, to make contacts with important people, learn things and get places in my career,” she says.

After college she and her parents, Thomas and Eugenie Tisbo, moved to Wellington, Florida. They established Tequestrian Farms, now her home stable. This was due in part to the proximity of the Palm Beach International Equestrian Center and Winter Equestrian Festival. It gives her a chance to stay home and compete for part of the season.

At her current level of competition, she does most of her own training on a day to day basis. Though, she has two trusted advisors, Candice King and Anthony D’Ambrosio. “I count on them to act as sounding boards if I have a problem,” she explains. “They help me figure things out and then they let me come up with the solution, rather than just telling me how to solve the problem outright.”

After the Masters Tournament at Spruce Meadows, Lauren will head East again to The Gold Cup in New York, The New Albany Classic, Angelstone, in Ontario, Canada, for a World Cup Qualifier, and then the indoor circuit. She’ll have some heavy hitters to beat at the CN International, but then again, dreams do come true!