The Dyer Equestrian Trunk Show took place on the terrace overlooking the Grand Prix field at the beautiful Old Salem Farm. American Gold Cup attendees and athletes browsed through the clean and elegant line of apparel as Dyer’s founders, LeeAnne Colamarino and Erin Krasner, were on hand to show the line. Dyer Equestrian and JustWorld International celebrated the launch of the exclusive Dyer for JustWorld show shirt. 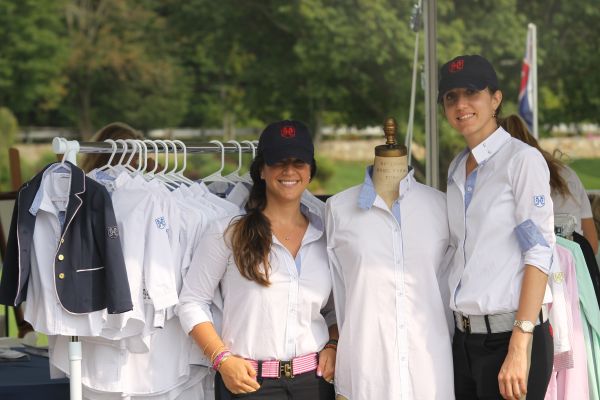 “We were inspired by their mission and their important work and wanted to give back to their cause,” said Krasner.  “We created the Dyer for JustWorld show shirt which features pops of JustWorld blue on Dyer’s signature white heritage show shirt. The JustWorld logo appears on the center back of the shirt to accent Dyer’s signature button back detail. With the sale of every JustWorld show shirt, fifteen percent of the proceeds will go directly back to the organization.”

“Dyer participated in the fashion show that we did at WEF two years ago and that’s how we first met,” said Sabrina Jurak, Sponsor and Event Coordinator for JustWorld International. “They sponsored a few looks from that show. Then they came back to us looking to do the show shirt. The shirts are beautiful. We are looking to do more co-branding in the future with Dyer.” 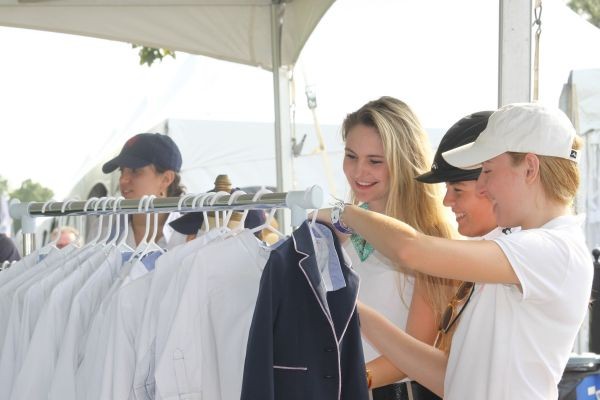 JustWorld’s goals are long-term, focusing its efforts on some of the poorest communities in countries such as Honduras, Cambodia and Guatemala where public education is limited or inaccessible, threatening many children’s chances for productive lives.

JustWorld is proud to be in partnership with The American Gold Cup CSI4*-W.  The show runs through Sunday, Sept. 15, culminating with the iconic $200,000 American Gold Cup CSI4*-W, Presented by Suncast on the grand prix field of Old Salem Farm.  The show marks the launch of the JustWorld International GIVE 4 GOOD Campaign, which allows donors and supporters to identify a particular cause they feel strongly about.

To learn more about Dyer Equestrian- ‘Designed with the Rider in Mind’- go to: http://dyerequestrian.com/.

For more about JustWorld International go to: http://justworldinternational.org/.