The Masters Are Coming

I’ll never forget the moment I walked through the entrance of my first Masters CSI5* show.

Stepping onto the red carpet was a tangible experience. It unfolded in grand style, leading the way to a stage-like centerpiece with white footing and strategic lighting that reflected flawlessly off the horses circling the area.

That was just the warm-up ring. Riders I’d only seen on my television casually passed-by, and vendor booths displaying designer brands beckoned from all sides. The red carpet continued, leading to a beautiful main competition ring under an arched ceiling with skylights on all sides. From beginning to end, every detail came together to create an atmosphere of pure elegance. 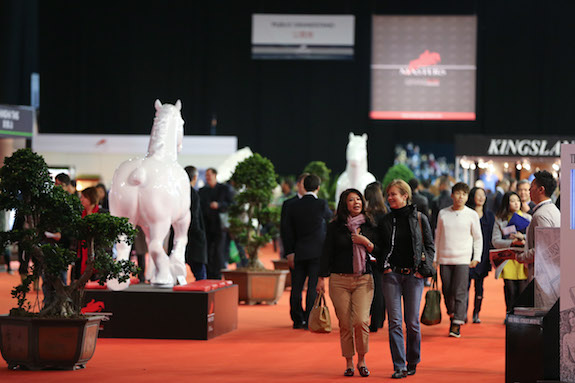 Coming to America
This fall, EEM World and West Palms Management are bringing that same Masters show jumping experience to the United States, for the first time ever. To be held at the Los Angeles Convention Center in Los Angeles, California this September 25th – 28th, it’s an exciting development for American show jumping, and a thrilling addition to the West Coast calendar.

The Masters Grand Slam Indoor is one of the most prestigious indoor show jumping events in the world. The Los Angeles Masters will complete a trio of Masters Grand Slam competitions that already include the Longines Hong Kong Masters and Gucci Paris Masters. Modeled after the Grand Slam of tennis and recognized by the FEI and United States Equestrian Federation as a CSI 5* event, the LA Masters will bring an incredible show jumping experience to California. The 2005 and 2007 FEI World Cup Finals that were held in Las Vegas, NV are somewhat comparable, but the Masters stands in a league of its own compared to those competitions.

Dale Harvey of West Palms Management, which produces top California show jumping competitions such as the Sacramento International and Del Mar National, is thrilled to be part of the LA Masters team.

“I was approached in December 2013 during the Paris Masters,” Harvey explained. “Christophe Ammeuw, founder of EEM World, asked me if I’d be interested in helping him with it and of course I jumped at the chance.”

A Five Star On Steroids
Harvey had the enviable task of visiting the recent Hong Kong Masters, held February 12th – 15th at the Asia-World Expo in Hong Kong for “research.” It was his first visit to the Hong Kong Masters, and served as fantastic inspiration for the up-coming American leg.

“It’s not just a five star show, it’s a five star on steroids,” Harvey said. “If the LA Masters is half the show of Paris and Hong Kong, we’ll be very proud to have it here in the United States.” 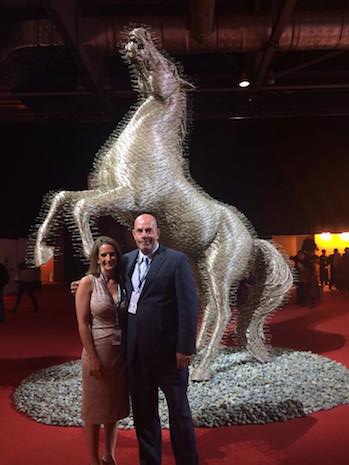 Harvey and Adrienne Karazissis, of West Palms Management, at the Hong Kong Masters

The Los Angeles Convention Center was chosen as the location for this American leg of the Masters not only for its accessibility (most horses flying in from Europe arrive at LAX), but also for its similarity to the venues hosting the Paris and Hong Kong Masters.

The entire infrastructure of the show is built from scratch, and the LA Convention center offers the space needed for the main competition ring, warm-up and additional exercise ring. Grandstands for 5,000 – 6,000 spectators will be built around the arena, and show stabling, vendors, et. al. will all be housed under the same roof.

For Harvey, it’s a big step-up from the competitions that he normally organizes, but he’s excited for the challenge. Harvey’s passion for creating new and innovative events is demonstrated by the annual Sacramento International Horse Show, which is constructed under a covered arena in Murieta, CA to mimic a European indoor show.

“I was so impressed with the events in Paris and Hong Kong, and I’m hoping to learn a lot about doing it the right way,” Harvey expressed. “This is a horse show that people dream about. It’s first class, there’s no dust, it’s taking every aspect of the show to a new level.”

The top 25 riders in the Longines FEI World Ranking List will be invited, and top West Coast grand prix riders will receive special invitations to compete as well.

At press time, tickets had not yet been released, and the final riders’ list was still being determined. Follow mastersgrandslam.com for updates and news as the date of the competition grows closer. This is one competition that I will not miss, and if you’re anywhere near Los Angeles this fall, you won’t want to miss it either. 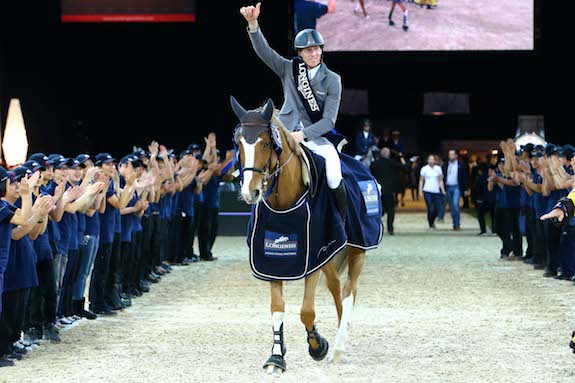 This article was originally published in the Apr/May 2014 issue of Horse & Style Magazine. CLICK HERE to read the entire issue online!