100 Days to Go Until the 2014 Alltech World Equestrian Games

Thursday 15 May 2014 marks 100 days before the Alltech FEI World Equestrian Games 2014 in Normandy begin. It is an important date, so be sure to put it in your diary. There are just 100 days to go before the start, on Saturday 23 August, of the planet’s greatest equestrian event, organised this year for the first time on French soil, with a thousand competitors representing 76 nations. To mark the launch of the countdown, the Normandy 2014 Organising Committee organised a special soirée on Wednesday 14 May in Caen’s legendary auditorium, Le Cargö. More than 400 people attended the event, including the Chairman of the Regional Committee of Lower Normandy and the Organising Committee, Laurent Beauvais, the Managing Director of the Organising Committee, Fabien Grobon, the new Mayor of Caen, Joël Brunneau, the General Secretary of the FEI, Ingmar De Vos, and Alltech’s marketing director Catherine Keogh. Here is a quick recap of this exquisite evening.

A Great Week for Normandy
It has been a great week for Normandy, with the Stade Malherbe de Caen football club moving up to the French championship’s 1st Division on Tuesday at D’Ornano Stadium and the “D-100” event of the Alltech FEI World Equestrian Games 2014 in Normandy the following day! Undoubtedly less turbulent than the previous day’s football match, the evening was nevertheless much appreciated by the many stakeholders present: representatives of the State, founding members, private partners, various stakeholders from the equine and tourist industries and the territorial project, a handful of representatives from the Club Normandie 2014, members of the Fédération Equestre Internationale (FEI), and representatives from the national and regional media.

It was a wonderful evening filled with surprises, namely the revealing of the line-up for the Alltech Music Festival, the unveiling of the programme of festivities, the promotion of Norman excellence, and much more besides.

Normandy is Ready to Host the Games!
The proceedings kicked off with a speech by Laurent Beauvais, Chairman of the Lower Normandy Region and the Normandy 2014 Organising Committee, who in just a few words reminded us that the event goes beyond the frontiers of sport, with 3,000 volunteers called up, hundreds of thousands of spectators expected in Normandy, and a 15-year legacy for the whole territory: “The fortnight of the Games will be a great moment of top-level international sport. But, in order to attract all kinds of spectators, it will also be festive, bustling, delicious, proficient, educational… In the Games Village, we will create a blend of two important cultures: horses and Normandy. Visitors will get an insight into all aspects of the horse, equestrian culture around the world, the savoir-faire of here and now”.

The video “making-of” of the 100 horse’s giant hoof prints carved in the sand of the Bay of Mont-Saint-Michel, one of the iconic places of Normandy, was then projected to the delight of the audience. A spectacular piece of sand art featuring giant, 2.3 by 2.5 metre horse’s hoof prints in a huge ‘100’ on the famous Normandy beach that you can discover in the video below:

Fabien Grobon, Managing Director of the Organising Committee for the Alltech FEI World Equestrian Games™ 2014, then presented a report about the project thus far, assuring the audience that everything would be ready for the big day (Saturday 23 August) and that more than 270,000 tickets had already been sold!

The evening continued with a look at the future Games Village. To the sound of trumpets, Sophie Delavaud, the Entertainments Manager, gave the audience an idea of what the Games Village would be like during the fortnight of competition, and one thing is certain: fun and conviviality will prevail. Horses will, of course, take centre stage, notably thanks to the Working Horse Village, which was presented by Olivier Linot from the National Committee of Land Horses. Jessica Gordon, the Entertainment Department’s equestrian expert, then made an entrance with French Caen Caen, the small white pony that was chosen as ambassador for Around the World with 80 Horses, to present the equestrian-themed entertainment activities that will feature in the Village during the two weeks of competition. The programme is rich and varied: younger visitors will be able to enjoy a special arena set up just for children, which will boast entertainment, shows, and fun and educational taster sessions, such as an “I speak horse” workshop led by famous Australian horse-whisperer Andy Booth, who was also present at the soirée. Adults will not be forgotten either, as the main arena will be the venue for numerous entertainment activities and shows that will give an insight into all aspects of equestrian culture.

Norman Excellence
Laurent Beauvais then came back onto the stage accompanied by Jean-Karl Deschamps, Vice-President in charge of territorial planning and sustainable development, and Anne Jumaucourt from the Horse’s Council to speak about how Norman excellence will be promoted during the Games thanks to the “Normandy Horse Trade Fair”.

After this talk, Fabien Grobon came back on stage to present the Club France, the partners’ areas such as the Alltech Equisphere, and even the catering options planned in the Village. It is an opportunity to showcase the recipes and produce of French and regional gastronomy.

A Finale With the Alltech Music Festival
The moment the audience had all been waiting for was without a doubt the announcement of the line-up for the Alltech Music Festival, presented by Catherine Keogh, Alltech’s Marketing Director, and Christophe Moulin, Manager of the Cargö auditorium and of Arts Attack. On the menu there will be 8 evening concerts held over the 15 days: 30 hours of live music performed by a mixture of local and international artists in a bid to provide something for everyone. To unveil the different artists in the line-up, the DJ subjected the audience to a giant blind test! 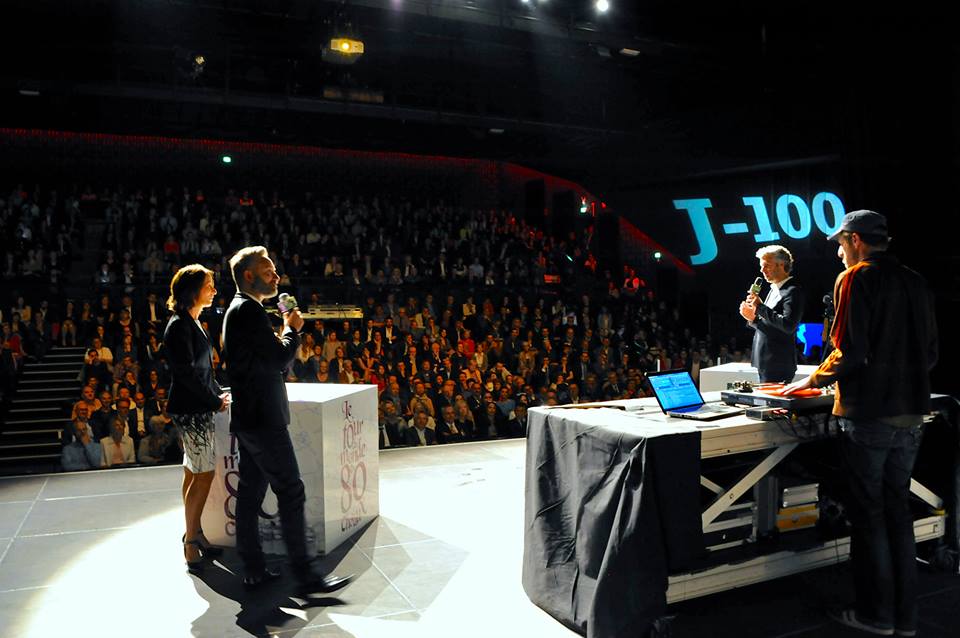 Catherine Keogh, Marketing Director of Alltech and Christophe Moulin Director of the concert hall of the Cargo of Caen presents the program of the Alltech Music Festival

Our ambassador Pierre Durand, the 1988 Olympic champion, then took to the stage to greet the audience. The party continued until midnight, when the 100-day countdown officially began with the presentation of a panoramic photo of Mont St Michel taken especially for the occasion.

It was a wonderful evening’s entertainment just 100 days before the festivities begin, to remind everyone of the international dimension of the world’s greatest equestrian event, as underlined by Ingmar De Vos, General Secretary of the Fédération Equestre Internationale (FEI) : “Soon we will be able to see the world’s best horses and riders compete for medals in the heart of Normandy, which is, thanks to its historic heritage steeped in horses and equestrian culture, the ideal setting for this 7th edition of the Games. We will now count down every minute of every day until 23 August, when 15 days of top-class equestrian sport will begin.”

We look forward to seeing you in 100 days, on 23 August at D’Ornano Stadium in Caen, for the opening ceremony of the Alltech FEI World Equestrian Games 2014 in Normandy!