The legendary Happy Z wins her 60th grand prix where it all began and heads into retirement.

On July 31, 2005, Happy Z took home the blue ribbon in the $25,000 Cherry Capital Classic, her first grand prix victory. Now, nine years later, Happy Z jumped to her 60th win back where it all started at Horse Shows by the Bay in Traverse City, Michigan.

“It’s crazy to think about,” said Genn. “We were talking about No. 60 happening before the class. It’s just incredible.

“Sixty means I will never have another horse like that,” he added. “I will maybe have horses that jump bigger fences, maybe that do bigger classes, but there will never be another Happy Z.”

It almost seemed as if Mother Nature was even rooting for Happy Z, a 16-year-old Dutch Warmblood mare by High Valley Z, during the $40,000 CMJ Cherry Capital Classic. After thunderstorms in the morning, the skies cleared and the humidity increased, creating a steamy atmosphere. But just as the seven-horse jump-off was to begin, a menacing bank of clouds began to develop on the horizon and the temperatures dropped.

As the jump-off commenced, it became clear that the storm would likely impact those later in the order, although rails fell for the first three entries, Attack II and Amanda Derbyshire, Condero 3 and Bob Brawley, and Wilhelm’s son Ryan aboard Cookie Monster.

Molly Ashe and Pjotter Van De Zonnehoeve, the fourth in the order, posted the first clear round in 42.63 seconds just before the first drops began to fall.

Happy Z and Genn then entered the ring with the rain blowing in. “She’s picky about footing and weather. So, it all went in our favor with the weather cooling off, and the rain came actually as a favor to me,” Genn, who grew up in Germany, said. “She likes the cooler weather, too, and she doesn’t like the sun or when it’s hot.” 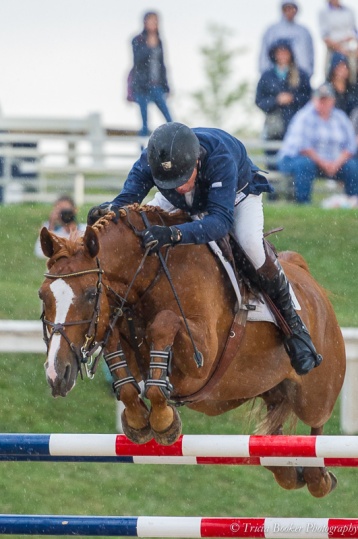 Happy Z and Genn over the first round track, riding through the rain

After negotiating the twisty track without fault, they stopped the clock in 39.16 seconds to the roar of the spectators huddling under tents and standing in the downpour to watch history in the making.

“She felt great in the jump-off,” said Genn. “She steps it up. We’re alike in that way. In those unusual circumstances, the rain pouring, it’s fun for me. I step it up a little bit more, and we were both riding hard, and she was amazing.”

Erin Haas aboard As Di Chupito had the unfortunate luck of stepping into the ring in the worst of the storm, and she chose to withdraw.

With Happy Z’s time leading the way and the rain pelting down, Genn chose to withdraw Bugatti from the jump-off and give Happy Z her well-deserved celebration. Even in the adverse conditions, the grand prix riders who battled Happy Z in the jump-off returned to the ring to receive their ribbons and salute a champion.

With a tribute to the 16-year-old Dutch Warmblood (High Valley Z–Anais-Anais Z) already scheduled during the grand prix festivities to celebrate her remarkable career, it was a perfect ending to a fairytale story. 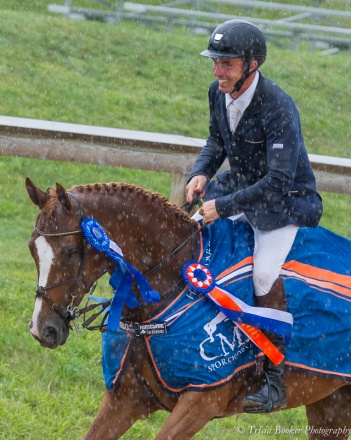 “This is amazing! Happy has done that several times now because I’ve been talking about slowing down with her and thinking about breeding her,” said Genn, of Lebanon, Ohio. “And every time I talked about it she stepped up big the next time. So, I would say, ‘OK, let her go a little bit longer.’ But this is it, because this was the perfect ending to a beautiful story. I would feel selfish to go on with her. She’s done so much for me, and it’s hard to keep her happy and healthy. She’s never had a major injury, but it’s little things. Now, she will begin another chapter in her life, and I’m sure a lot of people will want to have her foals.”

Following the grand prix awards ceremony, Happy Z and Genn took one more solo lap of honor with the blue ribbon flying on her bridle and Genn grinning and waving to the crowd.

In addition to the awards she won for the victory, Happy Z received a special cooler, ribbon and basket of treats from show manager Alex Rheinheimer and Patrice Schreiber in recognition of her many memorable accomplishments at Horse Shows by the Bay.

Happy Z has amassed more than $1 million in career earnings, winning all over the country. In 2008, the height of her career, Happy Z won nine grand prix events.

In addition to her significant earnings, Happy Z also leads the nation in the Clear Round Category. Prior to tonight’s class, out of 172 total classes, Happy Z was clear 112 times, resulting in 71 double-clear performances and 45 wins out of those clears.

Last year, Happy Z and Genn logged their 55th victory here in Traverse City by winning the $30,000 Grand Traverse Bay Grand Prix. Her most recent wins came this spring in the $25,000 Pin Oak I Grand Prix in Katy, Texas, and the $50,000 Gulf Coast IV Grand Prix in Mississippi.

“She has an amazing following, and I appreciate everyone who’s loved her over the years and has given her treats,” he said. “No matter where I go, she has a fan club. In Houston, there were a bunch of kids, they don’t know me and I don’t know them, but they have a sign that says, ‘Go Happy! We love you!’ So that’s very special.”

Here in Traverse City the sign that everyone saw as Happy Z stood center ring receiving her final send-off wasn’t handwritten by children. Instead, it was yet another sign that it was time for Happy Z’s competitive career to come to a gallant close: a large white bird circled low over Genn and Happy Z while the photographer snapped the final image.

“Did you see that white bird flying around us? It was like someone let it loose,” said Genn. “I don’t really believe in that sort of thing, but that was wild. That was wild.”