Bit of Bliss: The Pop Up Edition

Donna Chopp doesn’t usually believe in signs. But on July 26, she found herself being pulled into an unexpected situation as she sat ringside during the $30,000 Equine Insurance Grand Prix at Sonoma Horse Park.

Let’s back up a little. Donna Chopp and her fiancé, Joe Parker, are regular faces at Sonoma Horse Park, and within the equestrian world up and down the West Coast. Together they own and operation Equine Insurance, a busy agency with offices in several locations throughout California. Their sponsorship at Sonoma Horse Park extends to the annual $30,000 Equine Insurance Grand Prix. As Donna and Joe sat with friends during the class, and Sonoma Horse Park Manager Ashley Herman, the subject of their ever-pending nuptials came up.

“When are you two going to get married, anyway?” Donna was asked. After 22 years of working together, six years of dating and two being engaged, Donna and Joe hadn’t yet set the wedding date.

Jokingly, Ashley suggested the couple be married at Sonoma Horse Park the following week, after the Giant Steps Charity Classic Gucci Gala. After all, Sonoma Horse Park had recently held another wedding, and after the Gala, the VIP berm would be decorated for the Gala with beautiful white flowers, perfect for a wedding.

“I said to Ashley, ‘are you kidding??'” Donna recalls. “And Ashley said, ‘no, we’ll take care of everything, you should do it!”

As it just so happened, there was a horse named Wedding Day entered in that afternoon’s grand prix. Everyone joked that if that horse won, it would certainly be the sign that Donna and Joe should get married the following week. Donna agreed, while in the back of her mind thinking that it was a 99/1 longshot chance that Wedding Day would actually win the grand prix.

But wouldn’t you know it, Haley Schwab rode Wedding Day to her very first grand prix victory that day, and as Donna joined the victorious horse and the rider’s family in the win photo, the wheels started spinning in the back of her mind.

Donna and Joe agreed to set the date: on Saturday, August 2nd, after the Gucci Gala, there would be a wedding.

On Monday, Donna and Joe went and got their marriage license. On Tuesday, Donna found a dress, and even got it fitted. On Wednesday, the couple returned to SHP for the Gala week of the show.

And on Saturday evening after the Gala, as Horse Park staff arranged a podium and flowers, Donna ducked into the Italian Equestrian vendor trailer to change into her wedding dress. With friend Bitsa Freeman officiating and in front of a lingering group of gala-goers who had been tipped off that a wedding was taking place, Donna and Joe exchanged their vows.

“I was just touched that everyone pulled it all together,” says Donna. “A ‘Pop Up Wedding’ is what I started calling it. It worked out perfectly and it was just wonderful.” 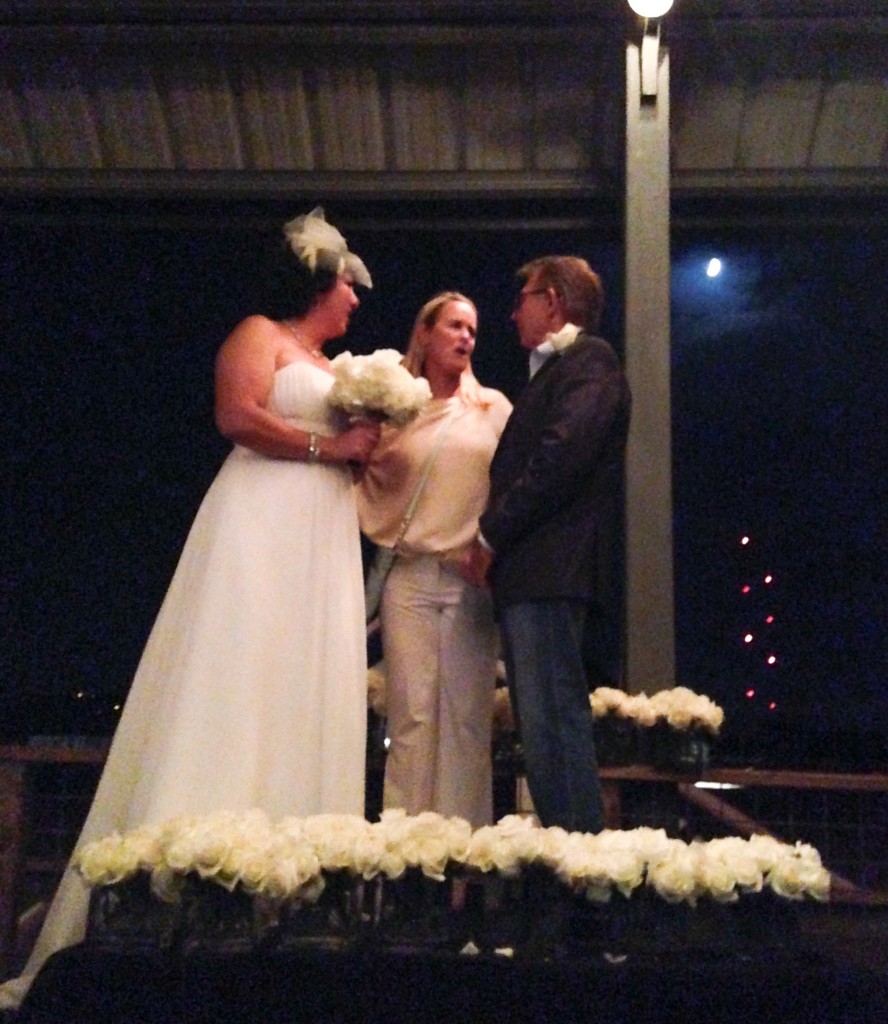