When at WEG: The Highs and The Lows

In the French village of Maizet, they love Americans. It sits less than 50 kilometers from the beaches of Normandy, and memories of Americans saving the French people to end the second World War are still fresh. The tiny village outside Caen, which was spared from bombing damage, is straight from the pages of a book. 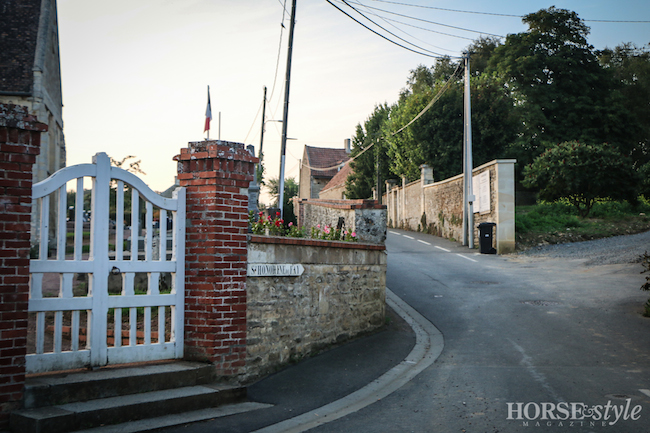 The main drag in Maizet

This is where I am lucky enough to stay during the Alltech FEI World Equestrian Games, which are currently taking place about 15 kilometers away from Maizet. Let’s not talk about how this was my second stop, after discovering on Monday that the media hotel booked for me by show organizers months ago was –to put it nicely- “unsuitable” for this lifestyle magazine editor. If I wanted to sleep in a tiny, odd-smelling room within arms reach of a six-lane highway and a KFC, I would have stayed in the USA.

But I digress. The hotel snafu was an interesting wrinkle, but happily, not all French agree on that particular definition of acceptable lodging. I am, of course, in France for WEG, and these types of adventures are to be expected. The days begin in Maizet, where the morning sun streams in through the window of a 300-year old, three story stone farmhouse where I’m staying. Our gracious host presents a breakfast of croissants and coffee on fine china and silver, and then drives us to the D’Ornano Stadium and I am forever grateful (“us” is colleague Jackie McFarland of EquestriSol, who was my savior from the media hotel.)

And now here we are. Two days into a marathon week of show jumping at the WEG. You’ve heard that our superstar Beezie Madden is proving once more why America is blessed to have her: with two clear rounds with Cortes ‘C’ she’s sitting 2nd individually and has helped the USA earn a team silver medal position going into today’s team final. You’ve read about the Frenchman Patrice Deleaveau who is quickly gaining hero status by leading the standings after Round 2. And you might have seen a few pictures like this, but in no way can a photo convey the tremendous emotion of over 14,000 people screaming for the same horse and rider as they exit the ring.

It was still early on in the competition and already, the crowd couldn’t help itself – alternatively cheering their rider and hushing each other as he approached the final fences on course. 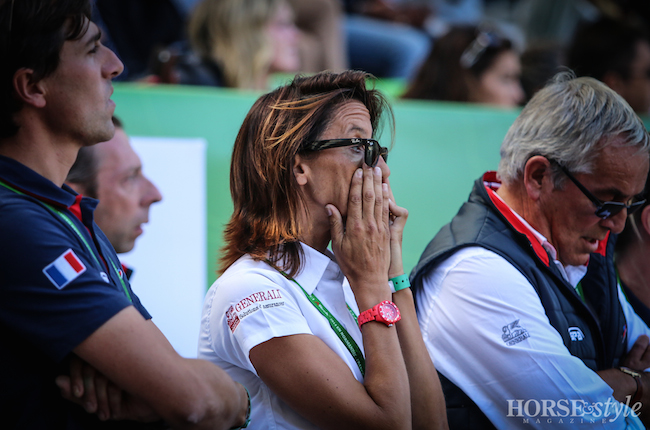 Team France watches Patrice’s round anxiously from the sidelines. 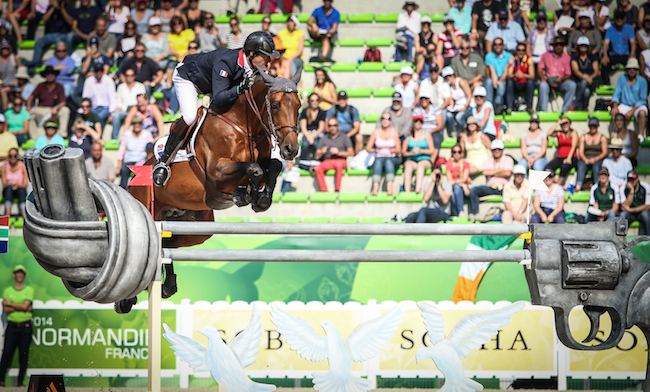 Patrice Deleaveau and Orient Express HDC over the final jump of Round 2. The crowd was already screaming.. 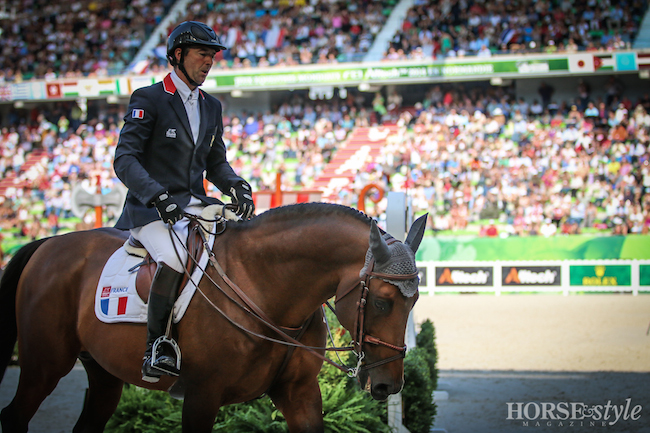 ...and Patrice wore an expression of absolute relief as he left the arena.

Speaking of emotion, Brazil couldn’t contain themselves, both when Alvaro Doda de Miranda jumped a clear round, redeeming himself after an uncharacteristic fall from his horse the day before in Round 1, and later at the end of the day, when Marlon Modolo Zanotelli and AD Clouwni also jumped clear for Brazil. That’s Doda below, 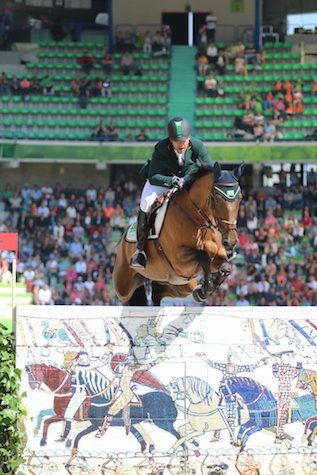 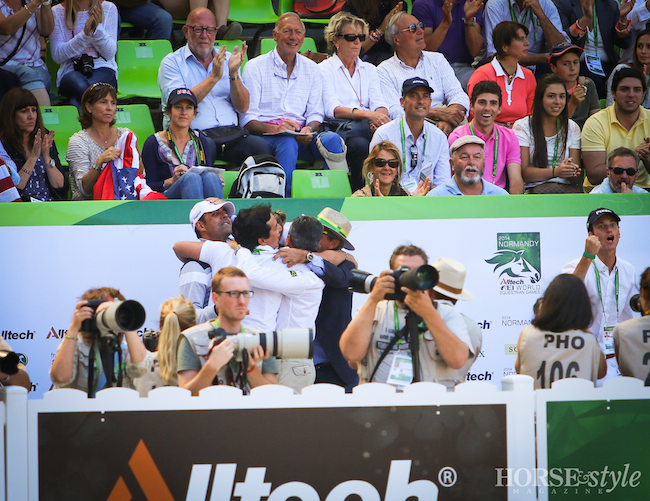 Group hug! That’s Doda on the left, in the midst of a group celebration after Marlon also jumped clear.

It’s going to be like that in today’s competition, which concludes with a medal ceremony. The tracks have already been hard, and they’re getting harder. This wouldn’t be a world championships if the courses weren’t set up to test the maximum skill of the horses and riders that are here. That said, we’ve seen a lot of falls, and several very scary crashes. Yesterday was the first time that I’d ever seen a rider knocked absolutely out cold from a fall at this level of show jumping. We hear that the Chilean rider who was carried out of the ring on a stretcher is going to be fine, thankfully. As of today, the 154 initial starters have been whittled down to 76 pairs on day 3, and only at WEG is 76 rounds considered a “short” day. There’s still reason to be extremely optimistic for Team USA, although today everything will be on the line during the team final.

I’ll attempt to tear myself away from the croissants and morning views in Maizet to check in again after today’s Team Final. It’s sure to be another exciting day of extreme highs and lows. And with luck, the USA will land on the side of the highs! 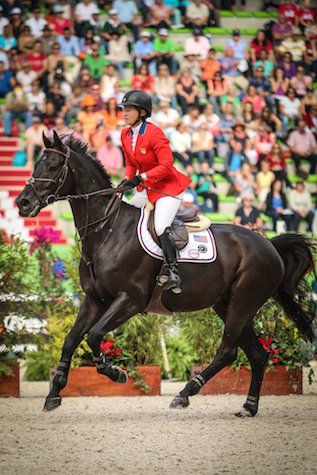 Our hero! Beezie Madden and Cortes ‘C’ have been in fine form. 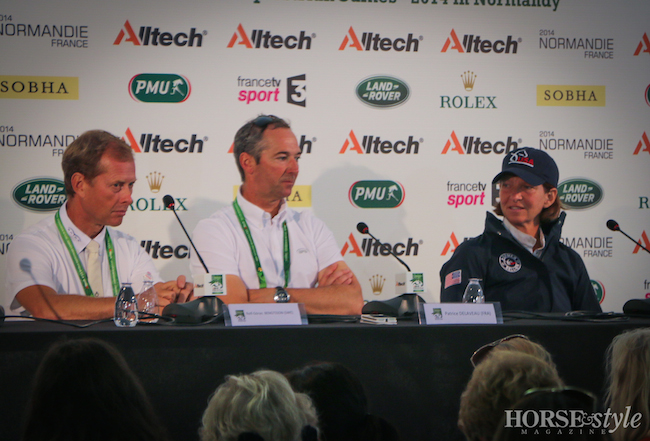 At the Round 2 press conference: Sweden’s Rolf-Goran Bengtsson, Patrice Deleaveau, and Beezie answer questions from the media.