Behind the Scenes at the Longines Los Angeles Masters

Andy Gillissen and his team only had one day to prepare for the 187 horses that are currently stabled in the Los Angeles Convention Center’s underground parking garage for the Longines Los Angeles Masters, September 25 – 28. That short turnaround time in the huge convention hall a stone’s through from The Staples Center in downtown LA kept the venue’s rental price in check, but the efficiency of the setup is just as much a testament to how good the Belgium-based stabling manager is at handling logistics. It’s his first time barn managing in the US, and unlike the European shows, the stabling at this one had to be split into three sections: European, Domestic FEI, and Invitational.

The European horses are fresh off a plane from overseas a little over a week ago (Andy is also the architect behind their travel plans.) They were the first to arrive at the Convention Center, serving out their 48 hours of quarantine on site rather than at the airport. But before they stepped onto the grounds, a plastic protective covering was placed onto the cement floors and covered with a padded layer of carpeting. In the stalls, mats were placed over the carpet before shavings were added for bedding. 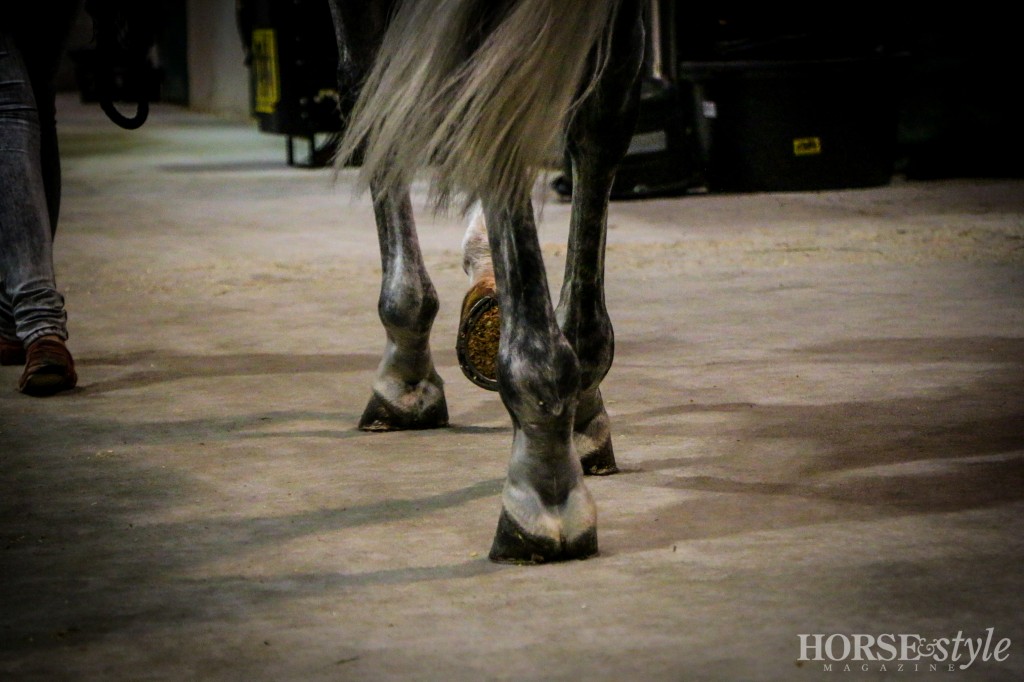 Each rider with a horse flying from Europe was allowed only 125 kilos of supplies per horse onto the flight. This explains why the European stable row is less cluttered than the domestic barns – those aisles are crowded with tack trunks and extra equipment. The real chore at this show is for the groom who has a horse in two different sections of stabling, requiring extra legwork and time to run back and forth between the two. The nature of the week’s schedule, with late night classes and very early, assigned hacking times in the limited riding space makes for very, very long days for grooms, horses and riders. It’s not uncommon to find a groom (or two, or three) napping in a barn aisle during quiet moments between classes.

Not much separates the two domestic categories of horses, just a larger, fenced off section of parking lot between the domestic from the European, but all three categories of horses must remain separate when exercising in either the warmup arena or the small longing ring. Andy tells us that there are 2-3 hour time slots allotted for each. And when it’s go time, the horses walk up a circular ramp that’s normally used by cars to travel the distance between the underground level and the main floor, finally reaching the warmup and show arenas. 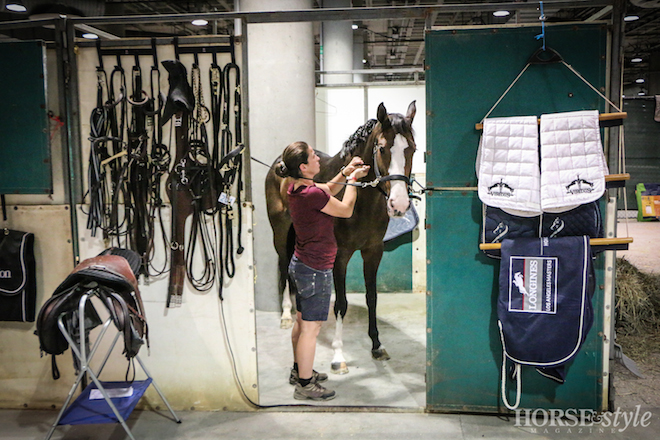 Preparing for the evening ahead 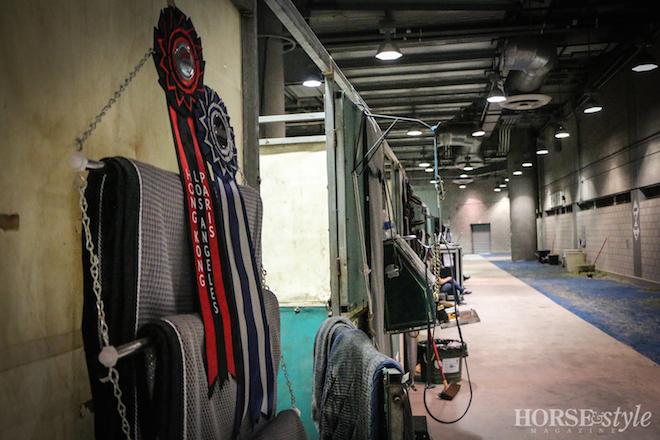 The temporary stabling was constructed in an undeground parking garage. 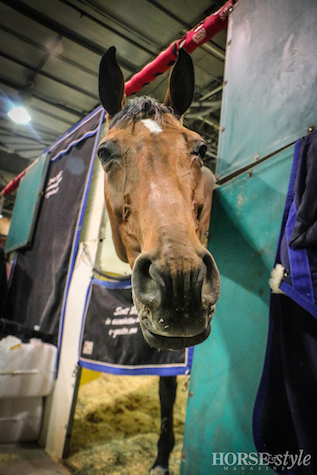 Visiting with one of Scott Brash’s horses. 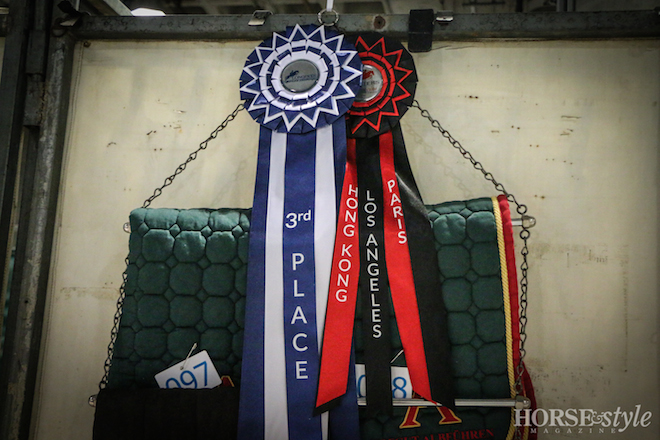 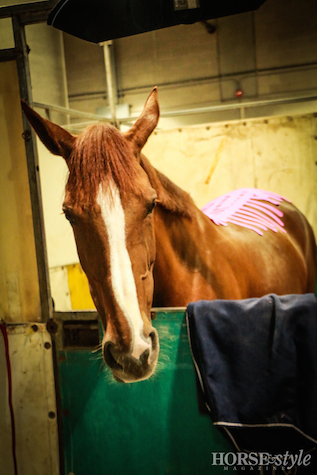 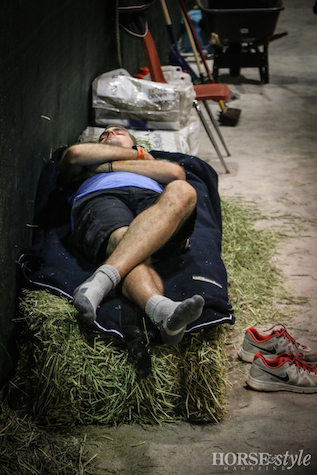 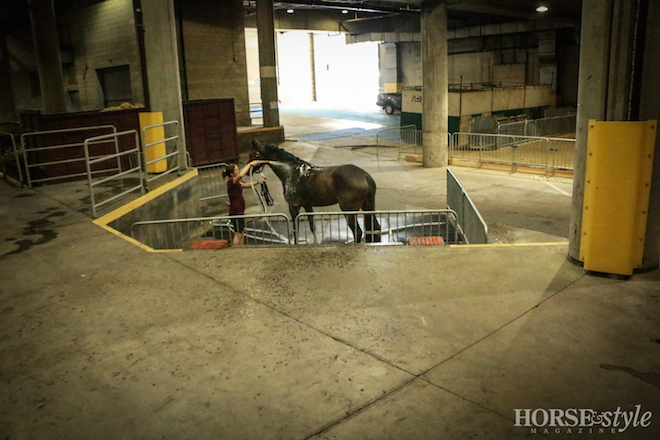 A truck bay one week, a wash rack the next! 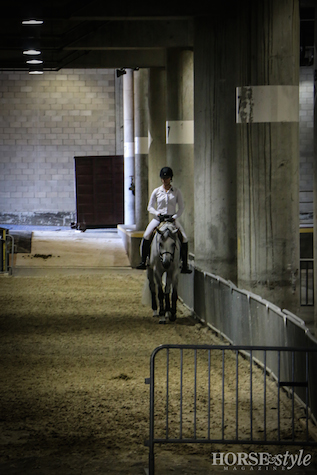 There’s a small hacking arena next to the stabling area. That and the main warm up are the only places to exercise the horses. 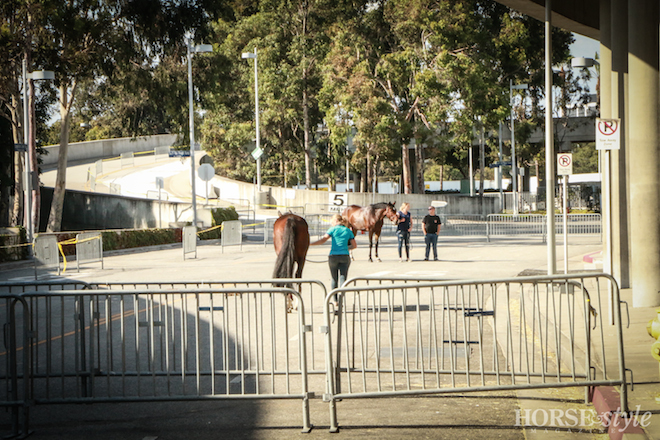 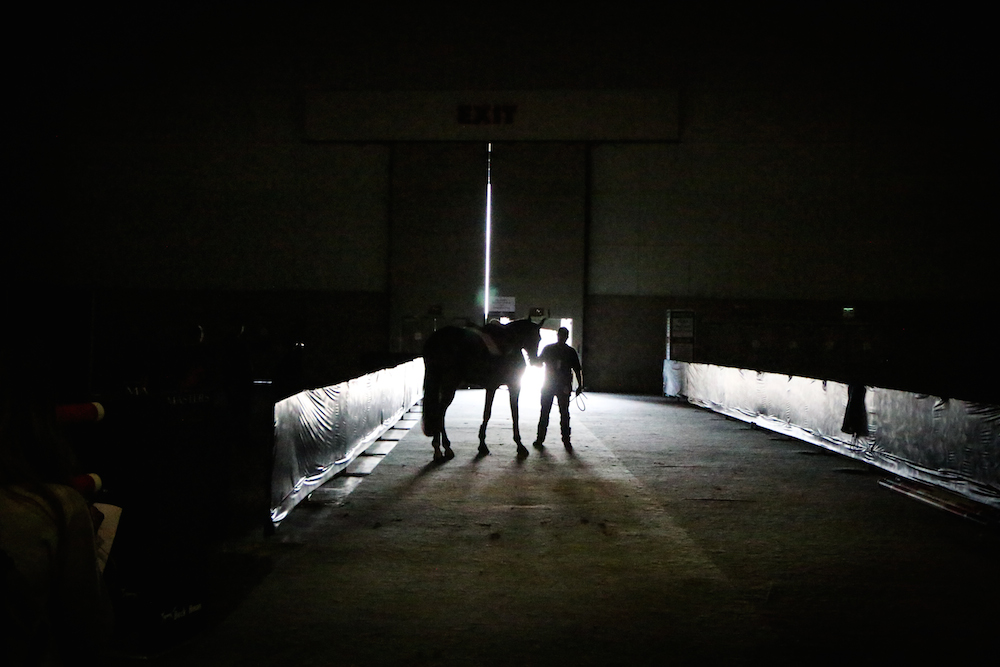 On the way to and from the main arenas

All of this impressive stabling will go down as quickly as it went up. Of the 54 horses that traveled from Europe, 50 will return on flights scheduled for Monday and Tuesday nights. And by Wednesday, there won’t be a trace of horses left in this large, concrete building—save for, perhaps, the faint smell of barn, the familiar mix of hay, horses, and leather). Until then, take a drive around the Convention Center to the far back parking lot for a chance glimpse of horses clopping around on the pavement. It’s your one and only chance this year to see the world’s best horses set against the urban backdrop of Los Angeles.

The Longines Los Angeles Masters continues through September 28th. Tickets are available to attend the $400,000 CSI5* Longines Grand Prix at 1:30pmPST on Sunday, September 28th. Or view the livestream at www.mastersgrandslam.com