A Night in Pictures: The Rolex Finale Grand Prix at WEF

It was a long way from swimming laps in the dark.

That was what McLain Ward was doing three years ago to the day, during the 2012 WEF finale grand prix jumpoff. A knee injury early in the season had kept him out of the saddle, and he was frustrated, and angry, that he wasn’t riding on the evening of March 31st, 2012.

He watched the first round of the grand prix from the VIP tent, and then left for his home just behind the showgrounds, close enough to hear the crowd and announcers from his backyard. “I was so frustrated that I wasn’t competing, so I went home to swim laps, and I could hear Daniel win.” Ward remembered. That year, the stars of the show were Daniel Bluman and Ian Millar, who battled it out in a close race for the 2012 win. Ward had unhappily spent the season on the sidelines, impatiently waiting for his knee to heal. As he swam laps and listened to the show go on without him, he undoubtedly knew that his chance to put Bluman in his place would eventually come, and that chance arrived last night. “I turned after the first jump and I said ‘I’ve got to get him back, I’ve got to get him back’,” Ward recounted. “This was a test, this grand prix, but it’s the finale of the season, and obviously I like these results!”

And Ward had plenty of company to cheer him on to this win. It seemed that everyone who had perhaps stayed home during the previous weeks of WEF grand prix competition got motivated to come out for the final Saturday Night Lights of the 2015 Winter Equestrian Festival – the Palm Beach International Equestrian Center was Packed (with a capital P) last night for the $500,000 CSI5* Rolex Grand Prix. Full results are here, enjoy this night in pictures, and see you next year, WEFSNL! 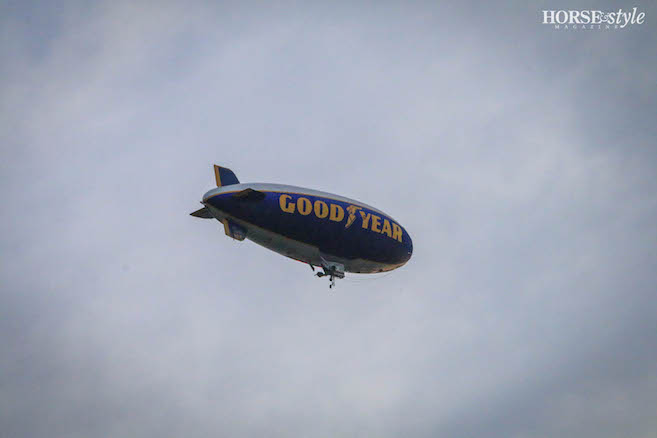 When the Good Year blimp appeared over the International Arena, all who tilted their faces up to the sky knew that this was not going to be an ordinary night of show jumping. 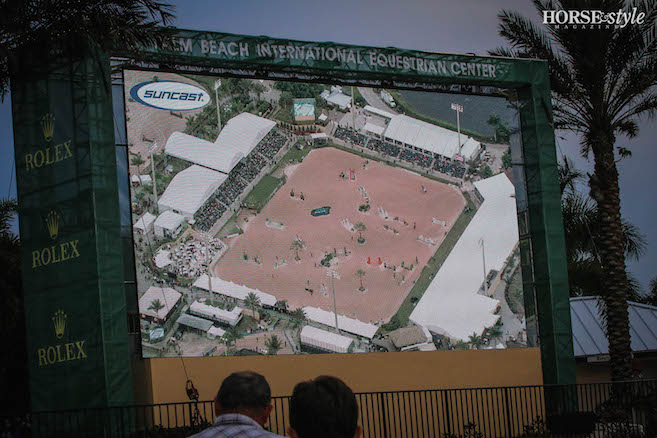 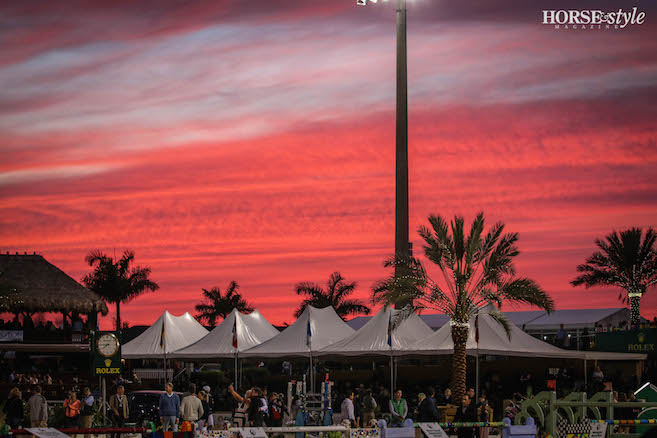 The weather was a far cry from last year’s downpour that canceled the 2014 edition of the finale grand prix. Thank goodness for clear skies this year! 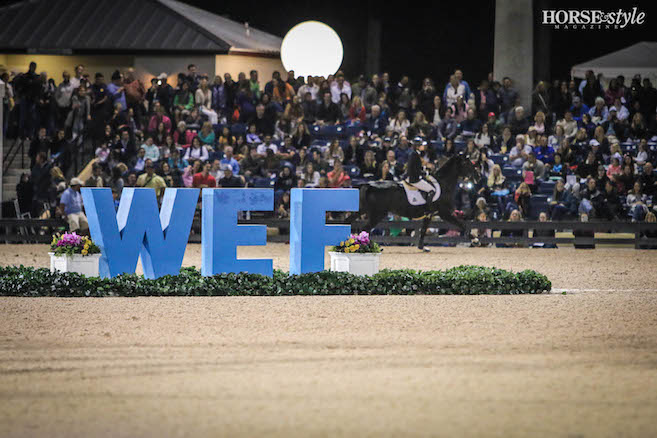 It was standing room only, all the way around throughout the grand prix. 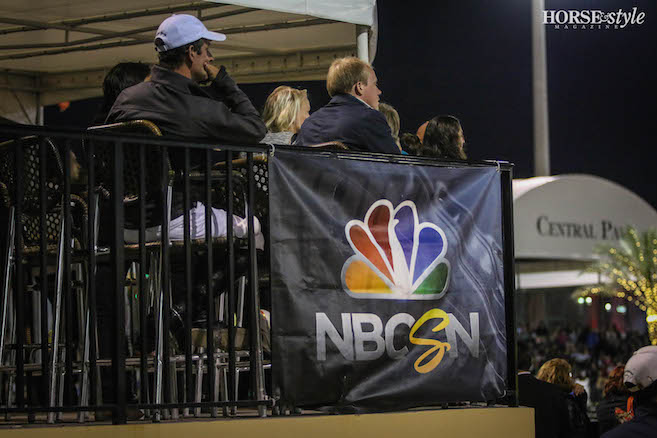 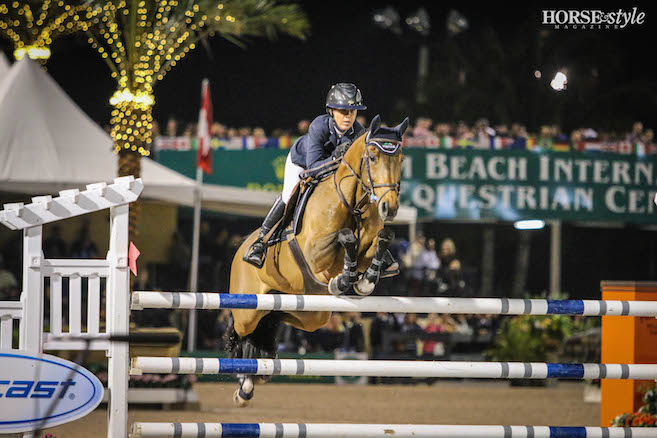 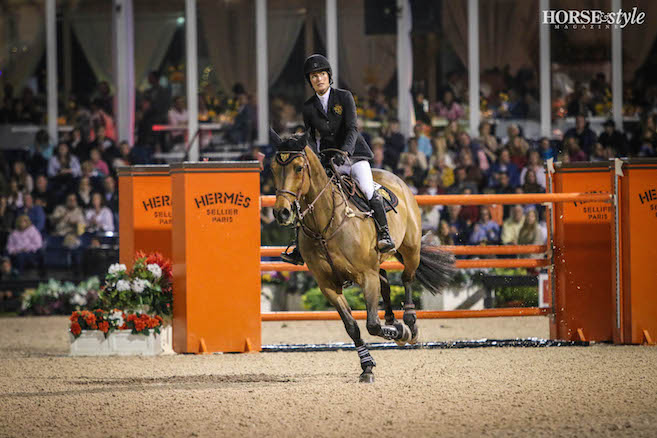 The look of ‘$*$^&#@!’ Jessica Springsteen checks her score after a four fault round. 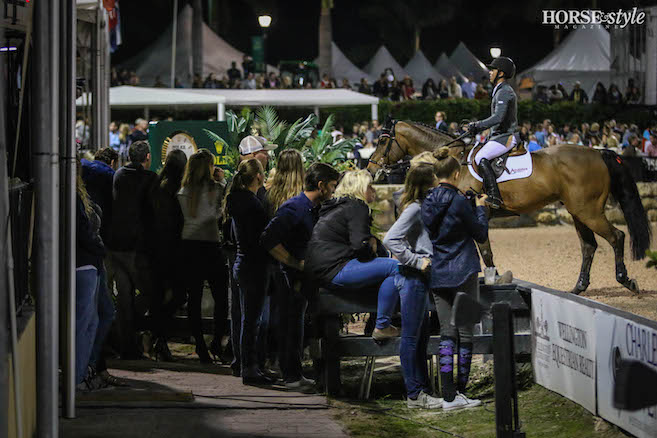 Kent Farrington makes his way out the gate after a round that failed to earn him a jumpoff spot. 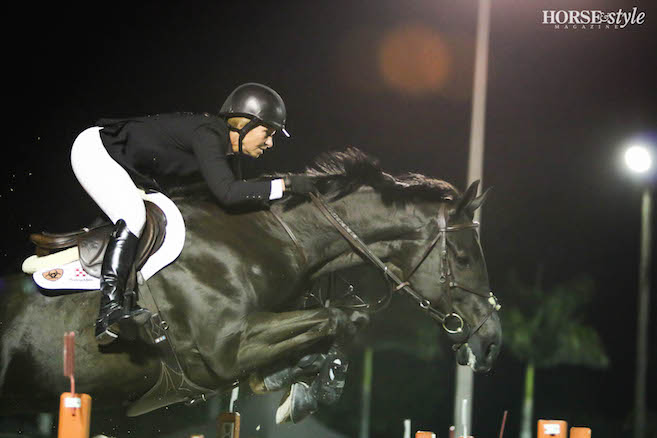 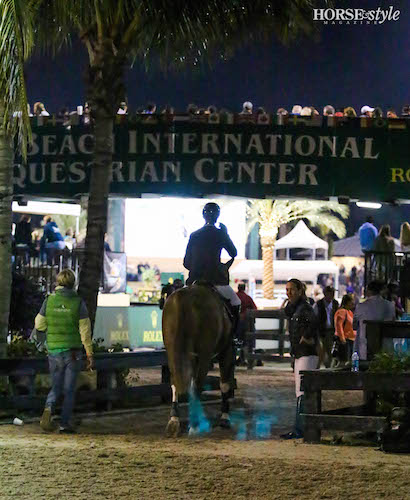 And into the light they go – Ben Maher and Diva approach the ingate. 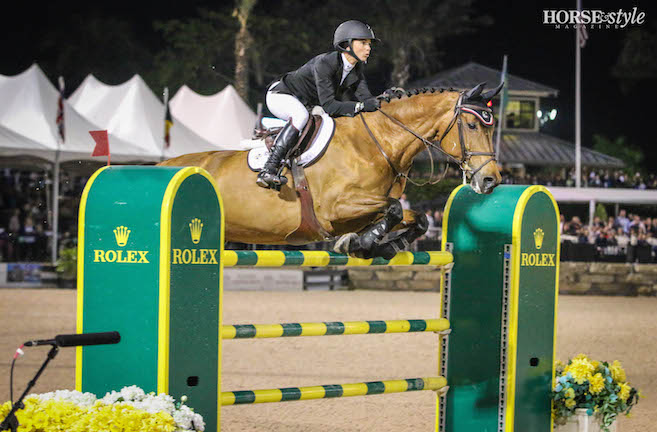 Georgina Bloomberg and Lilli were first clear and first to go in the jumpoff. A rail relegated them to third place 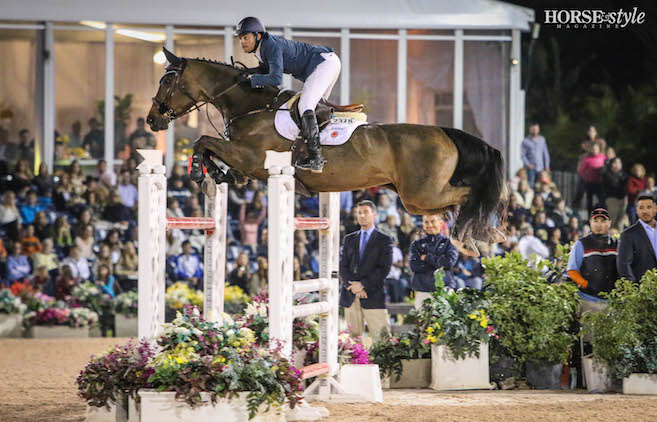 Now that’s focus! Bluman was wide-eyed as he and Concreto Sancha La Silla fly to the next fence in the jumpoff 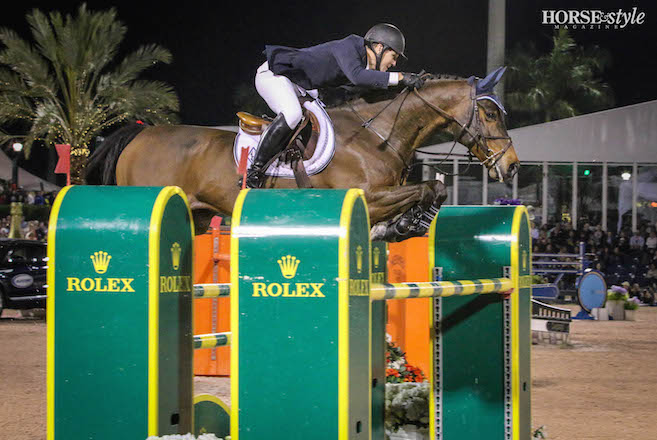 Ward was NOT going to let Bluman steal this win from him. He took down an early rail in the jumpoff, and then turned on the speed aboard Double H Farm’s HH Carlos Z to outrun Bluman’s time. 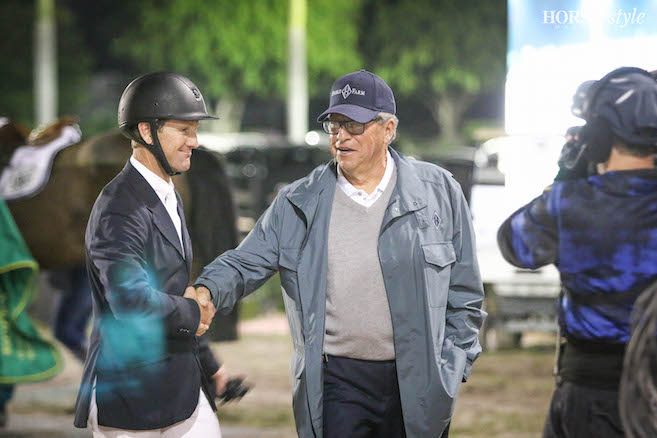 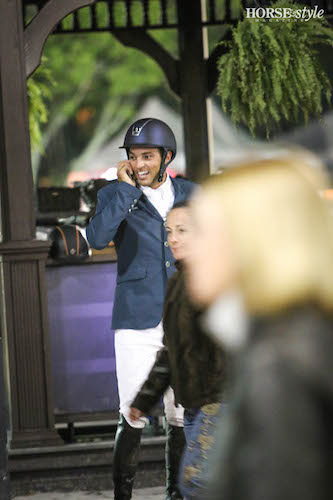 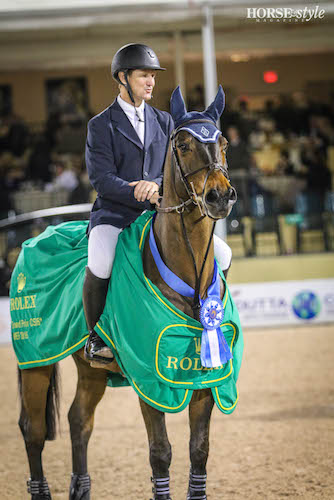 Is that a smile we see? Ward and Carlos Z stand for awards and accolades. 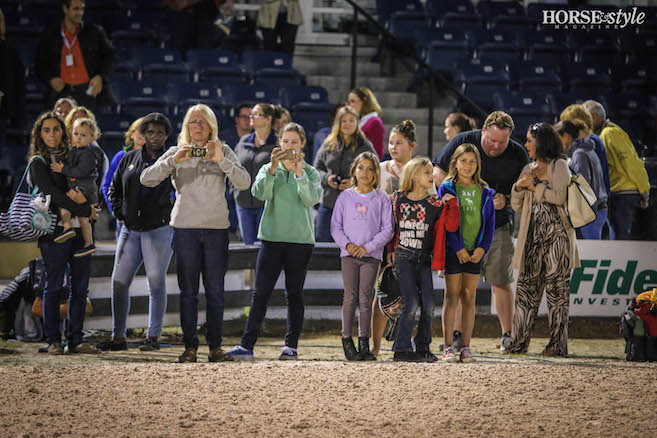 Fans were especially eager to get up close with their idol. The crowd rushed into the arena before the victory gallop, and had to be shooed to the sidelines so that the riders could pass! 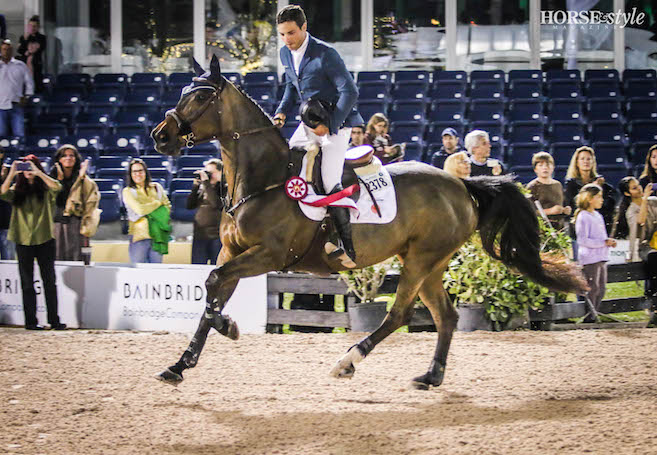 Bluman and Sancha La Silla do that victory gallop thing. 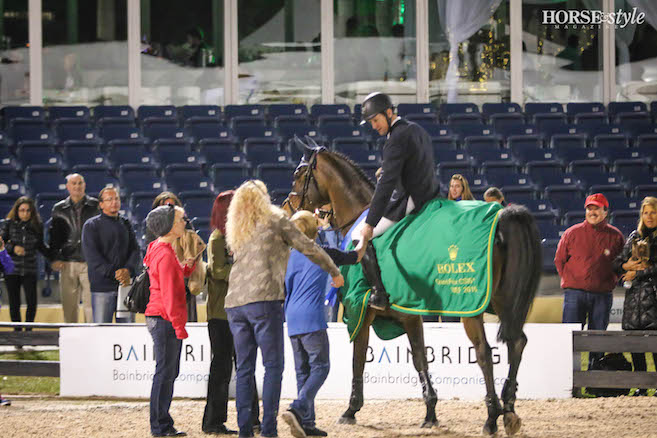 Ward circled back around and took a moment to greet his fans. Many nights were made. A class act! 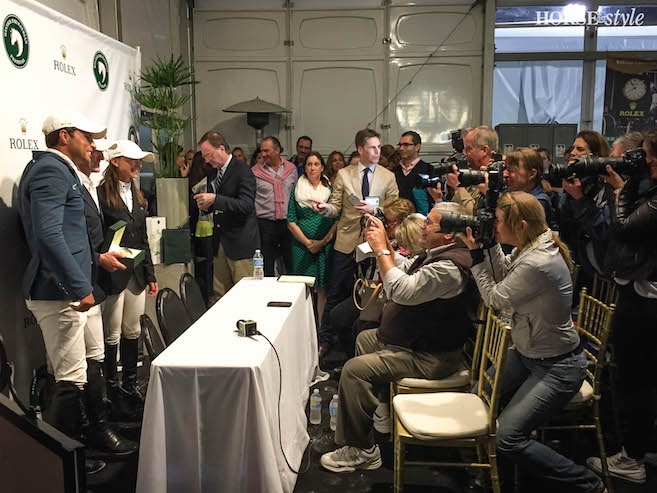 This is what the limelight looks like! The top three posed for the equestrian media corps