There’s no stronger indication that a course will prove tricky than concerned comments straight from the riders’ mouths. And for Friday night’s Round Two of the Longines FEI World Cup Jumping Final, competitors vocally realized, in the midst of the course walk, that the track appeared more difficult than the one they had ridden the night before. Sure enough, the rails came crashing down all night, despite an early (and deceptively easy) clear logged by the second pair to compete, Norway’s Geir Gulliksen aboard the bay stallion Edesa S Banjan.

Riders entered the small indoor arena in reverse order from final placings of Round One. And the penultimate challenge, a triple combination – a wide oxer to a slightly less wide oxer to a vertical – claimed the most faults. Riders’ frustrations were palpable and perhaps best expressed by Martin Fuchs’ loud growl – his failed attempt to power his horse over the combination’s middle jump. Patrice Delaveau, who sat in a tie for third following Round One, surprisingly bowed out of competition after his horse refused to jump that very oxer (following another uncharacteristic refusal earlier in his course).

“It was a difficult test,” course designer Anthony D’Ambrosio explained following the event. “I think it worked out the way I expected.” That’s to say that only six riders made it into the jump off – a number that D’Ambrosio predicted earlier in the evening. “I was lucky on how many would go clean – I don’t get that right all the time,” he joked.

It seemed to be in the rider’s decision of strides and distances to keep the rails up in the triple, which followed a single vertical and a bending line. But whichever the choice – either a collected six stride or a galloping five – he or she had to commit and execute to perfection, D’Ambrosio opined. As the many rails began to drop in the combo (and a few times, horses barely crawled and mostly crashed through the middle oxer), riders and spectators realized that the holding six didn’t leave enough impulsion to clear the three jumps without fault.

Lucy Davis and Barron were the next pair to follow Gulliksen into the jump off (with 17 rounds in between), and she opted to ride the five after originally planning for the six during the course walk. “I decided to switch to five after seeing everyone else have trouble with the six,” Davis revealed. The decision to move up her big-strided mount in the line came easy to Davis after she conferred with her coach Markus Beerbaum ahead of her round. 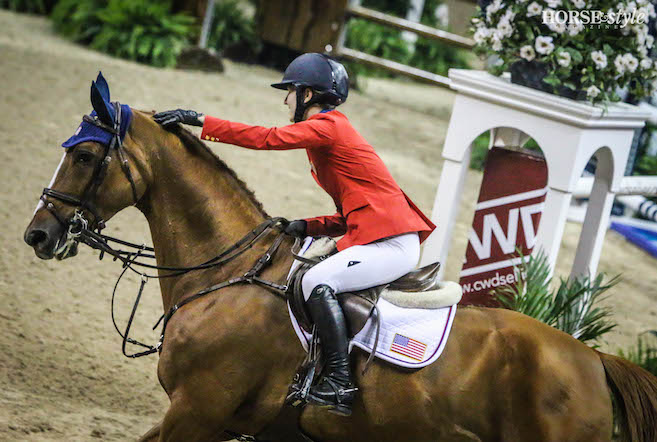 Davis congratulates her horse after a clear first round

But the galloping five didn’t work out as well for every rider that attempted the feat. The arguable favorite for the night (and the winner from the night before), 19-year-old phenom Bertram Allen of Ireland, tried to play to his handy mare’s strengths and ran hard to the triple in five strides, only to have too much steam by the third fence, knocking down a heart wrenching rail.

As much as Allen went into the night as the leading favorite, Rich Fellers’ mount Flexible was undeniably the crowd favorite. The arena went electric with resounding cheers as Fellers and Flexible entered the ring – and the support that followed their clear round rang even louder. If the Irish Sport Horse stallion fed off the energy on the first night of competition as Fellers had said, then Friday night’s support should have made him feel twice as charged. 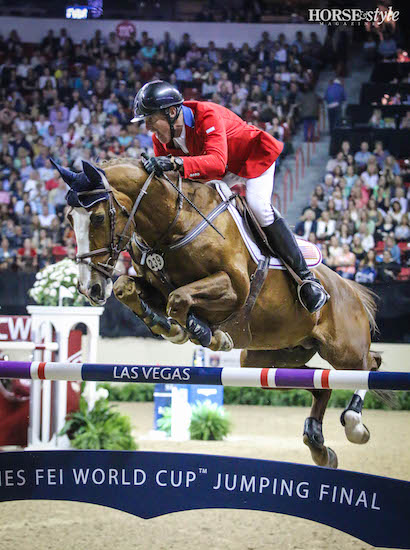 Swiss rider Steve Guerdat and two more Americans, Beezie Madden and McLain Ward, earned their respective ways into the jump off to fulfill D’Ambrosio’s prophesy that six would ultimately vie against each other. Gulliksen rode first and chose a fairly conservative track that left the door open with a rail and a time of 40.06 seconds. Davis was next to try and thrilled the crowd with a tight inside turn through the gap.

Although the aggressive choice shaved nearly 7 seconds from Gulliksen’s time, she snagged a rail over the final oxer. Madden followed a similar, albeit slightly slower route, but kept the rails standing. Ward and his longtime mount Rothschild had uncharacteristic rails and refusals. Guerdat combined the best of Davis’ and Madden’s rounds to have a clear round that beat out the latter’s time.

The last to go was Fellers – but really, to the crowd, it was all about Flexible. The pair galloped to the first fence, calm and collected, only to lightly tap a rail to the ground. The sound of the crowd’s crashing hope resounded through the stadium louder than the soft thud of the pole to the ground. If it weren’t for that rail, Fellers and Flexible would have beat Guerdat and his mare. But in that same fantasy, Davis’ time was fastest of them all.

“My plan was to go for it a bit,” Davis explained. “I was in 16th place so there was no room to be conservative so I tried to go as fast as I could without totally unraveling my horse for Sunday. I’m pleased because we moved up.”

Madden also sounded unfazed by her second place finish. “I try to take [the Final Round] as a separate class and [will] try to jump a couple clear rounds,” she revealed about her World Cup strategy. “It’s a small indoor – anything can happen.” 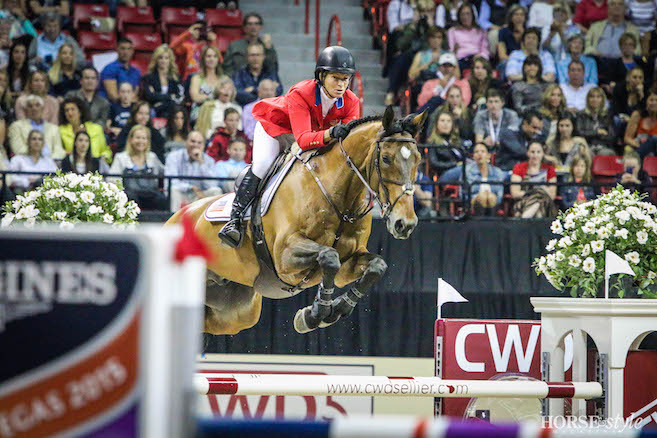 But in a jump off that predominantly featured American riders, the veteran Swiss rider took the hard earned and well deserved win. The 2012 individual Olympic gold medalist acquired the ride on his winning horse just ten months ago. “She’s a very nice mare with a great character,” he described. And with tonight’s performance, Guerdat has tied for first place along with Fellers heading into the Final Round on Sunday. (Points are tallied from the first two rounds to calculate the standings. Once standings are determined, only the number of faults go against a rider in the final round to determine the year’s World Cup Champion.)

A legacy of heartbreak has surrounded the World Cup for Guerdat. In 2012, he had to jump off against Fellers only to lose, and the year before that he jumped off against Madden and lost then, too. He also remembered that last year, he had led the pack into the final before “messing it up, again.” This just may be the year that Guerdat finally takes home the title. But in translation, that would mean heartbreak for the others – especially the crowd that so faithfully rallies behind the USA’s Flexible, who is the oldest equine competitor.

Perhaps the Swiss showed that he knows best when he said, “[Show jumping] shouldn’t just be a sport, but [it should] also be entertainment for the people – [it’s] something that the Americans do so well.” So win or lose, heartbreak or victory, come this Sunday, the final round’s disappointments will surely be just as thrilling as the big success stories. Vegas may be that heartbreak city, but every risk is worth its chances. 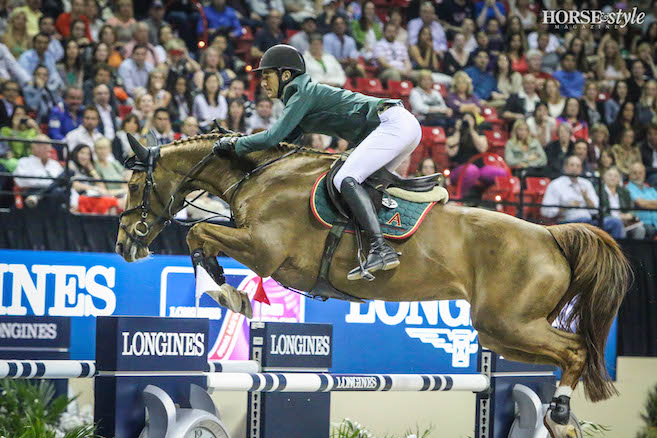 Guerdat turns for home –and victory– in the Round 2 jumpoff 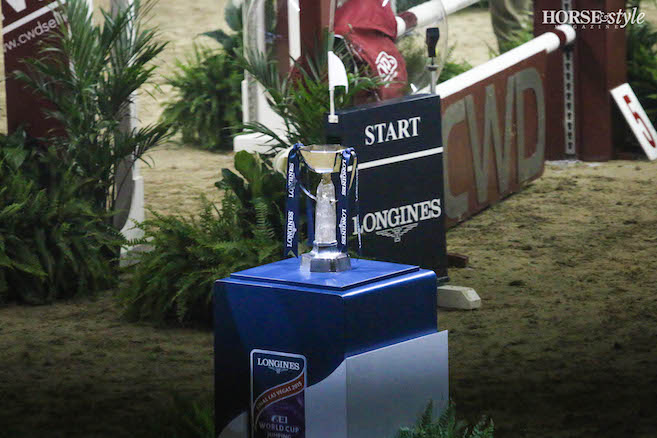