It must have felt so good to finally step onto that middle step of the awards podium. Steve Guerdat has been the long-suffering bridesmaid to more than one other riders’ victory ceremony at the FEI World Cup Finals; in the nine years that he’s been trying for it, he’s come close, but never claimed that silver trophy. But on Sunday afternoon at the Thomas & Mack Center in Las Vegas, the deck finally swung his way.

Guerdat had already had a pretty good week at the World Cup Final. On Friday, he won Round 2. On Saturday, he donned a cowboy hat and rode a Western cutting horse, to the thrill of the crowd. Today, he joked that he felt like a cowboy on his wild ride to the final fence in Round 4 of the World Cup. He looked like one too, arms flailing and crop recklessly flying as he galloped/crashed over and through that obstacle. But with two rails in hand it was enough to earn him the 2015 World Cup Jumping Final championship.

Many things happened this week in Last Vegas, far too many to list. So we’ll leave you with just five –the top five- most memorable moments of the 2015 Longines FEI World Cup Final. 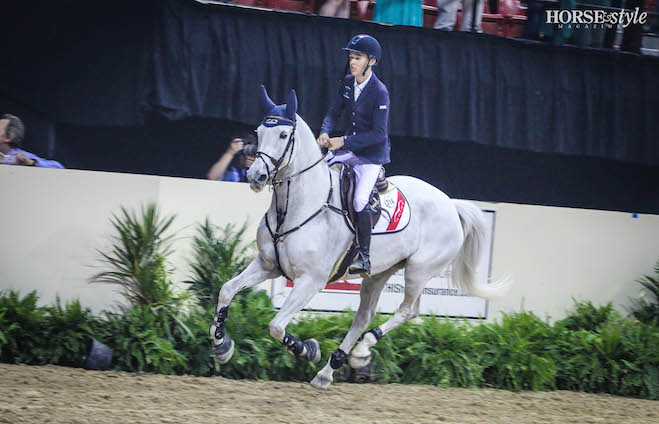 Just saying. On Wednesday, Horse & Style Editor in Chief Erin Gilmore analyzed the field and singled out the five riders we were most excited to see in Las Vegas. Read: most likely to win it all (out of superstition, it is best not to flat out predict the winner.) Of that group, four of the five finished within the top ten, with winner Steve Guerdat, and third placed rider Bertram Allen (pictured above) among that group. Who knows show jumping? The media corps who live on the rail at horse shows around the world know show jumping. Trust us! 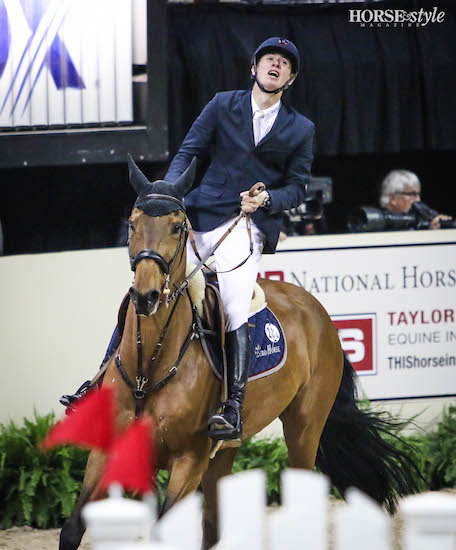 Joy for one meant disappointment, and often the most painful degree of heartbreak, for others. As one of the youngest riders in the field, Jos Verlooy earned the audience’s respect with his stellar, clear ride in Round 3 aboard Domino. This is the same rider who took the Longines Los Angeles Masters by storm last fall, fyi.

But Jos, poor Jos, in Round 4, he rode another fantastic track, that was clear, almost clear, until the final fence. When that rail hit the ground, the pain was written all over his face. Ouch!

Throwing Caution to the Wind Works Out: 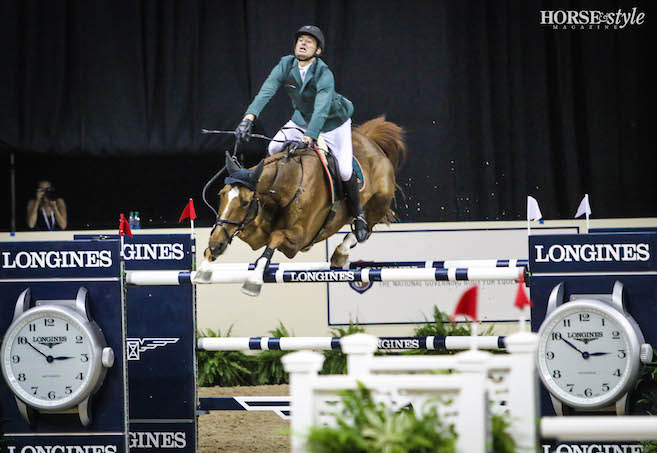 Speaking of rails at the final fence, Steve Guerdat owns the crash title of the week. With time faults on the line and the World Cup trophy within his reach, he forwent actual jumping and galloped flat out to the finish line. With two rails in hand, Steve could afford to have a rail at the last fence and still win the World Cup. Let’s just say that his interpretation of “rail” was interesting. Nevertheless, it worked! 2015 will forever go live in infamy as the year that the winner literally crashed through the last fence to claim the World Cup Final. 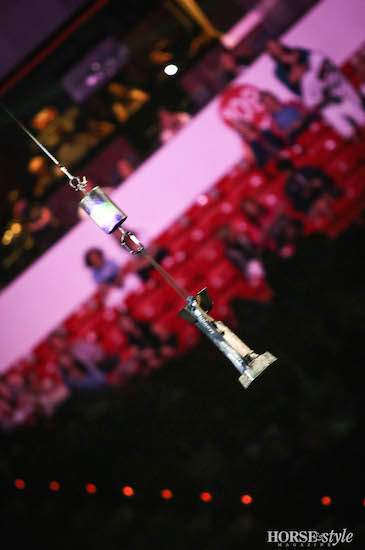 There are things that have happened at this World Cup Final that can decisively be counted on the “only in Vegas” list. The horse show opening with an Elvis impersonator, for example. Or, pre-show fireworks and lasers filling the arena with smoke before the first horse enters the ring (that latter event did NOT put this photographer in a good humor. But I digress). Also making the only in Vegas list, that time the World Cup Trophy floated downward to arrive at that awards ceremony from somewhere high above in the stadium eaves. . . . yes, that happened, and it was quite, errrr….attention-getting! 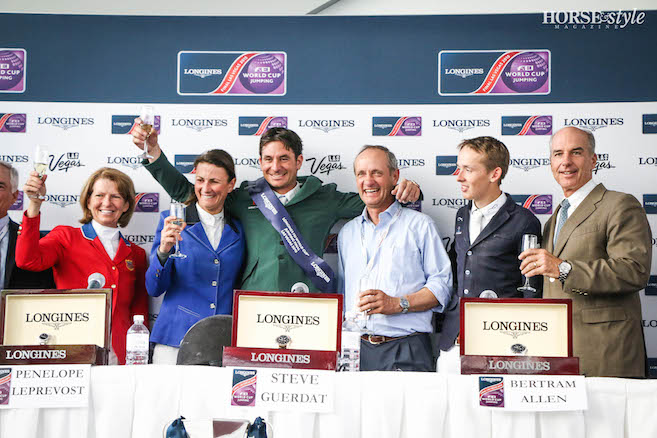 Defacto bottles of water are always set out for the riders at press conferences. Occassionally they’re accompanied by a beer, sometimes, a bottle of champagne. But this was a first – at the end of the press conference, a tray of champagne was presented to the riders in order to toast the day. How nice for everyone except Bertram Allen, who was given – well, not champagne. He may be number 10 in the world, but in the USA, he’s not yet old enough to drink. He looked on with a slightly bemused face while the others downed their drinks. Not to worry Bertram, they’ll shower you with champagne at home in Ireland. Cheers!