Los Angeles, California – March 16, 2016 – The College Preparatory Invitational (CPI) enjoyed a stellar debut at the Los Angeles Equestrian Center ‘Equidome’ during its inaugural California event. The CPI held its first horse show in 2010 and since then has developed into a highly anticipated event that attracts college bound riders from grades 9–12 who apply for the opportunity to participate. This year was the first time that CPI added a second event with more than 80 young riders traveling to California from states like Illinois, Arizona, Colorado and even Alaska and Hawaii to attend educational seminars, meet with college equestrian coaches and compete in a collegiate format horse show.

The judge for the event was Maryne Langer who asked riders to show their horses and then to dismount and approach her to receive a horsemanship question that helped determine their score. She remained available at the close of each competition day to speak to students about their rides. Often citing her judge’s card, she explained their numerical scores and provided tips for improving them. United States Military Academy at West Point equestrian team coach, Peter Cashman, served as both show manager and course designer. His tracks placed an emphasis on equitation; with courses that asked the riders to consider trot fences and halts, as well as bending lines and long approaches to single fences.

During the event the CPI Scholarship and Educational Fund awarded scholarships to the following student riders:

An impressive roster of educational speakers rounded out the weekend with informative discussions about navigating the college selection and admissions processes; what to look for and expect in a college equestrian experience; and even what to expect after college in obtaining a position in the equestrian industry. Intercollegiate Horse Show Association vice president Peter Cashman offered an introduction to the IHSA and spoke to the students about strategies for showing well at the CPI competition.

“The CPI team worked tirelessly to ensure that our first ever event on the West Coast went beautifully and I’m so pleased to say that we achieved that goal,” said Lindsay Martin, CPI president. “CPI California attracted a great pool of riders and this weekend we were able to facilitate their introductions to coaches and admissions people from top colleges in the country – that is really powerful and it is what CPI is all about.” 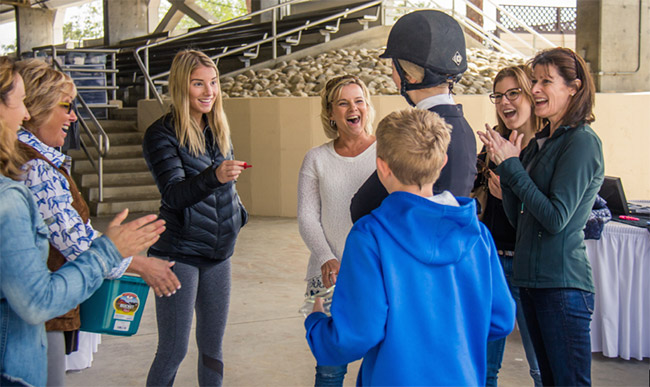