My memories of the very first Kentucky Three Day Event World Championships in 1978, are some of the most exciting in my large store of memories, and that excitement endures as a magical aura that surrounds the Rolex to this day. I was fortunate to be a friend of the amazing man, Dr. Jim Holloway, who simultaneously brought the Kentucky Horse Park into being, and brought the world to Lexington forty-eight years ago for the event. Stories of the years of preparation and the event itself wash over me as I write this, and I’m happy to have them stored away to pull out and enjoy.

Just three years after that beginning, Rolex stepped in as the title sponsor, and has remained so ever since. Their loyal support is unparalleled, with a relationship that has lasted more than three decades. To all who reference the event in casual conversation, it is referred to simply as ‘the Rolex.’ 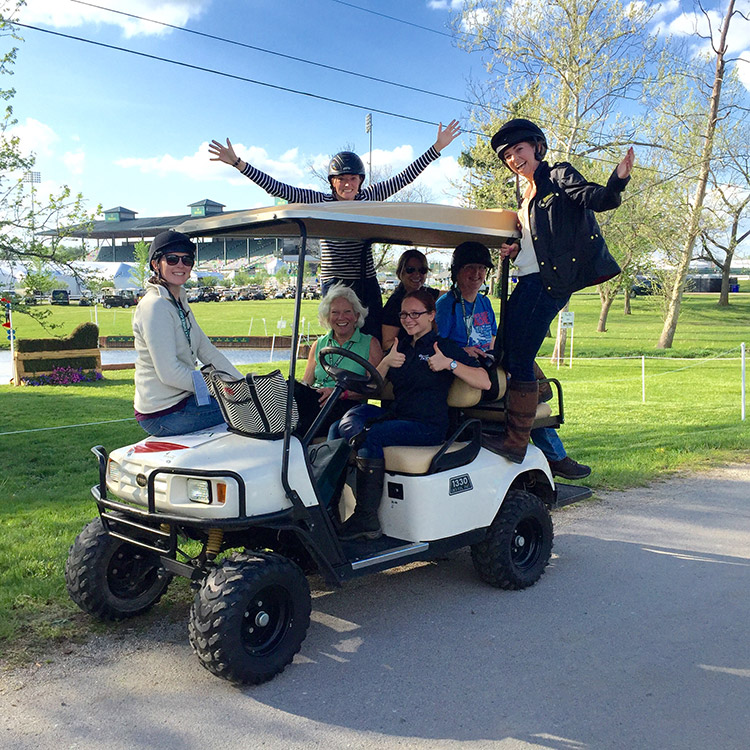 Media golf cart after the ride!

As a journalist covering ‘the best weekend all year,’ I was given an opportunity to participate in the journalists’ ride on the evening of April 28th following the horse inspection, and I accepted enthusiastically. We were assigned a horse to ride – one of the trail horses that carry visitors every day on Horse Park tours, and we were led by Pan American champion and former Rolex competitor Will Faudree, who gave us a commentary on riding the course.

In case you’ve never stood beside these jumps, either afoot or horseback, they are impressive to say the least. Huge and technical, very few of the lines in the combinations are straight; instead they require curves or turns, with careful study to determine the track to take. For a lifelong foxhunter who has jumped a lot of jumps by pointing my talented, athletic thoroughbred at the jump and letting him take over, it was mesmerizing to listen to Will talk about the small but important intricacies that a world-class eventer must consider, and the subtle signals that are used to convey small but important messages to the horse – messages he/she understands and responds to. And in turn, it is vital that the rider remain sensitive to the signals the horse is sending. 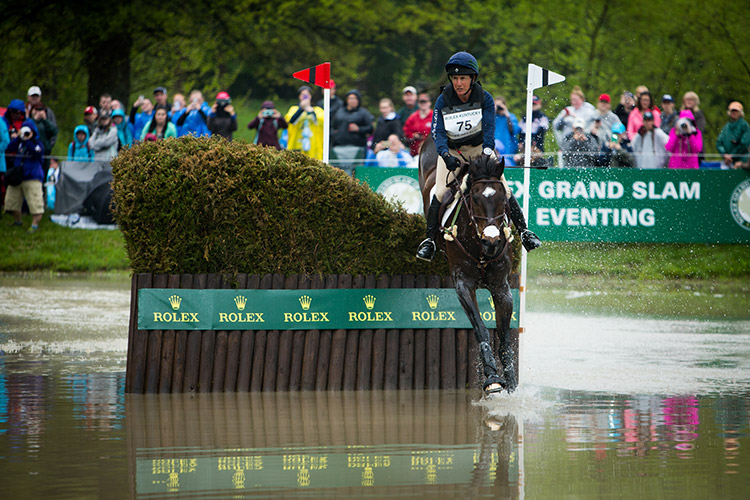 Relaxed and informative, Will spoke of considerations of time (how many minutes into the ride, therefore how much of the horse’s energy has been used, and how far still to go – there’s only so much energy), technical considerations as to how many strides and exactly what angle to take on the approach, what signals to give and when. And signals can be as subtle as a small extra push into the jump so that the horse can land with as much confidence as he had on takeoff; a lengthening or shortening of stride according to how far into the course, and therefore how tired the horse is; a slight push up a hill or berm; accommodating to the challenge of a tight turn. I learned a renewed appreciation for the talent and expertise of a world-class rider.

Will says that he walks the course four or five times in anticipation of Cross-Country day, counting strides to the jumps, and planning the track for his horse, who will not have seen the course. Weather can be an added challenge; the rider must anticipate, for example, on a rainy day, what effect that will have on the course and the takeoffs, and must take into consideration his/her place in the order of go, and anticipate how damaged the course will be at that time. A slippery takeoff requires that the rider place the horse with pinpoint accuracy. 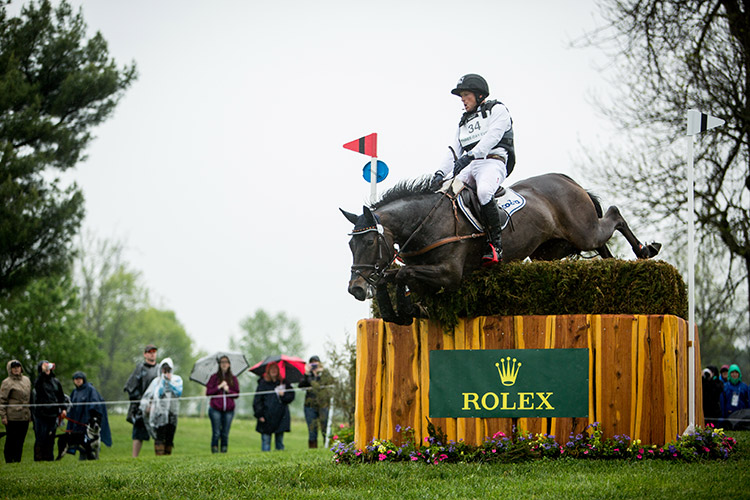 Our ride began at the Head of the Lake, redesigned for 2016, but famously technical and difficult every year; and always the most popular place for spectators to stake out their territory for the day.  After a long gallop, there is a rolled table (#10), nearly 4 feet high and 8 feet wide, that initiates the approach to the five-feature Head of the Lake complex (#11 and #12), ending with a bounce out of the water quickly followed by a narrow offset brush jump, requiring a deft change of angle.  Will noted that these jumps are about four minutes into the (11 minute, 15 seconds optimum time) course.  So while the horse is not yet tired, consideration must be given to conserving energy for the finish.

Will spoke of making an effort at this point in the course, not to interfere too much, but to monitor strides and guide when necessary.  He told us that the angle on the approach, combined with the large crowds pushing the limits of the ropes, make it impossible to see the first jump until about four strides out (remember that the horse has never seen the jump), so the rider has to be sure of where he/she is going, and positive about the number of strides, while conveying quiet confidence on the approach. 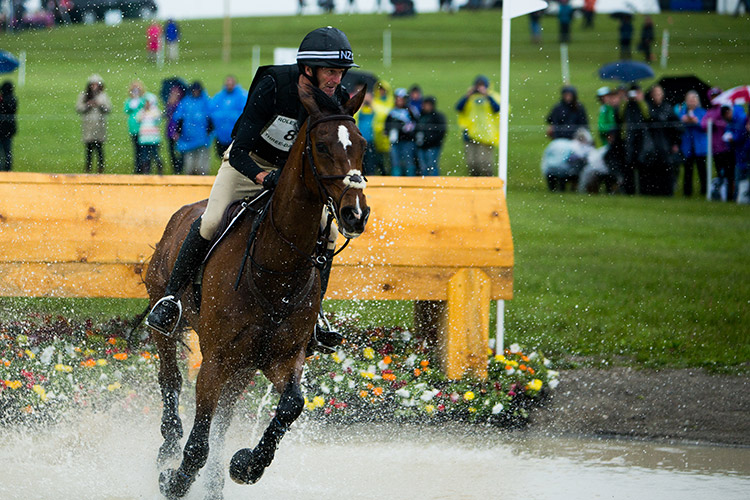 Toward the end of the four-mile course (there are 29 jumps or combinations), there is a subtle change in strategy, as now the rider is dealing with a tired horse. Early in the course, Will told us, the rider tries to ask as little as possible of the horse – to just let the him/her enjoy the ride, and give very few instructions (with reins, legs, or seat); to save the instructions until a weary horse really needs them.

Derek di Grazia designed the 2016 course, as he has since 2011, and to my eye it was beautifully done, with huge attention to spectator-pleasing detail. But in contrast to years past, in this Olympic year, he ramped up the difficulty by putting a preponderance of challenging technical fences at the end of the course instead of at the beginning. Even so, according to Will, none of the fences were too difficult for those who have qualified for this four-star event. 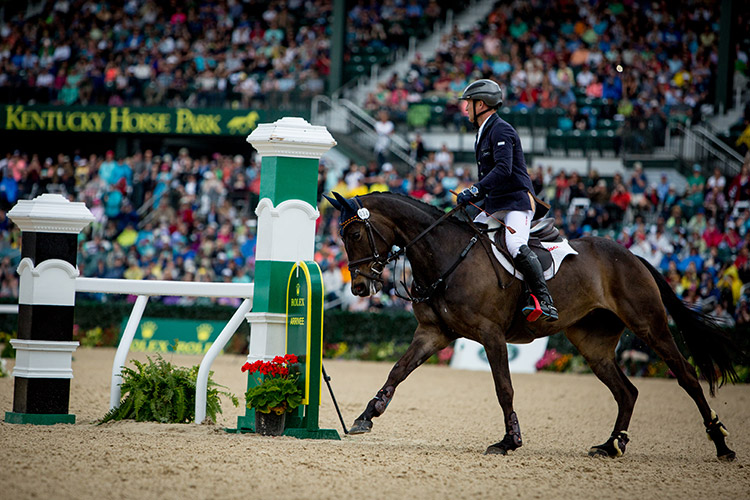 A Difficult Challenge on a Wet Day

Cross-Country day dawned cloudy but dry, so the first few riders in the order of go were ahead of the rain, which moved in at about 10:30am, and remained with us the rest of the day, steady, but with heavy bursts.

At the end of the day, the rain had taken its toll on the course, but all riders and horses passed through the finish flags without injury. Michael Jung on Fischerrocana FST had maintained his lead, and Phillip Dutton was 2nd on Fernhill Fugitive, and 3rd on Mighty Nice.

Going into Sunday’s Stadium Jumping, Michael Jung has the most on the line.  Having won at Burghley in September, a win at Rolex Kentucky would give him his second victory in the three-leg Rolex Grand Slam, as he heads into the third leg at Badminton next weekend. 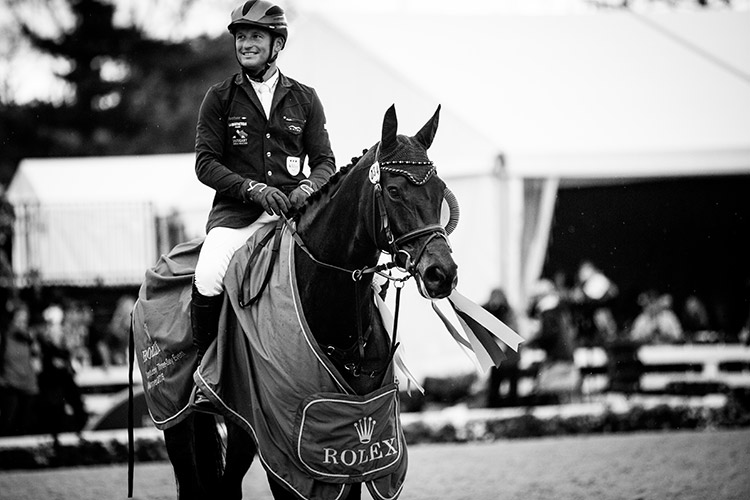 The Stadium Jumping phase began in bright sunlight, as the riders and horses prepared to answer the fair but difficult, technical questions asked of them by the Richard Jeffery course design. Different from a Show Jumping competition, here the objective is to prove that on the day after jumping solid obstacles at speed, the horses can come back and maintain the obedience and focus required to jump, at a controlled pace, a set of formidable obstacles that will fall down. Many showed small signs of fatigue, whether it be loss of focus, or a lapse in ‘listening’ to the rider, or just the edges of exhaustion.

On this day, the lineup goes according to standings after cross-country.  The Ground Jury passed 54 horses in the final inspection on Sunday morning, and they would enter the ring in order from last place to first.  The last half of the riders competed in the rain, but fortunately, the footing in the Rolex Arena is so good that it is unaffected by bad weather, and all horses and riders finished safely, though very few were clean with no time faults.

At the end of the day, Germany’s Michael Jung and his mare Fischerroacana FST were the winners, making Jung only the third rider ever to win back-to-back Rolex Kentucky Three-Day Events. The next four placings were Americans: Lauren Kieffer and Veronica 2nd, Maya Black and Doesn’t Play Fair 3rd, and Phillip Dutton 4th and 5th on Mighty Nice and Fernhill Cubalawn.

Now the Eventing world will be watching as we follow Michael Jung, with his great smile, easy manner, and amazing mare, to Badminton to compete in the third leg of the Rolex Grand Slam. We wish them well.