Pony Corner: What’s in a Name?

Four-year-old Sofia Lorelei Marbut doesn’t know it yet, but she set in motion a series of events that has happily engulfed her entire family. Her mom Erin was diagnosed early in the pregnancy with hyperemesis (think Kate Middleton, Duchess of Cambridge). In Erin’s case, it lasted the whole nine months, forcing her to move to husband Whit’s parent’s house to convalesce. During that long ‘down’ period, she had plenty of time for quiet reflection and to plan for the future. One thing she and Whit decided was that their daughter would have the best pony. And they would find it.

Can’t Have Just One…

Once Sofia was born, the search began for the perfect pony. “I fell in love with so many, and wanted to buy them all!” Erin remarked. “Having a breeding farm had been a lifelong dream, so I narrowed the list to a small group to get the farm started.”

A ‘horse-girl’ from the beginning, Erin rode with a hunter trainer through childhood, high school, and college, and then made a switch to breeding. She always loved to study bloodlines, and growing up in the days of VHS tapes, she knew that breeding farms had tapes of breeding stock and sale horses, and she would order a tape and watch it over and over, enthralled. During the search for Sofia’s pony, Erin visited countless pony farms, learning along the way.

“We bought five acres and named it Lorelei Farm – Sofia’s middle name.” The farm was thriving, and outgrowing the five acres (in Canton, GA, near Atlanta), when Sofia’s dad took a job offer in Memphis, TN. So they bought 111 acres, and began building their home and reshaping the property for Lorelei Farm. Living nearby, Whit’s mother rides dressage and both of his parents are partners in Lorelei Farm. Although there’s still construction, the ponies and the family are settled in with plenty of space. 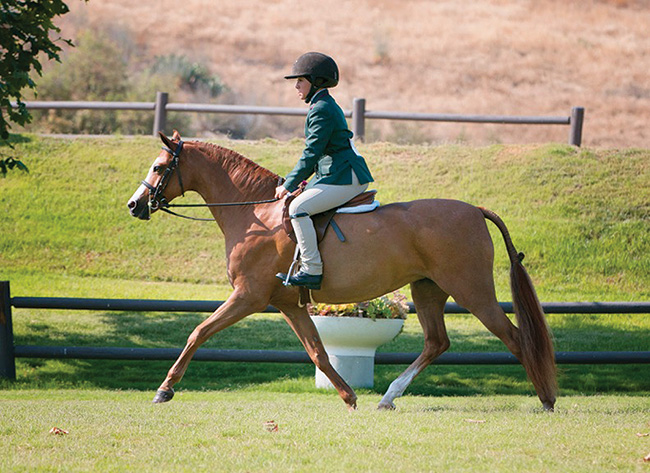 Erin’s breed favorite has always been the purebred Welsh pony with its distinctive eye and muzzle, legendary even temperament and beautiful gait. But finding the perfect pony? That’s a tall order, so to speak. Then, Erin found Miss Money Penny in the United Kingdom in the fall of 2013, and was dazzled. She left her in her U.K. home for a year before importing her in 2014 at age seven. “I had never seen one move like this one.” Erin points out, “She’s a freak of nature mover, like she’s floating on clouds; and so quiet. I’ve had lots of ponies, but she’s something spectacular.”

Knowing the pony’s quality, Erin asked trainer Carri Tootle of Milton, GA to put her back into work after years of being a broodmare. Still bearing the name Miss Money Penny, she won at her first show with Carri’s daughter Anna in the irons.

In early 2016, an opportunity to send the pony to Makoto Farms in Southern California, and trainer Liz Reilly, presented itself. Liz had been highly recommended to Erin, as had her daughter Augusta, a skilled rider chalking up a lot of successes in the pony ring. Coincidentally, Makoto is another farm bearing a family middle name; it’s the middle name of Liz’s husband and partner, Chris Iwasaki. 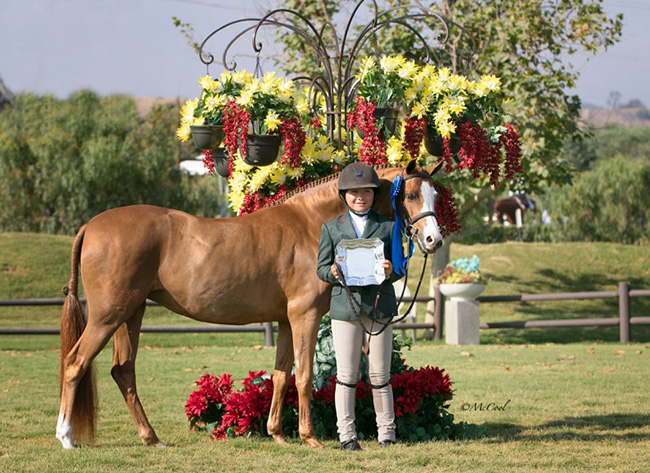 So Miss Money Penny became Small Illustration and went off to SoCal to become a star in April 2016. Just as Erin had, the Makoto team fell in love with her. One team member sent Erin a video of her four-and-a-half year old daughter hacking Small Illustration in the warm-up ring at the show. Molly, as she’s called around the barn, became an instant favorite.

Augusta began showing her at the beginning of the Blenheim 2016 June Classic Series, and in Week III, she piloted the exquisite chestnut medium pony to the Zone 10 Pony Challenge Green Pony Grand Championship. Though this pony is qualified for the 2016 Pony Finals, Erin made the decision that, if she’s not leased or sold, she will give her some more miles and then point her toward 2017, as her green status can be reinstated.

At about the same time that she discovered Small Illustration, Erin noticed that her full sibling, a stallion, was also for sale. Though there were no plans for Lorelei Farm to stand a stallion, she watched his video, and found herself contacting the owner. The gorgeous pony was raised by a lady in Wales, who ironically is also named Sophie. Now a Lorelei stallion, he arrived in the U.S. in 2016. In 2017 his first foal crop will make its appearance, and little Sofia Lorelei Marbut will have some beautiful ponies bearing her name as a prefix.

Named Monte Carlo, the new stallion is a stunning dapple gray. Because Juniors are not allowed to ride stallions in the show ring, his reputation will initially be riding on his sister Molly’s coattails. From all appearances, she has some eye-catching coattails!