It could be said that attending the Saut Hermès horse show in Paris is a once in a lifetime opportunity. The historic Grand Palais venue, the five-star riders, and the Hermès culture seamlessly weave together to make it an unforgettable experience. I am fortunate that my trip this March marked my second time at the Saut Hermès, making it a twice in a lifetime opportunity for me. The Saut Hermès is such an incredible horse show that once is definitely not enough!

One of the most iconic horse shows in the world, the Saut Hermès never disappoints with respect to its venue. The 120-year-old Grand Palais, located right on the Champs-Élysées (an avenue in downtown Paris famous for its theaters, cafés, and luxury shops), has been the home to the Saut Hermès since its first show in 2010. Although the Saut Hermès is the only horse show to be held in the Grand Palais during this century, from 1901 to 1957 the historic exhibition hall hosted many spectacular horse shows that served as both sporting events and social gatherings. It is almost poetic that Hermès, a brand with over a century of stylish equestrian history, would be credited for bringing horses back to the Grand Palais. 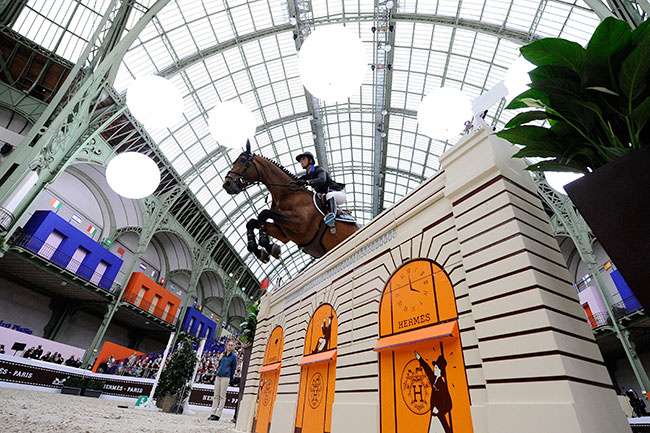 Pénélope Leprevost soars over the Hermès wall in the Grand Palais; Photo courtesy of Saut Hermès

To know Hermès is to know that equestrian flair and horses are at its roots. Hermès was established in France in 1837 by Thierry Hermès as a local leather harness and bridle shop. Thanks to Hermès’ dedication to expert craftsmanship and innovation, (Hermès was the first to introduce zippers in France!) the company was able to broaden its product line over the nineteenth century and expand their market throughout Europe and overseas. Today, Hermès continues to be influential and successful in both equestrian and high fashion markets.

I was fortunate enough to visit the Emile Hermès Museum, which houses Hermès’ collection of equestrian antiques and original Hermès products. To this day, Hermès designers will visit the museum for inspiration. Stephane Laverrière of Hermès best explains why the museum is so inspiring. “The collection is the spirit of Hermès and the soul of the company. The story of the company is within this collection.” Touring the museum, it is easy to see that Hermès’ best future lies in maintaining the excellence of its past. As a true Hermès devotee, being able to experience the story of Hermès through the Emile Hermès Museum’s artifacts, was an honor. 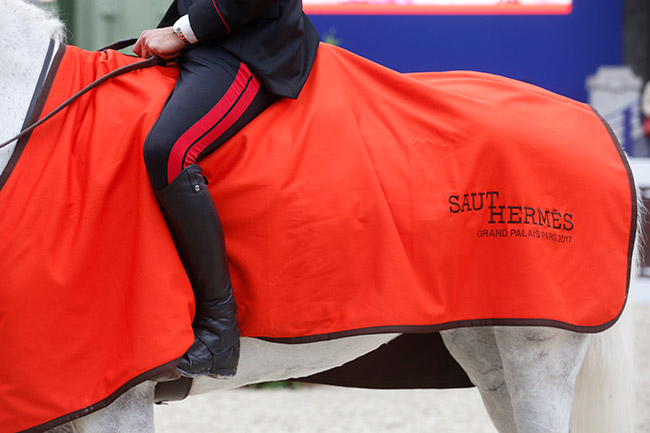 True to the foundation of the company, the Hermès name is synonymous with craftsmanship. Each stitch that is sewn into a garment, handbag, or bridle is thoughtfully and scrupulously executed. The saddles Hermès designs are no exception to this rule. Hermès saddles can be custom designed to fit both rider and horse, and are meticulously adjusted to function well during movement, as the horse works under the rider. Master saddle maker Laurent Goblet describes his philosophy: “I’m not a saddler for museum pieces! My job is to produce saddles that adapt to the rider’s needs, with materials [and] technologies that best meet their expectations.” Certainly, both riders and horses can appreciate Hermès’ attention to detail.

Being an Hermès partner rider is an incredible honor and speaks highly of that rider’s talent and level of horsemanship. Belgium’s Jérôme Guery, top international five-star rider and Hermès partner rider, describes why he enjoys being connected to Hermès: “The image of Hermès is really nice. Hermès is quality. When you think of Hermès, you think of quality.” Hermès supports its partnered riders by providing products for both horse and rider. When Guery explained that he has a horse with a very sensitive back, the Hermès saddle team worked diligently to craft the perfect fit. The partnership between Hermès and its riders works both ways. Partner riders also become technical advisors to the Hermès team which helps to ensure that Hermès continues to develop and bring to market only the very best in equestrian products. 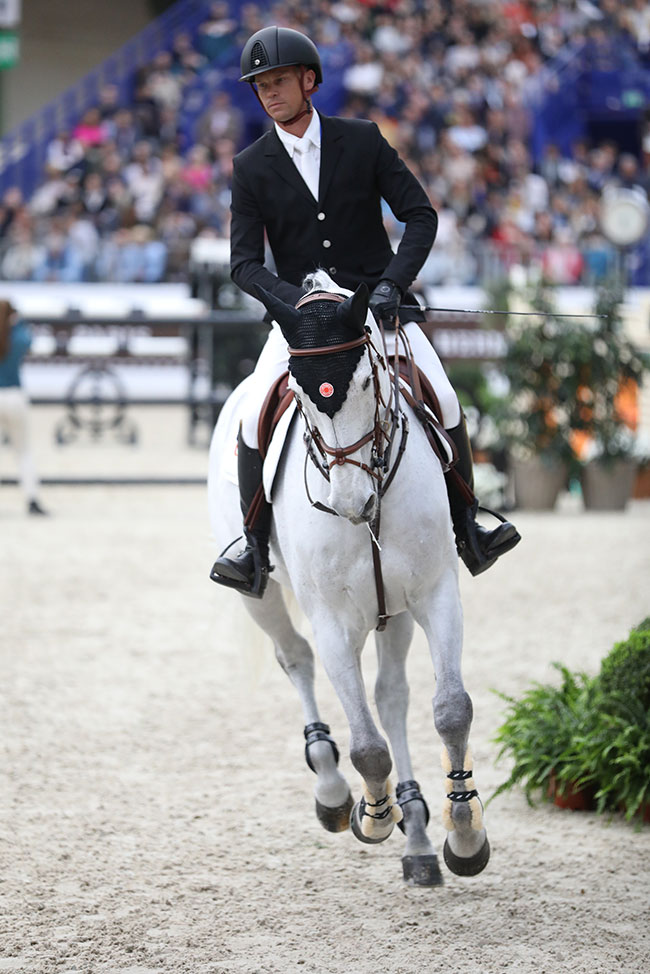 Hermès’ partner rider, twenty-year-old Laetitia du Couëdic, placed second in one of Saut Hermès’ unique classes, the Les Talents Hermès CSIU25-A class. This special class is restricted to twenty riders, from ten different countries, all under twenty-five years of age, and limited to one horse per rider. After the class, du Couëdic spoke about her success in the class and also about how honored she feels to represent a brand as prestigious and well known as Hermès. She also noted that wearing the Hermès brand inspires her to work hard everyday and to continue to strive for greatness.

Under the Grand Palais’ Lights

This year, for the first time in Saut Hermès history, there was a night class. This exciting evening delighted fans and challenged riders with a class against the clock, with no jump-off, with progressive difficulty, and a joker. In a class of thirty-five starts, the French crowd was thrilled when their own Julien Epaillard finished first with a quick time of 42.82. France’s Kevin Staut finished second with a time of 43.28, only a fraction of a second behind Epaillard. The energy at the venue was electric and the applause and cheers in the Grand Palais were tremendous!

The evening also included a spectacular performance showcasing lyrical extracts from Don Quixote’s Dream. This show was a previously unseen performance conceived by rider and stuntman Mario Luraschi, and actor Florient Azoulay. It transformed the arena into a Broadway-worthy set and included a falcon, a donkey, trick riding, and dressage. Between the international competition and the Don Quixote performance, it was a simply unbelievable evening under the Grand Palais’ lights. 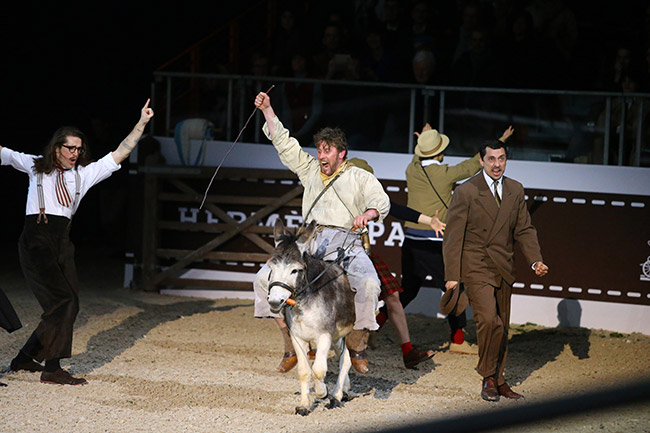 Women on the Podium

Sunday’s events finished with a truly nail biting Grand Prix Hermès CSI5*. Only three riders out of the forty-seven starts finished with clean rounds. The crowd that filled the Grand Palais crowd was on pins and needles every time a horse entered the ring. Bertram Allen went eleventh and was the first in the class to have zero faults, proving to both the crowd and the other riders that it was possible to jump this course clean. However, it took thirty more rounds before French favorite Pénélope Leprevost became the second rider to go clean. In an exciting finale, the last rider of the class, Edwina Tops-Alexander, was not only the third and last to go clean, but with a time .08 of a second faster than Leprevost, proved to be the overall winner of the Grand Prix Hermès CSI5*.

It was a tough track, and as a female rider myself, it was lovely to see women riders end up first and second on the podium. Shortly after Tops-Alexander’s win, she announced to the public that she will be taking a leave of absence from the show ring because she and her husband, Jan Tops, are expecting their first child together. This win could not have come at a better time for Tops-Alexander and her special mare, California. It was also a great reminder to me, to the moms, and to the women riders in our community – we can do it all.

The Saut Hermès is not your average horse show; it’s a complete experience. It is an incredible weekend that beautifully displays the shared qualities between Hermès and the sport of international show jumping: exceptional execution on an international stage, attention to detail, and brave, bold decisions that lead to extraordinary success. Having the chance to visit the Saut Hermès for a second time, and to spend the weekend with the world’s top riders and horses in the iconic Grand Palais, definitely left me feeling charmed by the experience.

This story was the Cover Story in our May/June 2017 issue. Read the full issue online here.