In this fast-paced modern world, there still exists a wild, rugged and untamed southern land. Described as, “A limitless place, a trail not yet taken. A land filled with inspiring tales and unaltered truths, and one of the last untouched places on earth,” this land is Patagonia. And this is a place to be explored. 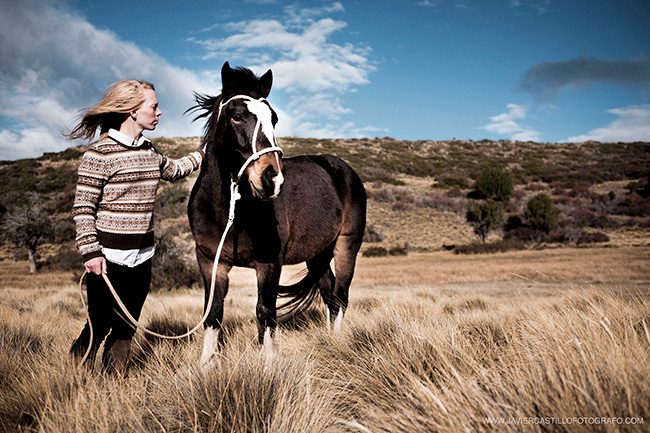 But the slow travel days of yesteryear have nearly been forgotten, as we journey from one side of this earth to the next at unnatural speeds. So how does one reconnect with the land, our culture, and our ancestors? Simple. By way of the horse.

Horse & Style community, it is time to become acquainted with the nomadic, adventuring, storytelling horsewoman, Stevie Anna Plummer. The freelancing free-spirit that is readying herself to embark upon a 1,000 mile exploration of Patagonia, with just herself, her trusty canine companion Darcie, and her two Criollo Argentinian horses. Two feet, four paws, eight hooves, and 1000 miles. Yes, a solo journey across the wild lands of Patagonia. Prepare yourself to be inspired. 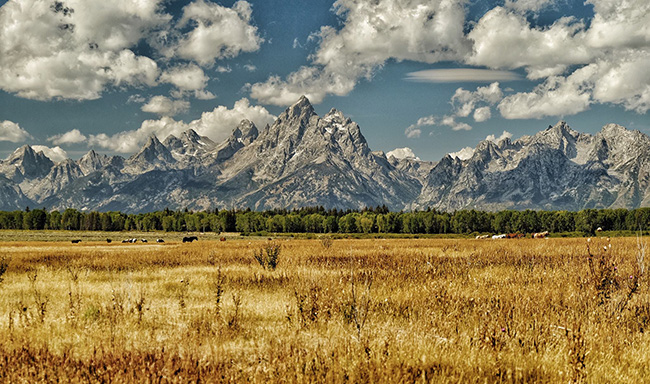 Horse & Style: Before we dive into Patagone and your current adventures, let’s start at the beginning. How did your passion for horses, travel and adventure come to be?

Stevie Anna: I was raised in the woods of Oregon and the plains of West Texas to a religious family. For me, horses became an obsession from the moment I knew what a horse was. I started lessons when I was four years old, but my family was never able to afford a horse. So I was forced to ride other peoples’ horses, which offered me so much opportunity to learn, and ultimately made me a good rider. In Texas, we participated in rodeos and playdays. I loved this, not so much for the competition, but for the fun. It was an opportunity to get out and ride. But as I grew up, I transitioned out of the adrenaline and into the back country, where there was an element of peace, enjoyment and serenity. When I graduated high school, I moved to Alaska and began giving pony club lessons and trail rides. I found myself traveling to the lower forty-eight and doing the same thing. I was always a camper as well. Combining the two, horses and nature, was complete harmony. It was where I really wanted to spend my time. 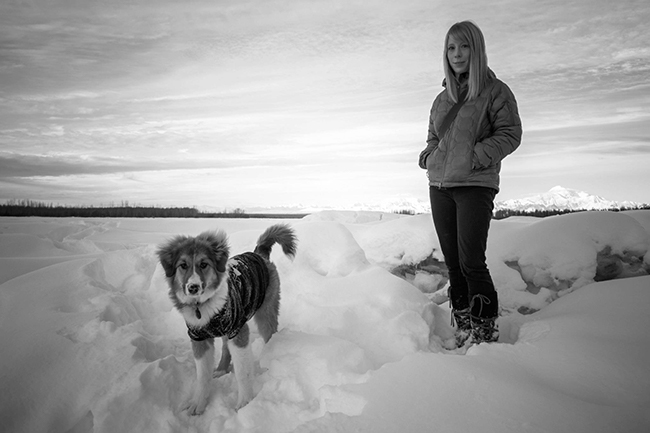 Stevie Anna and Darcie in Alaska

H&S: Traveling and exploring Alaska and the lower forty-eight is a feat in itself. How did you make your way down to Argentina?

SA: I started in Alaska after moving away from Texas. But the dark winters, rainy summers, and tourism…it all started to weigh heavily on me. And there are not a lot of horses in Alaska. They truly need to winter well, so it is a tough place to have horses. I ended up traveling to Patagonia a couple years ago on a scouting trip. I discovered that Patagonia is essentially the Alaska of the south, and thought this would be a really cool place to end up. Plus it has this amazing horse culture. I fell in love with the land, moved down three months later, and haven’t looked back.

H&S: That’s a leap of faith, moving to another country by yourself. We are assuming that you met some people in Patagonia that truly inspired you.

SA: Yes. About six months after I moved to Bariloche, Argentina, I came to know Patagonian gaucha legend, Carol Jones, through the local horse community. We became good friends, and began working together guiding pack trips on her ranch. Jones is considered the ‘granddaughter of Patagonia,’ as it was her grandfather, Jarred Jones, who originally settled here from Texas and helped establish the city of Bariloche. She has been hugely influential on my desire to travel with horses and to live the gaucho lifestyle. She has taught me so much. I’ve been riding since I was a child, but it was Jones, all these years later, who taught me how to care for my animals when in the wilderness, how to pack, how to keep them healthy, and how to search for food and water. She is a tremendous inspiration. 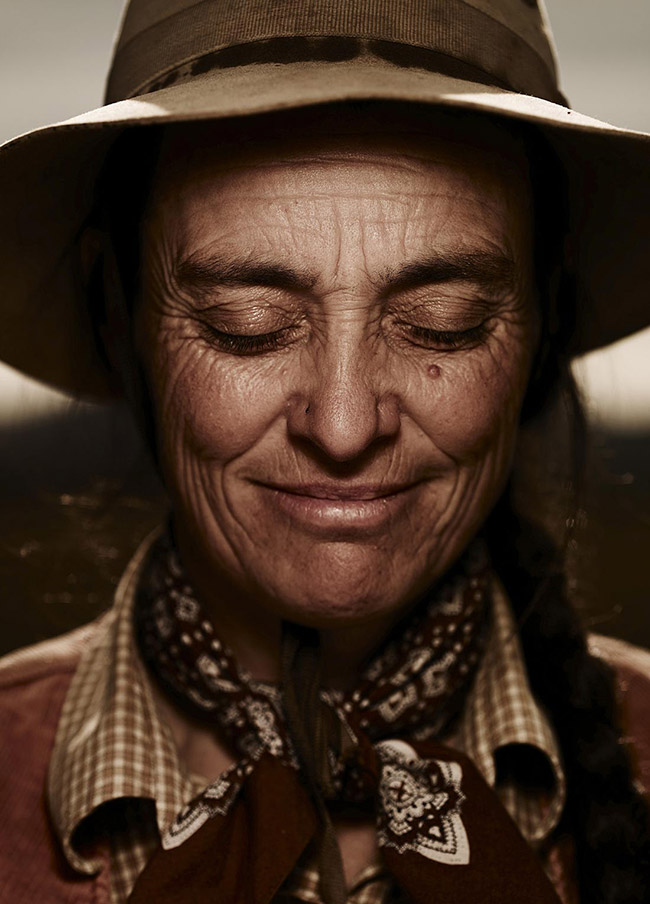 H&S: We hear the term Gaucho, but Gaucha not so much. Are horsewomen common in Patagonia?

SA: No. Not at all. Jones really paved the way for female riders. For a long period of time, she was the only woman in the area to ride a horse. Riding was always a man’s activity. When she was young, in her early twenties probably, she took her first trip to the states to work as a guide. It was in the states that she realized how many women actually do ride. So she returned to Patagonia, told her father what she saw, and convinced him to give her five horses to start her pack string. Thirty years later, here she is, guiding excursions across her estancia (ranch) that last anywhere from half-day to twelve-day long treks. Today, I work with Jones guiding these packing trips on the Estancia Nahuel Huapi. 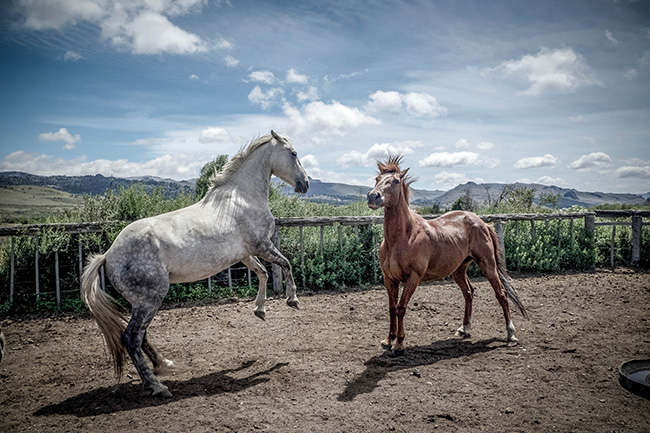 H&S: You will be embarking on your 1,000 mile trek in spring, which is early November in the southern hemisphere. And you are bringing your two horses and your dog. Tell us about your special animals.

SA: At the beginning of this year, I completed my family and welcomed my final horse to the team. So now I have two Criollos, Argentina’s national horse breed, which are essentially the “mustang” of the south. They’re super tough and have solid temperaments. Both in endurance and stamina, the Criollo breed is unmatched. Sundance (the buckskin colored or ‘gateado’ as they call it in Argentina) is a fifteen-year-old Criollo mix. He’s very much a gentleman and often paves the way on our routes. Bandido (the black horse or ‘oscuro’) is a ten-year-old Criollo from a ranch near El Bolson, Patagonia. He is definitely a stop and smell the flowers kind of man. He is rock solid; semi-trucks, Darcie’s bodacious barks and even busy roads don’t faze him one bit. However, our challenges arise when it comes to picking up the pace or leaving his buddies back at the ranch. 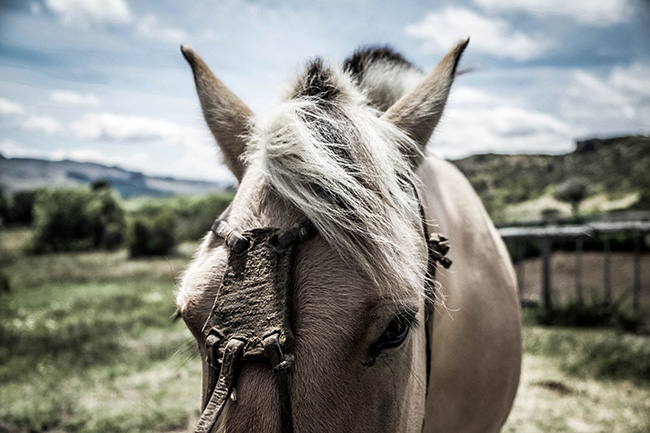 H&S: We all know a horse that can relate to those challenges! And Darcie, tell us about Darcie.

SA: Darcie is a four-year-old English Shepherd that I got as a puppy while living in Alaska. We have spent our time together exploring from Alaska to Patagonia, and just about everything in-between. So far we have traveled twenty-six states, three countries and counting! This dog lives for the road, the trail, the fresh new scents of all the rugged landscapes our world has to offer. And, of course, she has her own hashtag: #TravelsWithDarcie

H&S: How do you prepare for a solo journey of this magnitude across the rugged terrain of Patagonia?

SA: Both of my horses are pretty prepared, as they are used to working ranches, hauling gear, being in the mountains, and so on. They are so incredibly solid. So now it is a matter of keeping them fat and healthy through the winter, so they are in good condition when we prepare to leave come spring. Darcie is already in great shape thanks to our daily ranch work and hikes. I work with the horses on crossing fences, being tied up overnight, hobbled, essentially numbing them to the elements. We’ve been going out on test rides and we feel ready. Now we just need to fundraise and pack. 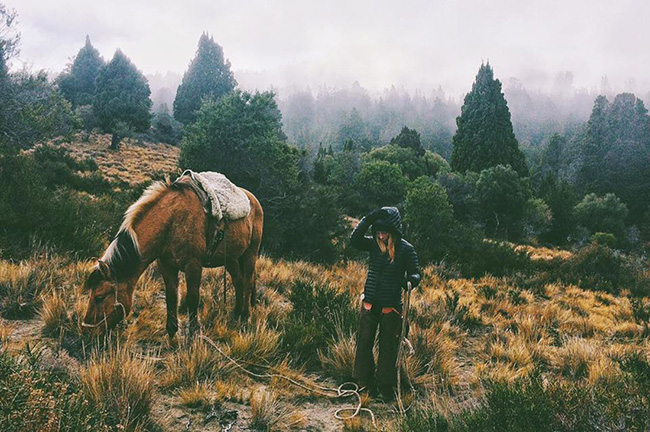 H&S: How can fans, fellow adventure enthusiasts and the horse community help you in this endeavor?

SA: I am currently raising funds which go straight to the necessities to keeping the Patagone team on the trail throughout the estimated four month journey: food for the animals, safety supplies, vet visits, and more. One of the costs I need to cover is horse transportation back from the southern tip of Patagonia to Bariloche, which is over 1,000 miles away. People planning a similar trip often buy a horse, use it for the trek through Patagonia, and then sell it at the end because it is costly to haul the horse back home. But I live here, and I’ve made these animals a part of my family. To finish a trip with them and then have to sell my horses would break my heart. I have set up a Go Fund Me page that breaks down the costs and supplies needed. Here, fans can give to the pilgrimage, and really, every little bit counts. Even if fans don’t have the funds to contribute, simply sharing the campaign and the story goes a long way. You can support the adventure at gofundme.com/patagone.

H&S: And how can we keep up with you during your excursion?

SA: My background and career is in expedition support, media and communications. So I like to think of myself, heading into this trek, as being very prepared to share the adventure. I will be packing, along with all my necessities, the tools I need to stay connected with the outside world (solar panels for my camera, battery pack, filming equipment, computer, etc.). I will be sharing updates and pictures through my blog, Instagram, Facebook, and more. My plan is to be as connected as possible, which means going out of our way to find connectivity, which sometimes will be miles from our original route. It is important to me, and my overall goal, to be able to share this trip with the world and inspire people along the way. 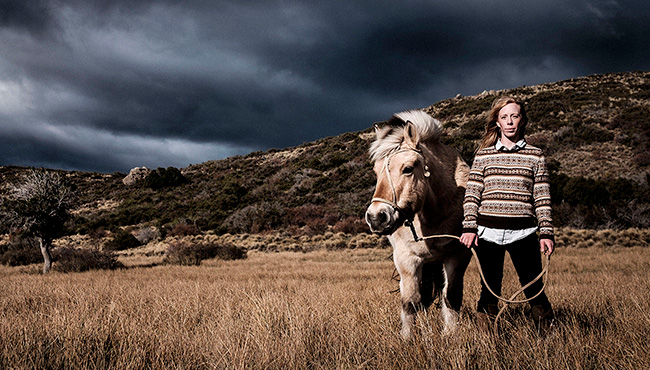 H&S: What are your goals with Patagone?

SA: My mission is to discover, document and share my journey of the last wild frontier. I want to inspire those who enjoy slow-paced, traditional travel, while respecting and understanding the local culture, whether this means they are inspired to partake in this same Patagonian excursion, or to travel somewhere else across the world, such as Mongolia, or to simply go for a day ride with their horses. I just want to encourage people to get out there with their animals, in a natural environment. That is my goal. I want to fill my followers with an unbridled spirit for life and adventure. The name “Patagonia” is known to many. ‘Pata’ translates to foot, paw or hoof. “Patagone” denotes going by foot, or in my case, by all three. This will be the ride of a lifetime.