Just don’t call them ponies! There is an awful lot of horse packed into these diminutive equines that possess an endearing shock of mane that goes in all directions. The Icelandic horses are Iceland’s most faithful servants. While their bodies may be small, their personalities are large, and their hearts even larger. Sure-footed, long-lived, and hardy, they possess great courage and endurance, and are able to cross even the roughest terrain. “They had us at ‘hello,’ and we wanted to bring them home,” says Debbie Long, one of a trio of Lexington (KY) women who joined a week’s ride, along with six other riders, in Iceland in July 2016.

Iceland is an incredibly beautiful country, with breathtaking landscapes not found anywhere else; a nation of 300,000 people, and 100,000 horses. They don’t import any livestock, and therefore no diseases; so vaccinations are unnecessary. When Long’s group arrived, their boots, gloves, and all their horse equipment, were disinfected, lest unfamiliar organisms be introduced.

Prior to arrival, the riders were asked to fill out a questionnaire that would help the outfitters determine riding ability, and then each guest was matched with a horse. “The first horse you get on is the one that you want to have the last ride on,” Long explains. “The riders could be paired up with ‘favorite’ horses, but we pretty much fell in love with the first one we rode. The name ‘pony’ never occurred to us after we got on. They are horses in every way but size: their attitude, their strength; they are sensible and brave, curious and kind. But they are all about business. Even the young ones are wise.” 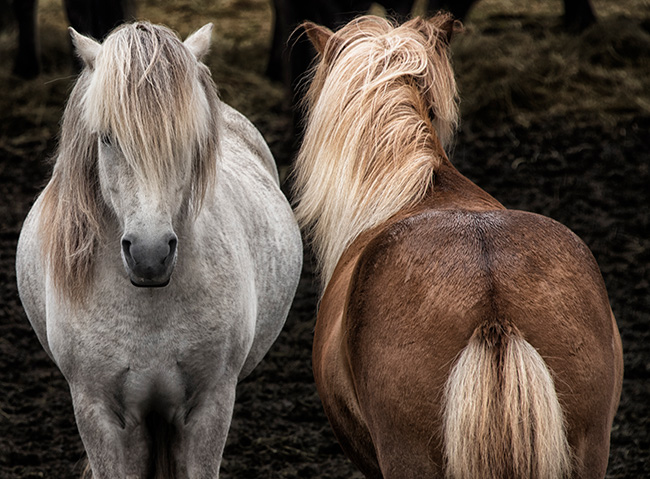 Long’s group had two guides: a man and his daughter-in-law; and two more team members accompanied them. These latter were in charge of the herd of about 25 horses that went along with the ride. One person rode in front of the herd, and one in back, and the horses just followed along pretty much in single file. They never deviated; they just stayed in line. There wasn’t a runaway, or a fight; they simply did their job. The riders, when not mounted, loved to walk out among the horses, and Boo Hardy, a member of the Lexington trio who is an accomplished photographer, spent a lot of time among them. “They came up to sniff,” says Hardy. “They are so curious, and so kind. None of us ever felt threatened. We were just in love.”

The riders noticed that a young mare had been introduced to the herd, and though she clearly wanted to be accepted, that hadn’t happened yet. She was always a little bit separate from the others, doing her best to be good. “She instantly became the crowd favorite,” Long says. “Everybody was silently rooting for her. The last day on the trail, two of the group brought her up to the place where the people were staying, and gave her special treats.” 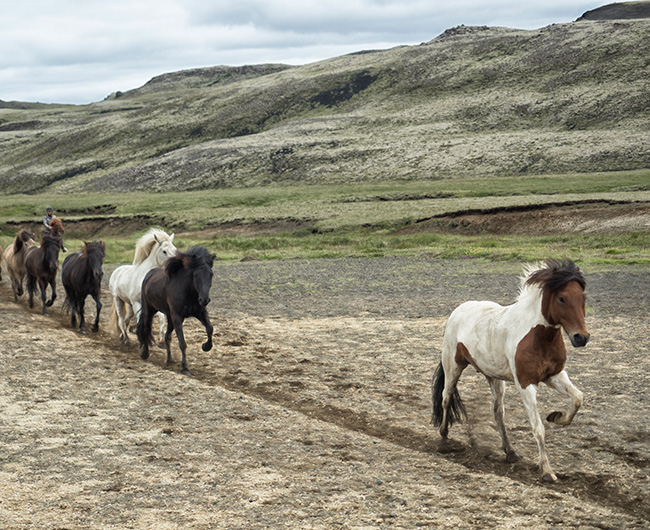 Conscientious equestrian girls, our Lexington three noticed that these horses didn’t get a lot of grooming, so Long occasionally picked up a lava rock to use as a curry comb, and gave hers a good scratch, receiving a delighted reaction in return.

After journeying for about four hours in the morning, they would stop for lunch and a rest. They would remove their saddles, and their horses would then join the herd accompanying them. The two men/women in charge of the horses would use stakes and string to make a ‘corral,’ and all the horses would crowd in together for about an hour-and-a-half rest, fenced, as an old Kentucky horseman once said, ‘by consent of the animal.’ The riders had started their day with breakfast, and at the same time, they were provided with a buffet to make lunch for the trail, which they ate at this first stop.

When it was time to ‘mount up’ again, the riders would put their saddles on one of the horses that hadn’t been ridden, and off they would go. Most days, they would be on the trail for about seven hours, according to Long, and they always rode two horses – and usually a third, after an afternoon break. “Strong and healthy, hardy enough to survive the Icelandic winter, these horses are so fit that it never felt like they were overtaxed,” she said.

The Icelandic horse has a special extra gait all its own, called the tölt, and Long couldn’t help smiling as she described it. “It’s the most incredible gait – similar to a saddlebred’s rack. You go so fast! When we first experienced it, we couldn’t stop laughing! The horses seem to love moving at the tölt, and they can speed through the open, sometimes rough, landscape for 20–30 minutes without stopping. We didn’t post, though we could have; we didn’t need to. The gait was smooth, and our saddles were like dressage saddles, with no knee rolls, made for riding with long stirrups and a deep seat.” 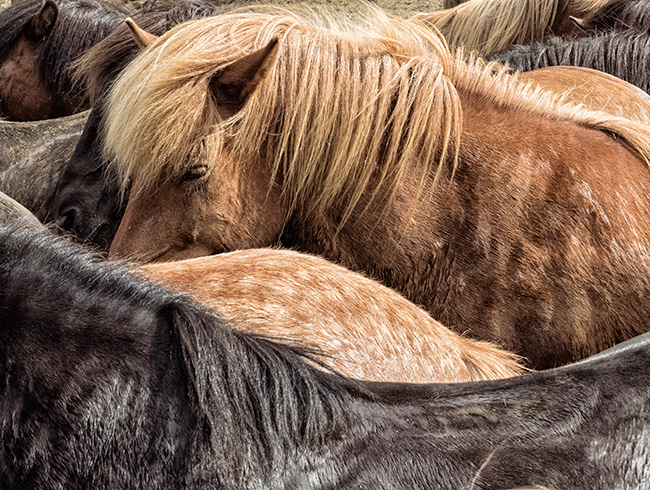 Iceland, an island nation that is part of Europe, is on a latitude similar to that of Alaska; in July, the days are warm, with about twenty-one hours of sunlight. Sundown was at about midnight, and sunrise at about three o’clock a.m. The rooms in the hotel (the first and last nights), and in the cabins along the way, were all outfitted with blackout curtains at the windows.

The groups fly into Reykjavik, “a cool town,” says Long. “Because of the extended sunlight, July is warm, and the flowers are gorgeous. It’s a fishing town, and the food is fabulous. (Long is a restauranteur, the owner of Dudley’s in Lexington, so she knows a thing or two about food!) I had read that the food culture in Iceland is challenged by what’s available, but it was very fresh, and delicious. Because of the limitations of availability, the food is creative and flavorful.” Long admits, though, that she drew the line at horse and puffin, both of which were well-prepared, but not appealing to her. The diet is predominantly fish, though beef was served, from local cattle, as no livestock is imported.

Beer and wine were always available, but Cabby Boone, one of the Lexington three, prefers vodka. So… no problem; she brought it with her, only to find that mixers were scarce, finding at one stop that the only mixer was hot chocolate. Oh, well – you roll with (or without!) the punches!

‘Making hay while the sun shines’ is more than just a silly saying in Iceland, it seems. The town was bustling all night long. The people, Long tells us, are lovely – easy-going, gracious, never stressed-out. Iceland is a popular tourist destination, despite the fact that hotels, restaurants, food, etc., are quite expensive. The hotel accommodations are European: small rooms, but very nice.

Icelanders still use the naming system of their long Scandinavian heritage, whereby the children, rather than being given a family surname, are named using the father’s (occasionally the mother’s) first name. For example, if Jón Einarsson had a son named Ólafur and a daughter named Sigriõur, their last names would be Jónsson and Jónsdóttir, respectively. When explaining this at one of their stops, the young woman who was one of the guides, told them, “There’s a registry kept by the Icelandic Naming Committee, and when you’ve met someone that you like in a bar, you go straight home and check the registry to be sure he’s not your cousin!”

On the trail, the groups stayed in hostel-type cabins, with bunk beds, in their own sleeping bags that they are told to bring with them. “This is not a trip for glamour,” declares Long. “On the trail, we were way out there, sometimes in places accessible only on horseback.” 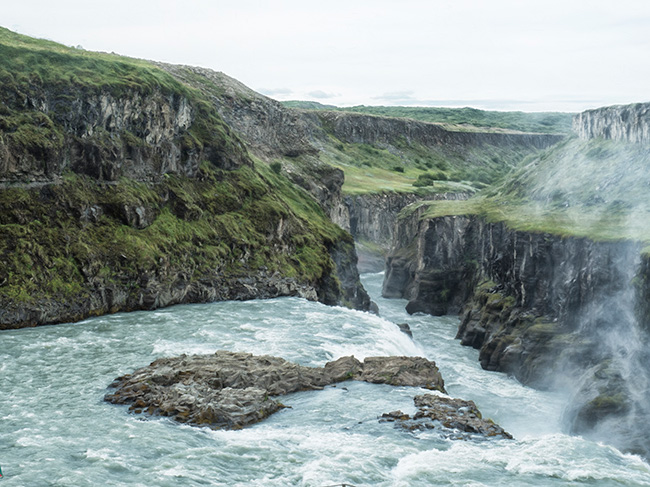 The countryside is stunning, with its volcanoes, geysers, hot springs, and lava fields; but you don’t see people. Though it’s a hot tourist spot, it isn’t ‘touristy.’ “We’d ride across lava fields, pebbly but not hard, that looked like a moonscape. And then,” says Long, “suddenly we’d come upon a breathtakingly gorgeous waterfall.” The only vegetation was a type of lichen, soft and spongy (“We had to feel it, lie down on it, to see how it felt,” Long grinned.)

One day it was rainy, so the ride was cancelled. But the guides handed out bright orange rainsuits for a hike to the hot springs. Upon arrival, they offered everyone the opportunity to swim. “There was a bathroom like you’d find at the Y, where we could change into our bathing suits,” Long recounts with a smile, “but people weren’t exactly jumping at the chance.” A veteran traveler, with an irrepressible sense of adventure, Long told herself, “Well . . . I’m here, and when will I ever have this chance again?” So, into her bathing suit. “Then, there were several hundred very chilly yards to traverse to get to the hot springs. Once in, though, I was glad I had done it, and it felt great. But no one was anxious to get out and make the trek back to the bathroom!” 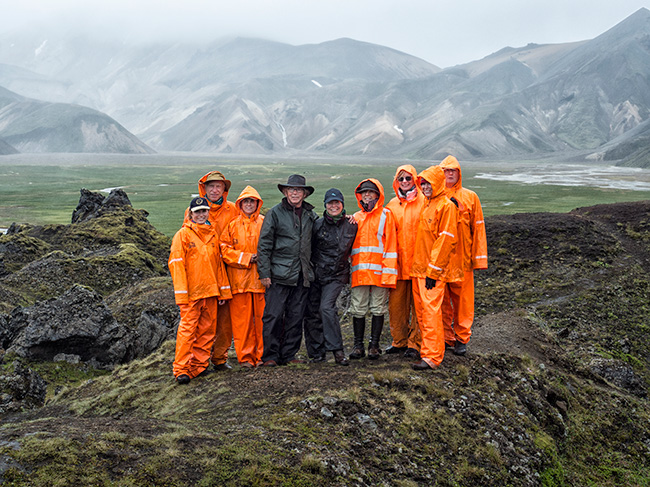 Hiking to the hot springs

An inveterate traveler, most of Long’s journeys are on horseback, and in the company of her two companions. She has been on many (Argentina, Chile, India, Kenya, Uruguay, Colorado, and Mongolia, to name a few). Her favorite, she says, was her trip to Africa, but this was her second favorite – and it’s largely because the horses were such a treat to ride.