“My relationship with each of my horses is unique,” said owner Lindsay Maxwell when asked about how her remarkable horse, High Society, came into her life. “He literally turned my head and made my jaw drop not once, but twice, before I had the good sense to buy him! Even now, nearly two years later, I still feel butterflies when I compete and get to feel the athleticism in his jump!”

Maxwell’s introduction to High Society, who goes by his barn name “Blue,” was more like a scripted encounter in a romantic movie than the typical tale of a horse trial and acquisition. Maxwell first recalled seeing Blue in California when he was competing in the 7-year-old jumpers, “I just happened to be walking by the main jumper field, and this gorgeous grey with an outstanding jump caught my eye.”

At the time, the gelding was showing under the name Diarado Blue, a nod to both sides of his breeding. Then owned by Alyssa Hecht, he was quickly moving through the jumper ranks and it was immediately clear to Maxwell’s keen eye just how much talent this young horse possessed. However, the duo didn’t get together right away for various reasons that summer. 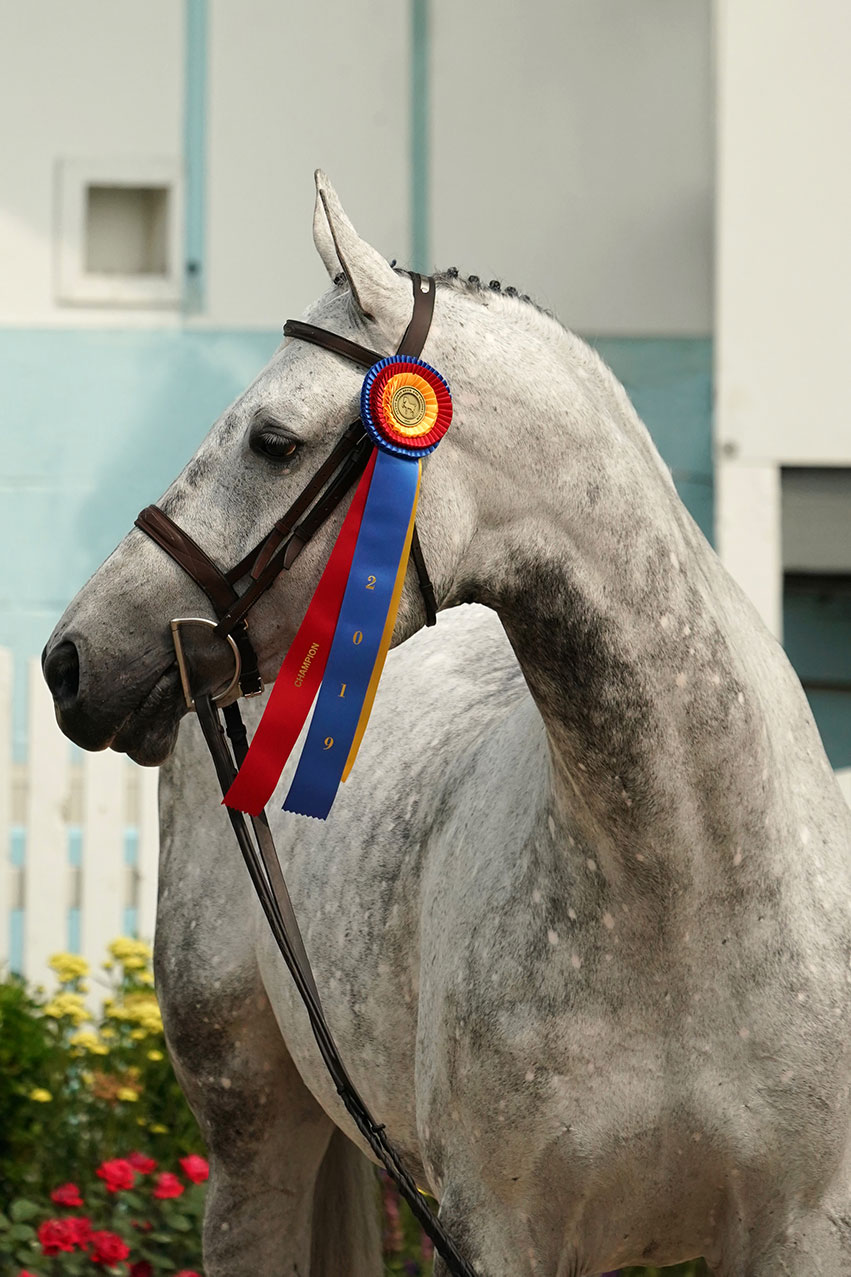 Like a romantic movie, their paths diverged before a fated second encounter. Meanwhile, Maxwell “could not stop thinking about what incredible potential he had.” It was a year-and-a-half later, while competing on the East coast during the Winter Equestrian Festival (WEF), that their paths crossed again.

Maxwell remembered, “Yet again, while passing a jumper ring, a spectacular grey with a jaw-dropping jump stopped me in my tracks. When I saw that it was the same horse from 18 months earlier, I knew that I had to have him. Lightning isn’t going to strike a third time! I remember calling Don Stewart, my hunter trainer, and telling him that this horse being on the East coast was too serendipitous.”

At the time, Blue was showing successfully in the 1.40m jumpers with Olympian Alberto Michán. “Blue was a very good jumper – but Don (Stewart) and I agreed that he would make an exceptional hunter,” said Maxwell. Stewart wasted no time in arranging for Maxwell to ride Blue – and this time she wasn’t going to let this special horse get away from her again. 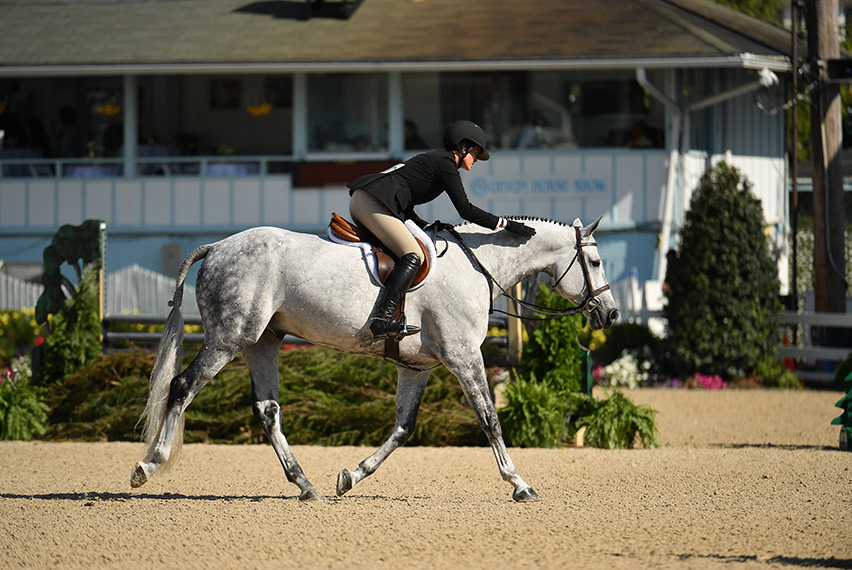 “Riding him for even a few minutes confirmed my every intuition that he would be the perfect horse for me,” said Maxwell. So, in the late spring of 2018, Blue officially joined Maxwell’s outstanding stable, starting his journey to becoming a champion hunter.

Looking through Blue’s records and photos it’s easy to understand how he literally stopped Maxwell twice in her tracks. Foaled in Germany in 2009 by Gestüt Lewitz, the grey Oldenburg is the progeny of Diarado and Chance For Ever.

Diarado and his offspring are well-known and prized across multiple equestrian disciplines – most especially as jumpers. Like his sire, Blue has a gift for astonishing jumping form. His strength and the impressiveness of his scope is complemented by his light, floating gait. Like many of Diarado’s offspring, Blue is agile, intelligent, and possesses an inherent aptitude for competition, making him a successful show horse.

Blue’s dam, Chance For Ever, also comes from a prestigious line of breeding and is a progeny of the legendary Chaco-Blue. Indeed, his barn name “Blue” intends to honor the DNA and spirit of Chaco-Blue that are abundantly evident in High Society. Similar to Blue’s sire, Chaco-Blue’s progeny are world-renowned show jumpers with a reputation for jumping technique, as well as their ability to rise to the top during tough competitions. 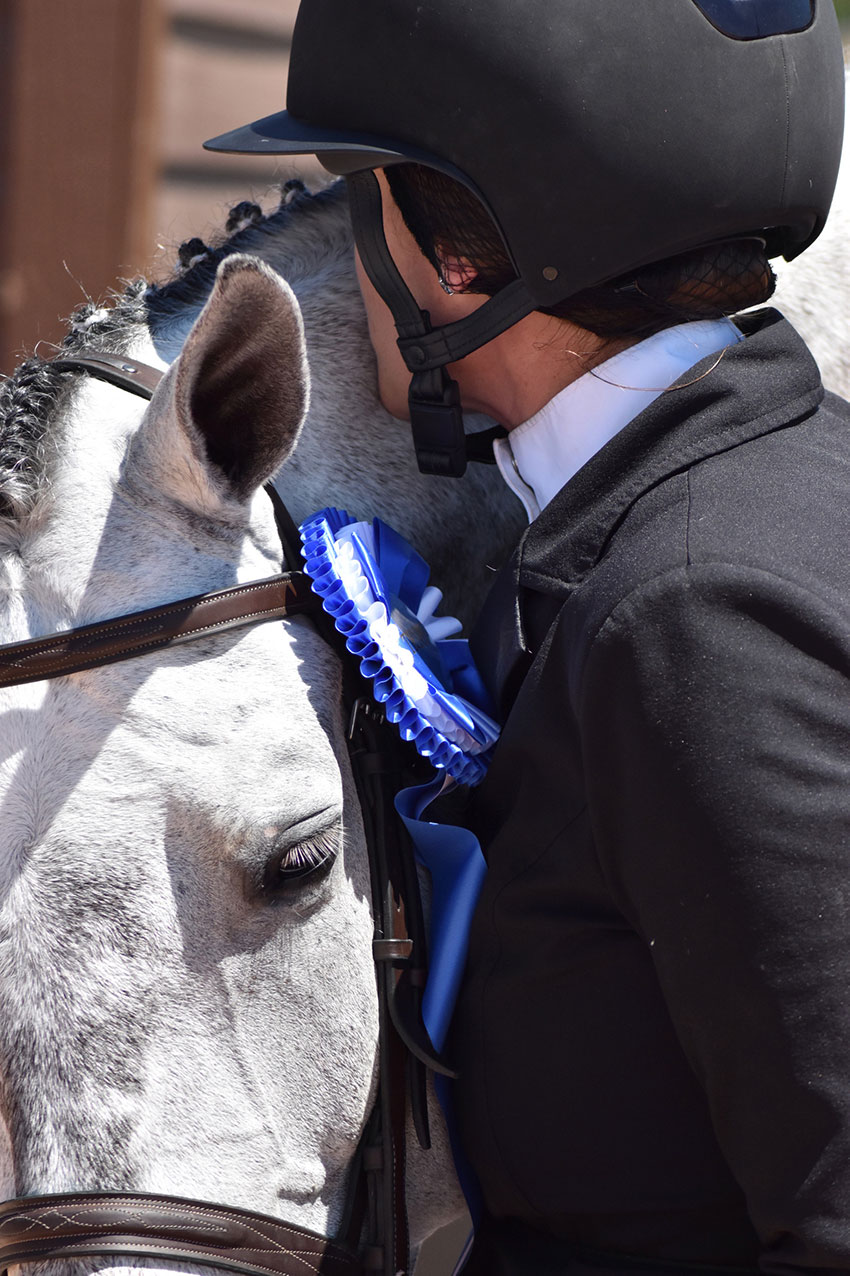 As if foretold by his name, “Blue” has become synonymous with his show record, a blue ribbon-worthy excellence in the hunter ring. This is exemplified by the numerous championships he earned quickly following his transition to the hunters. Indeed, Blue swept every over fences class and also won the under saddle competition en route to winning the 3’6″ Green Hunter and Incentive Championships at one of his first competitions as a newly minted hunter under Maxwell’s ownership. This initial success was a harbinger of many accolades to come, which culminated with champion tri-color honors at the 2019 WEF World Champion Hunter Rider week and the 2019 Devon Horse Show.

Obviously, championships earned amidst the intense competition during WCHR week at WEF and the Devon Horse Show often require more than a “jaw-dropping” jump, and it’s Blue’s remarkable range of gifts that make him so special. “Blue is that rare ‘hat trick’ of limitless scope, perfect form, and elegant movement, which is what makes him so special. Few horses who jump the way that he does also regularly win the under saddle at the biggest shows. And, to perform so exceptionally with such grace and composure is even rarer yet. He is a perfect gentleman in every sense of the word,” said Maxwell.

Maxwell also noted that “Anyone who has watched him knows his jumping style is special and that he also wins the hack, but what makes Blue one-of-a-kind is his sweet disposition. Blue is the kindest, most willing horse with whom I have the privilege to work. I know with confidence every time we walk in the ring together that he is going to give me his best effort.”

The duo’s unmistakable chemistry extends beyond the ring to their time together at the barn, which Maxwell attributes to Blue’s all-around dedication, “He always wants to do everything correctly – I can honestly say in nearly two years that I cannot think of a single time that Blue has ever been ‘naughty.’ He has a pony face that is always hanging over the stall door waiting for treats from anyone who is willing…but never begs!”

It comes as no surprise that Blue is beloved by Maxwell and her team. His daily schedule is overseen by Maxwell’s manager, Sarah Gordon, who not only ensures his care, but also that his time in Maxwell’s program is one of balance. Maxwell described how Blue enjoys “trail rides and long, loose hacks on grass. He is such a natural born athlete that we don’t have to work too hard at home in between competitions.”