Have You Ever Saved a Horse In Trouble?

In every issue of H&S, we choose a question to ask three trainers for our “Professional Pop Quiz” column. For our upcoming June/July issue, to be released on June 7, we asked trainers “Have you ever saved a horse in trouble?” The answers we received were varied and inspiring. International grand prix rider and trainer Molly Ashe-Cawley sent us an entire story that, while too long for our print magazine, was just too good not to share. Get out the Kleenex and enjoy Molly’s answer:

I have been thinking about this question all day and how best to answer it.  I would like to believe that I have saved many horses in some capacity, during my lifetime, but truth is I think they have saved me more times than I have saved them.

Have I ever saved a horse in trouble?  I can honestly say I have certainly tried! My life with horses has been centered around competition, so my focus has always been knowing each horse’s personality and their overall health and fitness.  I believe horses communicate quite well, if people are willing to listen.  Of the three horses that I dedicated everything to helping, Zantino is the one I still think of the most.

I was in Europe looking for horses for customers when I found Zantino.  The rider and sponsor had just had a falling out and the horses were to be sold immediately.  I wasn’t looking for myself, nor did I have anybody who wanted to buy a horse for me at the time, which always seems to be the case when you find the one!  We arrived at the farm to try the horses and there was a little, impatient, rather attractive, 15.2 hand horse standing on the cross ties.  They said he was 11 years old and had jumped grand prixs and nations cups many times with his previous rider.

I was thinking to myself, why am I even riding this horse, I don’t have the money and he is 11 years old, not to mention 15.2.  For the record, I like small horses, so you know this one is especially small if I keep mentioning it….  Long story short he arrived a few weeks later in Florida and became fondly known as Shorty.

I showed him in Tampa for two weeks before he got hurt and needed 6 months recovery time! I was just starting my own business, which was based near Millbrook NY, so Shorty spent the summer rehabbing at the new farm.  When we brought him back into work the spunk was missing and I assumed it was from lack of fitness. Once I started showing him again, he was still not the same horse I had bought and showed a few times.  The vets examined him many times and reassured me that he was in good shape and nothing was wrong, but the little voice in my head would not stop saying there was something wrong.

Pretty soon the Hampton Classic rolled around and I showed Shorty in the Grand Prix Qualifier, in which he jumped a beautiful clear round.  I was so happy, I thought that finally the horse I bought was back.  But Sunday told a very different story…. he felt like he could not jump a schooling jumper class much less the World Cup qualifying Grand Prix.

Upon arriving home in Millbrook the next day he developed a temperature of 104 and 4 telephone poles in place of legs, also his eyes and gums where jaundice.  The vet diagnosed him with ehrlichiosis, which was a tick born disease.  A few weeks later the Lymes test results came back and my vet said it was the highest titer he had ever seen.  I felt like this was one of those lessons in life you never wanted to learn and still to this day regret not knowing to test the horses at least 2 times a year for Lymes disease in that area.

We treated him with doxycycline and within a week I started to see little glimpses of the horse I had rode in Europe.  I showed him at Harrisburg in the speed classes when he was just finishing his treatment and he was super.  I then took him to Washington where he was super again.  From there we shipped to Florida for a little rest and relaxation and then to prepare for WEF.

But, as soon as we arrived, Shorty went downhill again and my vets decided to treat him with tetracycline, which is stronger and more effective at killing the virus than the oral treatment.  Shorty’s condition improved almost immediately.  Around this time I noticed he started doing a weird twitch with one of his back legs occasionally.  Dr. Steele and Dr. Ober both watched me ride Shorty and did not feel like it was anything to be worried about, but I believed it was something because it was new. But he was still jaundice and his bilirubin was extremely high.  The tests continued, next was a liver biopsy, which did not shed any light on what the problem was except he wasn’t suffering from liver failure.

We spent a lot of time shipping Shorty back and forth to the clinic in Wellington that year and that was when he started tearing the trailer apart every time we put him on it.  He had traveled the world without incident and now every time we loaded him on the trailer, he tried to kill himself.  His spirits went up and down, but he remained jaundice and his bilirubin remained high, which had a small army of vets scratching their heads unable to determine the cause.

His condition kept steadily deteriorating to the point where my manager Suzie and I took turns spending the night with him off and on for month while the vets tried to figure out why he was literally dying slowly but surely right before our eyes.  We spent our evenings on the computer researching and researching every detail of every symptom or what we thought were symptoms.

At some point we realized that every time he was put on antibiotics he was instantly better and he became instantly worse when we stopped administering them to him.  I discussed our theory with Dr Ober, he said it was worth a try since we were leaving for Kentucky in a few days and there was no way we would be able to take him with us in his current condition and I could not leave him in Florida because I knew I would never see him again if I did.

We put him back on tetracycline and within 2 or 3 treatments he marched on the trailer and shipped all the way to Kentucky without incident.  He even laid down and slept part of the way in his box stall.  Now Suzie’s and my theory had some credibility with Dr. Ober, so I was hopeful some answers would soon follow.  Dr. Ober came to evaluate him a few days after we arrived in Kentucky and during the exam Shorty started to have some sort of a seizure.  Dr. Ober said it was the strangest thing he had ever seen because he believed the horse was aware the whole time of what was happening, but he could not control the convulsions.  This was not good news and everybody recognized we were on borrowed time at this point.  The vets all concurred to send Shorty to Fairfield Equine and treat him in the clinic with an aggressive antibiotic treatment.  They gave him double the dose of IV tetracycline for double the time of the normal Lymes treatment.  Dr. Mitchell said it was possible that the treatment itself might kill him, but we all agreed there wasn’t another option at this time.

The treatment worked and Shorty never had any problems during or after the treatment was done.  We took him to Devon for his first show in almost 2 years to do some speed classes and I am not going to lie I was scared to death.

Shorty was a show horse and it is all he really wanted to do, but I had a hard time believing this was over and I could not bear the thought of something happening to him while he was in the ring.  However, all turned out fine and he was really happy to be doing what he was born to do again.  Six weeks in Calgary, Canada was the next stop for 6 Spruce Meadows, where he was amazing.  He won 3 or 4 classes and became the favorite in the prize giving ceremonies, in fact the presenters all knew him by name and gave him extra carrots.

I will always find peace in the fact that Shorty had a great summer that year.

He was happy and healthy and had the results to prove it.  I showed in Europe that fall and Shorty was one of the horses I took with me.  Right before the horses flew to Europe, Shorty had another episode, like the one he had had in Kentucky.  I was devastated and heart broken because somewhere in my heart I knew that whatever was wrong was finding its way back and there wasn’t anything more we could do to stop it.  I also knew that Shorty did not want to be sick anymore.  The horses were in Holland and I was in Florida when I got the call I had been dreading for so long.

Shorty had another episode and had run himself into his stall wall repeatedly.  I knew the time had come to let him go, which was one of the hardest decision I had to make.  I tried to find peace in knowing how happy he was in his final months.  I believe my team gave him those months and I know he was grateful to us for them.

The autopsy showed that he had a large tumor on his pituitary gland, which caused him to release adrenaline in massive amounts, and as it grew larger the episodes became more frequent and lasted longer.  Finally, we had the answer that had alluded us for so long.  I don’t know why the antibiotics made such a difference along the way, but I have to believe they either shrunk the tumor or slowed the growth.

In a very odd coincidence, the rider who had ridden Shorty before me, also had been diagnosed with pituitary cancer the summer before Shorty passed away.  The guy was in his forties and passed away within four months of being diagnosed.  Maybe it’s just a coincidence, but I think there has to be something in common that could have caused them both to die from the same cancer within a year of each other.  I know this is probably a strange answer to the question, have I ever helped a horse in trouble, but I believe Shorty’s life would have ended a lot sooner without us.  We all loved that little horse more than words can say.  He will live in my heart forever. 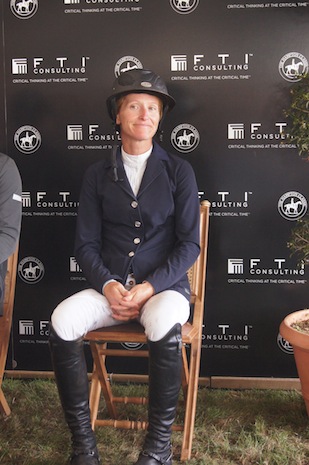 Molly Ashe-Cawley at the 2012 Hampton Classic