What to Expect When You’re In Training

The third in a three-part series exploring the many components of equine breeding, and the life of the breeder who must handle them all

What do Buck Brannaman and Jimmy Wofford have in common? It certainly isn’t the hunter/jumper world. Or is it? These two horsemen may seem to be from opposite ends of the horse world spectrum, and I would have imagined that what they offered would not really apply to myself or my horses, until some of the horses I bred started to show me that I had a lot to learn!

As a horseman, I always strive to gain more knowledge and learn (good or bad) from everyone I can. As a breeder, I have finally realized why I need all of this information. Every horse is so different (even full siblings) and it is so important to set each horse up for success in their future jobs, whatever that may be.

This brings me to why I now know exactly what three-day eventing legend Jimmy Wofford, and horseman Buck Brannaman can bring to the hunter/jumper world.

I have been through many different routines in “starting” the horses we produce at Jaz Creek Farm in Petaluma, California. I used to prepare and ride foals as a junior and I started some of mine completely on my own. Then Thomas came along. Pretty much from the day he was born, I knew it would not be wise for me to be the first person on his back. He came out tough, he had so much self-confidence paired with anxiety that he would run me down without hesitation, and strike out if he perceived a threat. I did not understand what a lot of his behavior meant, and would have done things very differently from the beginning if I had. 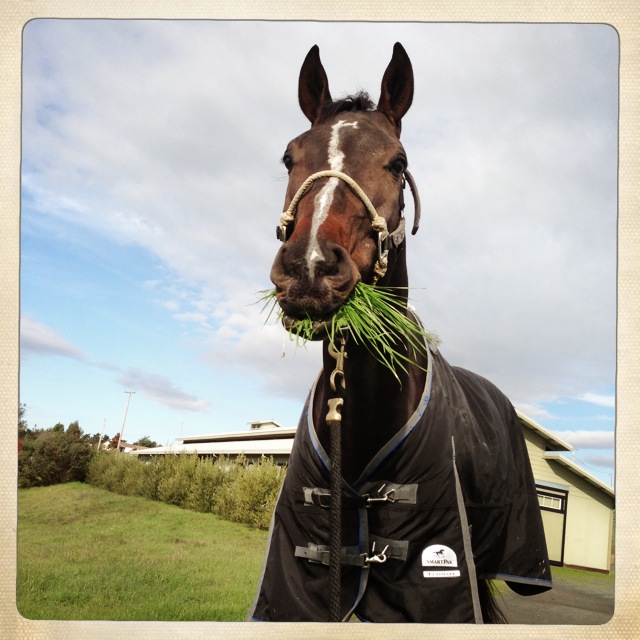 I sent Thomas to a “cowboy”, a guy who was recommended by local hunter/jumper trainers who had had to deal with their own problem horses. What I got back was a nervous horse with natural anxiety, now compounded with man-made blocks and fear. Not an easy horse to ride or sell if you are an amateur rider! That experience led me to want to find a better way. I researched extensively to see if there were young horse starters out there that used gentle methods to bring out the best in a horse.

Kindergarteners in A College Class
This year I thought I really had done my homework when I took two of my three-year-old fillies to one of these “colt starters.” My experience was awful. My two fillies, both of whom had been handled lightly but correctly up to this point, both shut-down in fear. One tried to climb out of the round pen when her girth was tightened too fast. It was as if she thought she was being suffocated. She also managed to buck off this very well known colt starter… and now her bucking is a problem that is taking quite a bit of time to correct, given that she now fears movement on her back.

Worst of all, the horses were not given a chance to succeed. They were forced into new surroundings and had everything thrown at them so quickly. It was like going to a college level lecture on your first day of kindergarten. I ended up taking the fillies home after three days; they were both sore, with bloodied mouths, and quite a bit of new fear of people. Once again I had trusted the recommendations of some of the best in the business, but it simply did not work out!

But still, I thought that there had to be something better. Horsewoman Tina Cornish, a good friend of Buck Brannaman, invited me to a clinic at the Tehama County Fairgrounds this April to see what his system was all about. I had seen the movie “Buck”, I was impressed, but I still did not know if Buck’s way of training was for me.

Group Psychology Sessions
As an admitted “hunter/jumper princess” I was very overwhelmed by the close to thirty horses in the ring at the clinic with their owners of varying skill levels, going in every direction possible. But I sat in my auditor’s seat and watched the entirety of the four days.

As Buck spoke of horses, people, and life in general, I began to realize that his clinics were more than just horse training, they were a huge group psychology session. He teaches how to read your horse’s emotions, how to channel the emotions and energy, and how to produce a result that is clear to horse and handler.

Listening to Buck made me realize how much more I could give my young horses. This is not to say that I will be at the next hunter/jumper shows flagging my horses in rope halters (at lest not all the time!) Just from watching and absorbing, I took away some very valuable tools. I am now more able to be a kindergarten teacher when I need to be, and transfer that through the levels.

The best part about the clinic was that there were hunter/jumper people participating and they all were able to improve their communication with their horses within our discipline. Ali Cornish was an example of this. She is Tina’s daughter, and has been riding with Buck since she was a kid. Her horse Freddy had been through a few different programs and was stopping. Ali had taken him back to the basic groundwork and had been slowly building him back up, showing in smaller jumper classes through the spring. At the clinic she did the foundation class with him, just to hone her skills and make sure his groundwork was in tip-top shape. The following week Ali and Freddy headed to Peter Wylde’s barn in New York, where she is now working as his assistant. Freddy has been schooling up to 1.30m and looks to be heading back in to some bigger classes soon. Without the time spent giving Freddy confidence from the ground and through cross training that would never have happened. 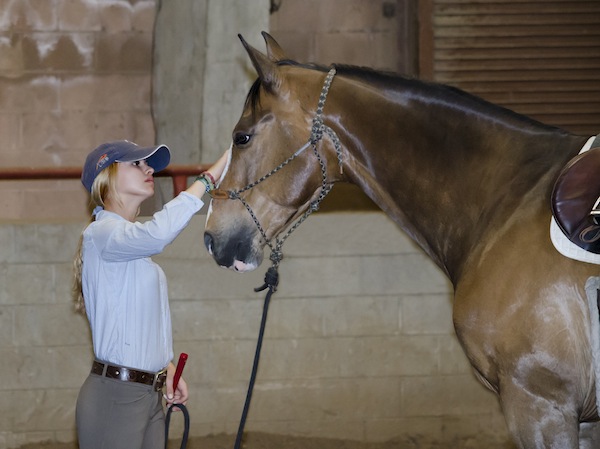 After the Buck clinic I started to feel like I was on a path that made sense, but it was still not a complete picture. I wanted to know how to incorporate more jumping or English specific tools in to my training “toolbox.” Once again Tina invited me to a clinic, and once again I saw just how useful outside influences can be when working with young hunters or jumpers.

Ah-ha Moments
This time it was a Jimmy Wofford clinic, held at Eventful Acres in Oregon House, California in June. I was able to watch this Olympic veteran from the sport of eventing teach people the importance of not over-facing your horse, especially when asking them to do something that is inherently difficult. He showed us how to build confidence in young horses by introducing them to new concepts slowly and really echoed the themes of Buck.

Interestingly, one of the biggest ah-ha moments at the clinic came when Jimmy was taking a break before dinner. Many of the horses had never been through the cross country water obstacle before and were practicing going in and out at the walk, trot, and canter. There was a pony there that decided he was not interested in playing and Tina was asked to come try to help. Through Buck’s methods, a lot of patience, and some serious sweat on the rider’s part (it was about 102 degrees out) the pony wound up practically swimming laps in the water he became so comfortable!

Watching pony and rider successfully navigate something difficult and come out the other side better for it cemented in my mind why thinking outside the box is so important when starting young horses. Imagine, a young horse that has been through water obstacles and over cross-country jumps, in the hunter derbies eventually, that is the horse I want to ride.

As my horses get older and I have more to start and ride it is my job to find what tool fits best with each horse, and lay the foundation for them to be the best they possibly can be at their job, be it a grand prix jumper or short stirrup hunter. Luckily, if you are willing to look, there are so many tools out there that can bring each horse success.

Buck put it so succinctly when he said that “to get really good with horses you will mess a few up”… as for Thomas, he’s now turning a corner and is starting to become an agreeable guy who likes his job. Best of all, he has shown me how to listen to my horses and never stop working on becoming the best horseman I can be.

-by Jeanette Gilbert-Gnazida, Jaz Creek Farm
This article was published in the Aug/Sept issue of Horse & Style Magazine. CLICK HERE to read the entire issue online!