Georgy Maskrey-Segesman had never seen Eurocommerce San Francisco until he arrived in the United States as a surprise gift from her father. She saw a video of him while in the hospital undergoing multiple surgeries due to a compound fracture in her leg—and fell in love. Gerco Schröder of Eurocommerce Stables in Holland originally rode “Frankie” before he arrived at Maskrey’s barn at age thirteen.

When he arrived, Maskrey was still twelve weeks away from being able to ride him, but a bond formed between the two right away. “He was super athletic, and loved to work,” Maskrey remembered. Once she was back in the saddle, the two competed in a handful of grand prix, including the Arizona Desert Finals in 2009 (placing 7th), the Memorial Day Classic Show at the LAEC in 2009, and the 1.45m division at Spruce Meadows. Frankie’s ring presence did not go unnoticed, the pair even made the cover of the July 2010 issue of California Riding Magazine. 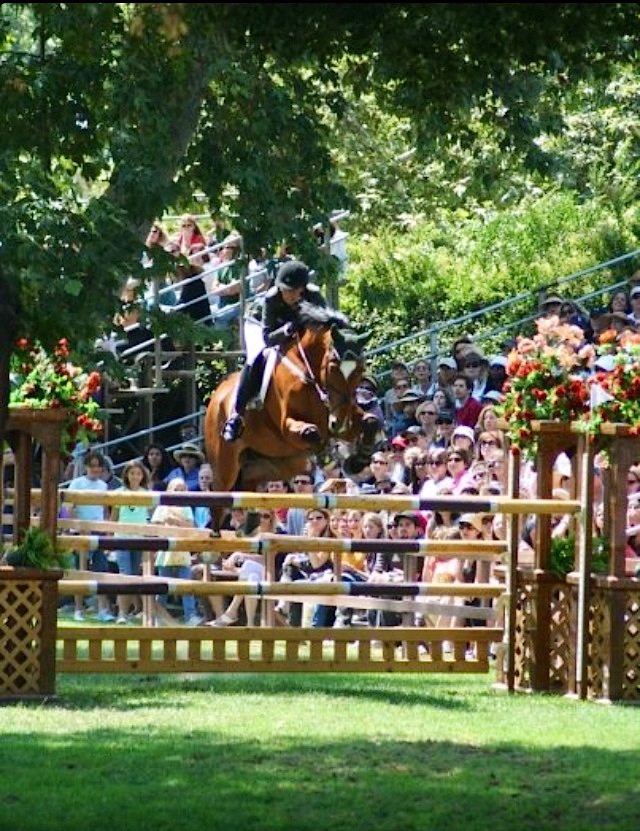 Frankie in his jumper days, in the grand prix at the Memorial Day Classic in Los Angeles, CA.

When Maskrey decided to start a family, Frankie was leased out to Erin Bland at Sonoma Valley Stables under the care of Hope and Ned Glynn. “Frankie has started a lot of people in the jumper ring—he’s solid as a rock,” notes Maskrey of the 17.2hh Swedish Warmblood. He had no problem stepping down to meet the amateur rider’s needs, as he was a seasoned competitor in the show ring, and took each round as if it was as important as a grand prix. Bland and Frankie competed in the adult amateur and modified amateur jumpers during the 2010-2011 seasons, with great success. Frankie then went on to stay at Sonoma Valley Stables, partnering up with Lucy Sogard. Sogard rode Frankie to wins in multiple equitation classes, qualifying for the CPHA Junior/Amateur 3’6” Medal, the ASPCA Horsemanship Medal, the Norcal Junior/Senior Medal, the Hudson & Co. Junior/Amateur Medal, and the CPHA Child/Adult Medal. A truly versatile horse, Frankie showed his adaptability by settling nicely into his new role as an equitation super horse.

Tonya Johnston, equestrian mental skills coach and author, had the opportunity of a lifetime when Sogard left for college this July, leaving Frankie without a rider. A week before the PCHA finals, Johnston started a short term lease on Frankie. “All the stars have aligned for us to show together,” says Johnston, who normally catch-rides horses during the show season. The stunning horse that she had always eyed in the barn could finally be her partner.  At 20 years old, Frankie was still nothing but a true professional, “he is very straightforward, and has the biggest heart,” says Johnston, “nothing is really going to faze him.”

With the coaching help of Kelly Van Vleck, Johnston went on to win the PCHA finals, nailing the work-off after two great rounds. Additionally this past week, Johnston placed reserve in the Hudson & Co. finals at the Sonoma Horse Park. While Frankie competed in high-level classes all throughout his life, he really showed his grace and poise when asked the difficult questions of an equitation finals course. The jumps didn’t need to be 1.60m for him to show off, he jumped with style no matter the height. When asked why they are such a successful pair Johnston replied, “he’s one of those horses that always says yes, he has a beautiful rhythm and you know you are sitting on scope.”

A personality in and out of the show ring, Frankie is a barn favorite, “he’s just a love, a big teddy bear,” states Johnston. His quirks? “He’s spoiled, and tries to pickpocket people for treats walking back from the show ring!”

A very focused, but excited Johnston will compete in a few weeks at the Foxfield Medal Finals, and end her lease with Frankie after competing in the Norcal Medal Finals. “I’m so lucky to get to ride him,” beams Johnston. 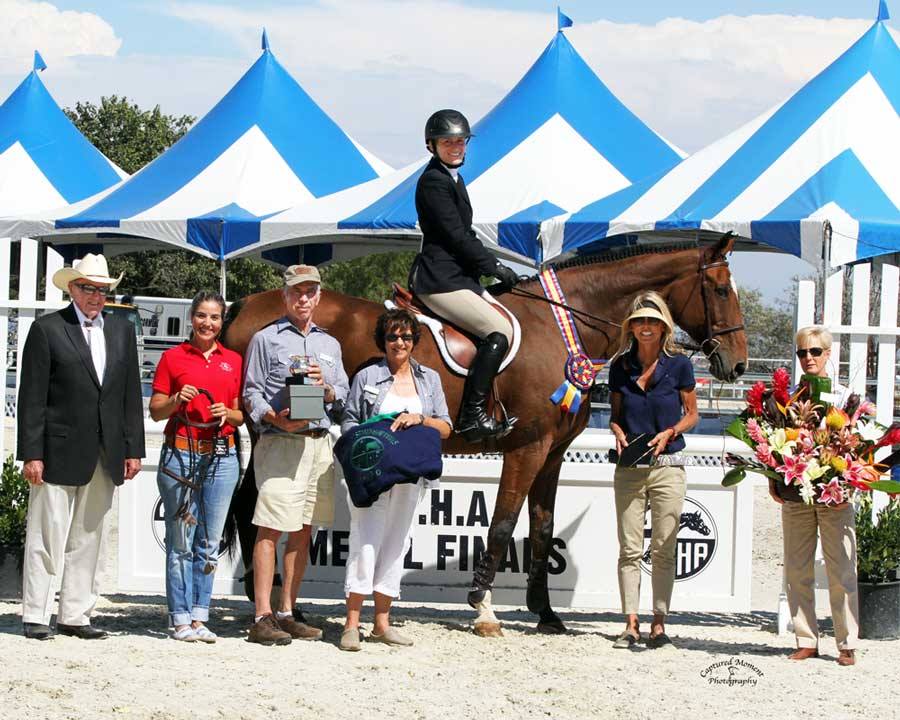 So what is the secret to his success and his longevity? “It’s a testament to Hope and Ned’s program to have him keep going so well,” states Johnston, “we pick and choose what classes we want to do, and don’t ever overdo it. I know they will keep him happy and doing his thing, and I know he will be there for whoever rides him.” The hearty warmblood isn’t ready to quit yet, but Georgy Maskrey-Segesman hopes to retire him with Sonoma Valley Stables when he decides he’s done, as it has become his happy home.