“Fortune Favors The Brave” is the inspirational slogan written inside all equestrian belts in the Hoffman household. I’m convinced that it was the lucky talisman that helped my daughter Zazou Hoffman win the 2009 Maclay Final.

After being equestrian support staff for many years with Zazou’s horses and ponies, the roles are now reversed and today she coaches me on my horse. I’m mostly a casual rider. And until now, I’ve always let my daughter do the showing and been satisfied to watch from the rail.

Let me preface this by saying that I’m not an uber-athlete, but together, my family and I climbed Mt. Kilimanjaro in August. It was one of the most arduous things I’ve ever done. At 19,400 ft., fitness, determination, and a dash of turpitude were requisite. It was 16 degrees below zero at midnight as we started our ascent with tiny headlamps illuminating a seemingly never ending, vertical pile of shale. By dawn we arrived (I’m cutting to the chase here) at the summit. Triumph!

That incomparable feat gave me the courage to attempt the venerable Foxfield Jumping Derby in Westlake Village, California during the first weekend in October. With plenty of confidence and no competition experience…that’s right –no competition experience– it was going to be a challenge. Rather than enter a rusty stirrups class to get my feet wet, I preferred to go all in, and the Foxfield Jumping Derby was the perfect goal. There would be nothing “rusty” about this rider; I much prefer the title of “late mid-century vintage rider.”

I had the horse, Wervelwinde Van Kalken (better known as Walker), who is a Quidam de Revel offspring with years of eventing experience in Europe, so all I needed to do was practice! For months my fabulous coaches Zazou and Meredith Bullock worked with me on banks, ditches, triple bars, Swedish oxers, jumping in and out of the ring, and all at the requisite gallop to avoid time faults. The Foxfield Jumping Derby has two sections, the Calabasas Saddlery Junior/Amateur Jumping Derby, and the Open Foxfield Jumping Derby. After my training, I was ready and excited to take on the Junior/Amateur Derby.

Bravery Required
According to judge and past Foxfield Derby contestant Rob Gage, “The Foxfield Derby is its own unique event. There is nothing like it anywhere in the U.S. It is a combination of regular fences that would be found in a show ring, and outside natural (and sometimes solid) obstacles that might be found on cross country, or a jumping derby in Canada or Europe. This event is not for every horse or rider. Horses have to be comfortable jumping natural obstacles, but still be careful enough to jump the regular fences clean. And the riders have to be brave when their mount needs them most.”

Thousands of spectators have come to watch top riders from all over the West compete at Foxfield. The derbies have proven to be great testing grounds for future champions. Olympic Gold Medalist Will Simpson, three-time World Cup Finals Champion Meredith Michaels-Beerbaum, Susie Hutchison, Hap Hansen, Mark Watring and others have ridden the course. This year, several of them were on the grounds training clients.

On derby day, I arose at five in the morning and navigated my trusty Brenderup trailer, loaded up with my horse, equipment and Zazou in the passenger seat, out to Foxfield. After drawing #33 in the order of go (I admit I thought about trying to trade for #2 in the order, just to get it over with) and walking the course many times, I did my warm up fences, tried to do my best “Zazou” imitation and galloped into the ring. Towering eucalyptus trees and golden oaks surround the Main Ring where my course awaited. I galloped through the timers and over a twisty turny track inside the ring, then out of the ring up and over a daunting grass bank, through a cunningly concealed sunken road/double bank and out into the field where more banks, ditches, skinny gates, hidden tree trunks awaited me. Then it was then back into the ring to finish the first round.

An Unexpected Thrill
Everyone who goes clean returns for the jump-off. In my case, it was completely unexpected, but thrilling to jump clean in the first round and come back for the jump-off round.

I finished an astonishing 8th, with a very respectable time. Congraulations to winners Zoey Pacyna and Wonderful. My class utilized the same obstacles for the higher Open Foxfield Jumping Derby sponsored by Bob Smith BMW, which took place later that afternoon. Georges Bittar won the Open Derby on Pizzazz B.

So, why attempt a competition like this? Zazou’s Facebook post that day said it all: “Congratulations to my amazing mother Winter Hoffman for a job well done today in the Foxfield Derby!!! She rode flawlessly to a double clear eighth place finish in her first horse show ever with huge credit due to her awesome horse Walker! Really goes to show that it’s never too late to challenge yourself to do new things. Also, big thanks to Meredith Bullock for all her help preparing Winter and Walker. She couldn’t have done it without you! Love you Mama Hoffman!!”

Fortune does indeed favor the brave. 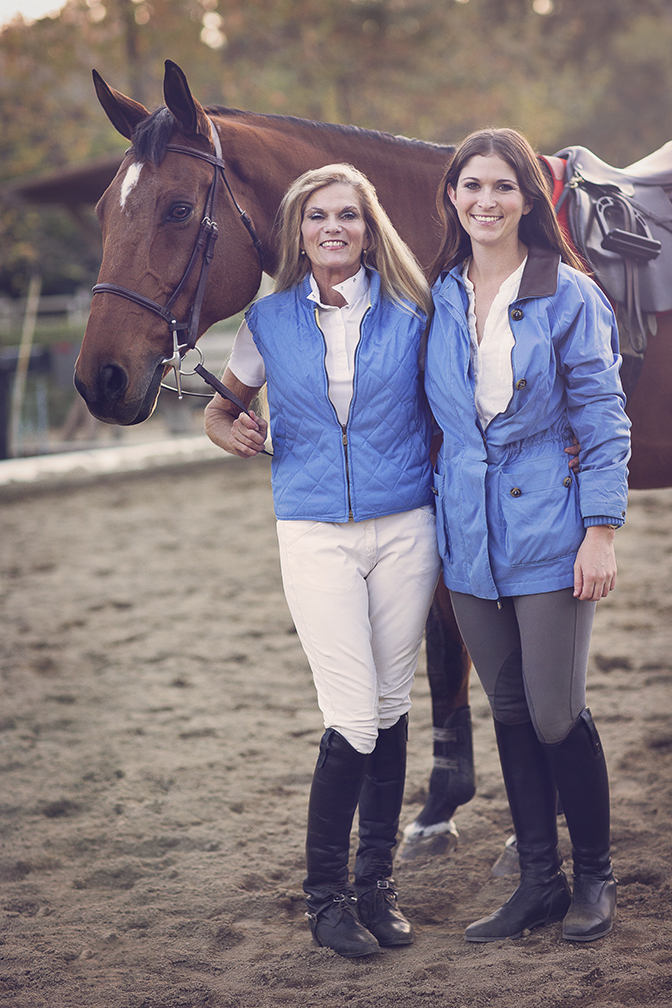 The history of the Foxfield Derby and the atmosphere that pervaded throughout the day simply added to the excitement. Halftime entertainment was the world-renowned Foxfield Drill Team. The riders execute a series of choreographed routines, all without a bridle or saddle. Meredith, a Foxfield alum, remembers “riding around the field with nothing on my horse, or better yet, falling off in the ‘wire class’.” In those days, NBC televised the Foxfield Derby. “It was one of the first equestrian events to have great TV coverage. The television exposure was great and drew people in,” recalled three time Derby winner Susie Hutchison.

The Late-Mid Century Vintage Rider
After the Derby I had an interesting conversation with Michael Page, who judged the competition. He flew in from New York to officiate, and gives many equitation and jumping clinics around the country. He commented that if you take the top ranked junior riders and separate out the ones who can “really” ride, it’s the experience of having done a derby such as this one that gives them the skill set to handle the tough competitions.

Zazou’s trainers Meredith Bullock and Missy Clark have been saying this for years. Still, as an adult who had never been in a jumping competition, and even with solid preparation and quality horse, I felt that a few talismans were in order for luck. Hermés has always been one of my talismans, so I wore my grandmother’s intaglio ring with the head of the winged Greek god Hermés on it for derby day, and asked for the loan of a Hermés saddle pad and ear bonnet. I also borrowed Zazou’s lucky show clothes and World Champion Hunter Rider cooler.

The whole experience was truly memorable and I loved the support of my fan club, young riders Claire Monaco and Darcy Rubin. They ride the pony version of my horse Walker. Once they announced they were coming to cheer me on, there was no turning back. To these girls, I was indomitable. Doubt never enters the minds of the show jumping novitiate! Who knows what will happen next year; this late-mid century vintage rider may be back!