If to you, the perfect job with horses includes cleaning stalls in the shadow of a castle and rubbing elbows with royalty, then today is your lucky day.

None other than Queen Elizabeth (or her servant’s servant’s servant) is looking for a groom at Windsor Castle, which lies about 40 minutes outside of London, England. The Queen lives at Windsor Castle for much of the year, and keeps her personal riding horses and ponies there.  Whenever your Facebook friend posts yet another photo of the Queen hacking along a forested trail (and still riding helmetless, something I always find hard to believe) you can bet that the photo was taken at Windsor Castle.

According to the official job listing, the new groom must be “a capable rider” (check) with “experience of stable management” (hmmm, typo or simply British jargon?) and be able to handle all aspects of horse and pony care, as well as cleaning and maintaining associated tack (read: the job of groom is the same no matter whose brass you’re shining!)

Still interested? The job became available on April 11th, and applications close on May 2nd, 2014. Other required skills include:

The Royal Mews at Windsor Castle operate in tandem with The Royal Mews at Buckingham Palace. When visiting the Mews at Buckingham Palace back in 2012, I spotted a few royal grooms. They were a quiet, busy looking bunch who moved about the barns wearing their helmets even while handwalking their charges (ironically, in direct contrast to their queen.) They lived above the Mews in friendly-looking apartments, and generally seemed to be a positive, hardworking group. Stopping to allow tourists to pat their horses also was another requirement of the job.

The only downside is that this groom position pays a typical groom’s salary of £20,000, or just $33,000 per year. On the bright side, lodging, in Windsor Castle, is included. Hmmm, groom royal horseflesh per day, sleep in a castle per night? That’s not such a bad trade off! 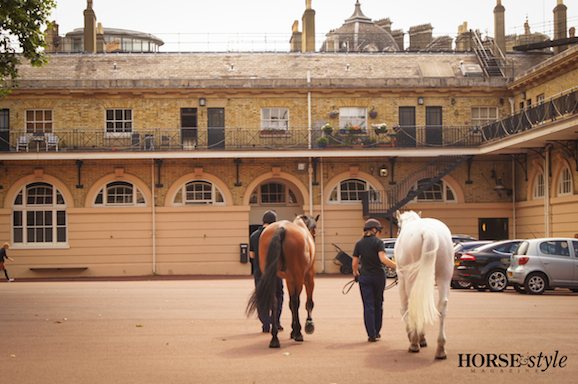