The Story Behind the Strip

“I sat up in bed at 3 in the morning, and I had this idea,” said Blach, a Colorado State University veterinary alumnus and resident of Monument, Colo. “Why hasn’t anyone developed a nasal strip for horses?”

That was 17 years ago. Now, FLAIR Equine Nasal Strips are in horse racing’s limelight as California Chrome preps to storm Belmont Stakes on June 7 as the event favorite. The colt – wearing an adhesive strip – may be the first Triple Crown winner in 36 years, having earlier aced the Kentucky Derby and Preakness Stakes.

The FLAIR strips, which Blach co-invented, have grabbed international attention in part because they were first banned, and then approved on May 19 for use at Belmont Stakes by the New York Racing Association.

Blach said the strips made sense to him and his business partner, Jim Chiapetta, a fellow veterinarian. They wanted to create a strip that would help keep nasal passages open during rigorous equine performance, making breathing easier and relieving stress on the lungs, particularly important because horses breathe only through their nostrils.

But it was an uphill battle.

Blach and Chiapetta had been close friends since they worked together in the mid-1980s at Littleton Equine Medical Center, a clinic near Denver owned by a trio of CSU-trained veterinarians. After his epiphany in 1997, Blach called Chiapetta, who by then had become a patent attorney.

The two developed the product for horses, and then licensed their technology to the company that made Breathe Right strips for humans.

Yet horse trainers and veterinarians were skeptical of the new 4-by-6-inch strips, even after a university study showed they decreased energy consumption and chances of bleeding in the lungs, Blach said.

“We were told we were nuts, that it wouldn’t work for this reason or that,” he recalled.

Their sales pitch fell on deaf ears until just before the 1999 Breeder’s Cup. That’s when the New York Times ran a story about a winning horse that had worn a FLAIR strip; a few high-odds contenders likewise won Breeder’s Cup races while wearing the product.

The tide soon turned on FLAIR Equine Nasal Strips, and Blach himself began to breathe easier.

The drug-free strips have had other critics, but clinical studies have shown they reduce airflow resistance and negative pressure in the lungs. 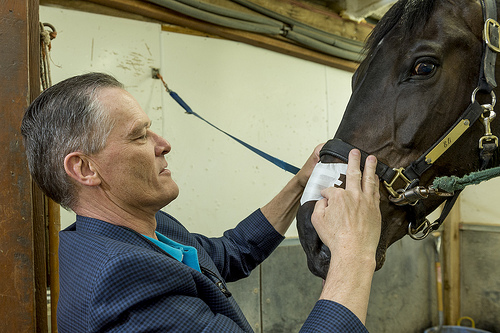 Dr. Wayne McIlwraith, a renowned CSU equine veterinarian who has worked with many race horses, said the strip seems a preferable alternative to drugs that have been used to prevent exercise-induced pulmonary hemorrhage.

“If I was a race-horse trainer with a good horse, I’d use them,” he said. “But there are plenty of people who ignore science.”

Blach graduated with his D.V.M. in 1984 and also earned a master’s degree in equine reproductive physiology at CSU. He practiced as an equine veterinarian in California, but after developing an arthritic condition sought an MBA and started a consulting business in veterinary health.

He credits his professors in the College of Veterinary Medicine and Biomedical Sciences for encouraging his entrepreneurial spirit.

“I had a great time in vet school, with really good people,” he said. “CSU was fabulous. I had really good mentors all the way.”

The Blach family homesteaded on Colorado’s Eastern Plains in 1887 and later formed strong ties to CSU: Multiple family members, from multiple generations, have attended and supported the university.

Blach is chief operating officer for FLAIR, which now makes and sells the strips on its own. He said he’ll closely watch the Belmont Stakes to see if California Chrome wins the first Triple Crown since 1978, wearing the strip he envisioned in the middle of the night.

“There is increased awareness and more willingness to listen to the true health intent of the strip now,” he noted. “We weren’t interested in creating a fad.”