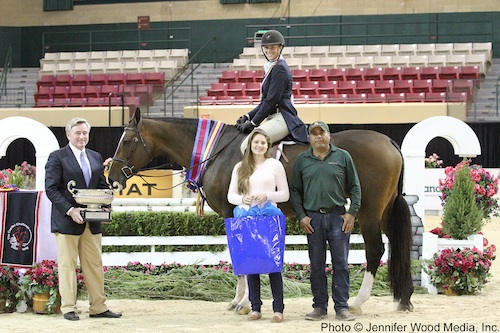 The $25,000 WCHR Pro Challenge had 26 entries, and 12 were called back for the second round. Tara Metzner of Rancho Santa Fe, CA, and Come Monday, an 11-year-old Holsteiner mare by Cassini I, had a great first round with an average score of 89.33, which put them in second place. Metzner stepped it up in the second round, garnering judges’ scores of 91, 88, and 93 for an average of 90.66 and a total of 179.99 for the win. Metzner was presented with the Little Brook Farm Perpetual Trophy, donated by Gary Duffy. 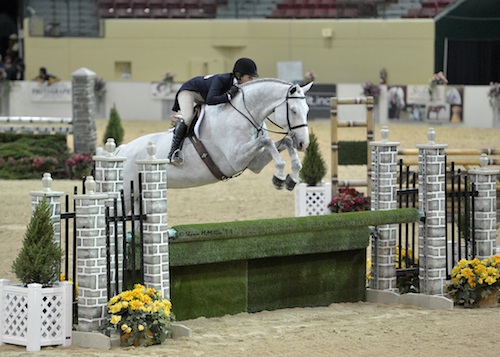 Metzner won the WCHR Developing Pro Challenge in 2011, and she started working for Davlyn Farms in August of 2013. She was elated to have graduated to the Pro Challenge win. “It’s incredible. This year I made it a goal of mine just to qualify and make the top 12,” she said.

She described Come Monday as a horse that knows when it is a big class. “She knew coming back out when it was dark that there was something important going on. When I went to pick up the canter in the opening circle, she all of a sudden shook her head. That was her saying, ‘I’m ready guys!’ It made me a little nervous for a second, but it was just her getting into gear,” she said with a smile.

Metzner wanted to prove how talented Come Monday is on a big stage once again. She explained, “She’s an exceptional horse. I knew if I put in a good round, she’s magical. As long as I get her to the right spot, she’ll always jump the best she can. She sort of excels in classes like this because it’s something new and different. I trusted her that she would jump to the best of her ability. Any time I go in the ring and don’t win on this horse, I feel like I’ve let her down. She’s such a special horse, and I just want to make sure people know that. I was really happy for her that she won it.”

With her victory in the Pro Challenge, Metzner is now the sixth rider qualified to compete in the WCHR Professional Finals on Friday night, along with Scott Stewart, Kelley Farmer, Hunt Tosh, John French, and Sandy Ferrell.
-by Jennifer Wood Media