The championship circuit makes a strategic expansion to the American continent with the first event of season being launched in Miami Beach in April. For the first time ever, Olympic-level equestrian sport will take place on the golden sands of Miami Beach as one of the most vibrant cities in the world celebrates its Centennial.

It can also be announced that Rome will join the stellar line up of destinations on the Longines Global Champions Tour with a landmark event in September. The Eternal City, with a sporting heritage stretching back over two millenia, will provide a thrilling stage as the championship battle heads towards its climax.

2015 will see 15 events across three continents as the FEI-approved Longines Global Champions Tour circuit reaches out to more equestrian fans around the world. Events consistently attract more Olympic, World and Continental Champions than any other show jumping series. The Tour offers over €10million (US $11.8million) in prize money across the season, with a guaranteed €1million (US$1.2million) bonus going to the top 18 riders in the overall championship.

Jan Tops, Founder and President of Longines Global Champions Tour, said: “2015 is set to be a landmark year for our series as we expand to the spectacular destinations of Miami Beach and Rome bringing a new continent and a new capital city into our calendar. I am proud to be celebrating our 10th anniversary in an environment of continued growth for show jumping worldwide as our events become a fantastic sporting and social fixture around the world.” 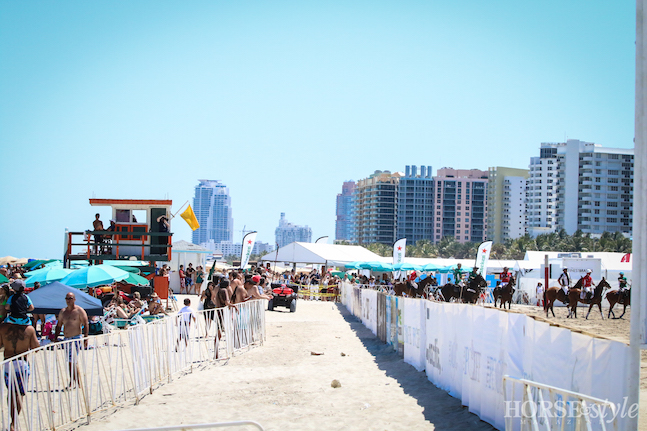 Combining world-class equestrian sport with a glamorous social occasion, Longines Global Champions Tour events attract fans from all over the globe and high profile figures from the worlds of business, entertainment, sport and culture. Taking place in major cities and spectacular venues in Europe, Asia and America, the series is televised live on Eurosport and BeIN Sports all season, as well as on national TV networks and via GCT’s own live streaming channel. 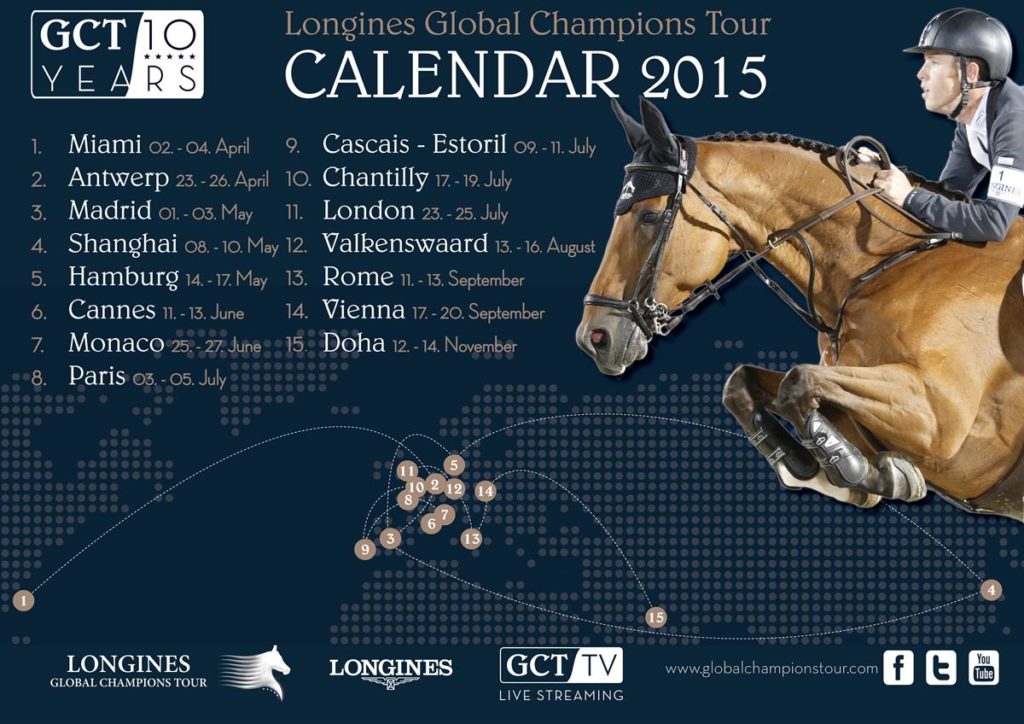 THE 2015 CALENDAR
Miami Beach is the spectacular launch pad for the 10th anniversary season from the 2-4 April. Top equestrian sport joins the calendar of art, fashion and music events that make Miami Beach one of the world’s most exciting destinations today.

The diamond city of Antwerp welcomes the best riders in the world for the second consecutive year from 23-26 April. Antwerp is renowned for its diamond trade, as a major global port and as a rising fashion city. The Tour then moves on to the vibrant Spanish capital city of Madrid and the sophisticated Club de Campo Villa de Madrid from 1-3 May.

Shanghai, China, a new addition to the Tour in 2014, will host the 4th round of the 2015 Championship from 8-10 May. The highest level of show jumping will unfold at the China Pavilion in Shanghai’s World Expo Park where riders will do battle in a dramatic floodlit outdoor arena.

Hamburg, Germany, where the youngest winner of the 2014 season Katrin Eckermann took glory in her home country, will host from the 14-17 May, before we head to the stunning French Riviera and Cannes from the 11-13 June – a popular destination for the chic equestrian crowd. Show jumping’s ‘Formula One’ will then pit-stop in glamorous Monaco (pictured at top) from 25-27 June for the 7th round of the season at the iconic Port Hercule.

Paris, one of the world’s most iconic capital cities, will once again be the extraordinary midway stage of the series from 3-5 July. Five-star show jumping returns to the foot of the world-famous Eiffel Tower in the beautiful surroundings of the Champ de Mars close to the banks of the River Seine.

With the race for the Championship now at full tilt, the Tour moves to the beautiful Portuguese Riviera of Cascais, Estoril from 9-11 July for the 9th round. Chic and sophisticated Chantilly, from 17-19 July, offers spectacular views of the legendary Chateau and delivers a great weekend of top equestrian sport for the 10th round of the season.

From 23-25 July, London will be centre stage. Will we see another home win for the British on home turf in 2015? The stunning new development at Valkenswaard, home of the Tour, will be an impressive stage for the 10th anniversary year from 13-16 August.

The Eternal City will host the elite of the world of show jumping in a stunning new event for 2015. Rome, Italy, from the 11-13 September, offers a fantastic stage for the 13th round of the season with its magnificent architecture and ancient monuments.

Historic Vienna, Austria (17-20 September), overlooked by the famous Rathaus, is sure to be hotly-contested as riders jostle for ranking points before the final leg. The state-of-the-art Al Shaqab in Qatar’s capital, Doha, will for the third year running host the Championship finale. From 12-14 November this grand stage, part of the renowned Qatar Foundation, will witness the run up to an explosive finale for 2015.