The Hap Chronicles: Taking It in Stride

So, what makes Hap Hansen different? “Well, he concentrates on everything he does while he is doing it,” his older sister Joann Fender says. “ He’s a deep thinker. He thinks about what he’s going to say before he says it. For example, if you are talking to Hap on the phone, he will pause before he speaks. It’s not because he doesn’t have anything to say. It’s because he is thinking, deciding what’s important to say to you. His ability to focus is a gift.”

Hap has learned to take pain in stride too. In 1987, his tenacious father contracted ALS. “Dad had always been sharp,” Joann said. “One day we noticed that he could not lift his foot over the chain at the end of the driveway, and we knew something was wrong.” But neither vanity nor physical difficulty would stop Ralph from rooting for his son.

When Hap competed in the 1987 FEI World Cup Finals in Paris, France, Ralph Sr. was there, whistling for Hap from his wheelchair while Hap’s mother Evelene jumped up and down beside him. Sadly, Ralph Sr. passed away just six months later. Hap was working a horse in Harrisburg, Pennsylvania when he heard the news.

Spirituality isn’t always limited within the walls of a church. When Hap made the decision to stop drinking, he found that he was ready to turn his will over to a power that is greater than himself. Now sober for almost two decades, he attends a men’s AA meeting at least once a week, and helps fellow pilots who struggle with the disease to stay sober.

“When I was little, we went to the Presbyterian Church,” Hap said. “ But I really haven’t been in awhile.” Rider Lucy Stewart described Hap as “a Zen master,” but he said, “I’ve never studied Buddhism.”

Fellow horseman will all vouch for his character and ability. Successful amateur rider Julie Hancock, a longtime student of Hap’s, says, “I don’t think ‘ego’ is in his vocabulary. If he wanted to notch another Grand Prix win to make his 100th, he could go to any number of smaller shows and make it happen. But that isn’t his way. If he can’t win on his terms, and against all of the best, then he doesn’t want it. I respect that about him so much. It seems as if ‘100 wins’ is a goal that other people have set for him. It has never been his goal. He just likes competing, but puts the welfare of his horse (and not his ego) first and foremost.”

The reverence that Hap has for the sport is always apparent. Hancock continues, “Hap is humble, respects his fellow competitors, is truly happy for other people’s success, never boasts about his victories, and never speaks badly about his peers. He is the same whether he wins or loses, but he definitely loves winning.”

Grand prix rider Kristin Hardin rode with Hap as a junior, and says that, “what sets Hap apart from other trainers is that he has such honesty, and no greed.” She added, “Hap is intolerant of dishonesty and mistreatment of any type of animal. If he discovers that in a fellow trainer, he will simply never deal with that person again – ever.” She described Hap’s eyes as “crisp, sky blue, ice blue, so clear, so present,” and explained that for her, he was “a different kind of trainer to have. He didn’t say much. He wanted me to think, and to feel. His advice was minimal on purpose. He loved the horses and didn’t want to get in the way of what they felt.”

It doesn’t matter what type of horse Hap is riding; they all look and act more comfortable when he is on their back. Hap teaches his students to take everything in stride. Hannah Ellerbock, one of his former junior riders remembers, “when I first started with him, I was a perfectionist and my desire for perfection caused me to get very nervous before each round. In four years of teaching, he transformed me from a nervous, anxious rider to someone who is calm and who goes with the flow. And this taught me to take things in stride, not only in my riding, but also in my life.” 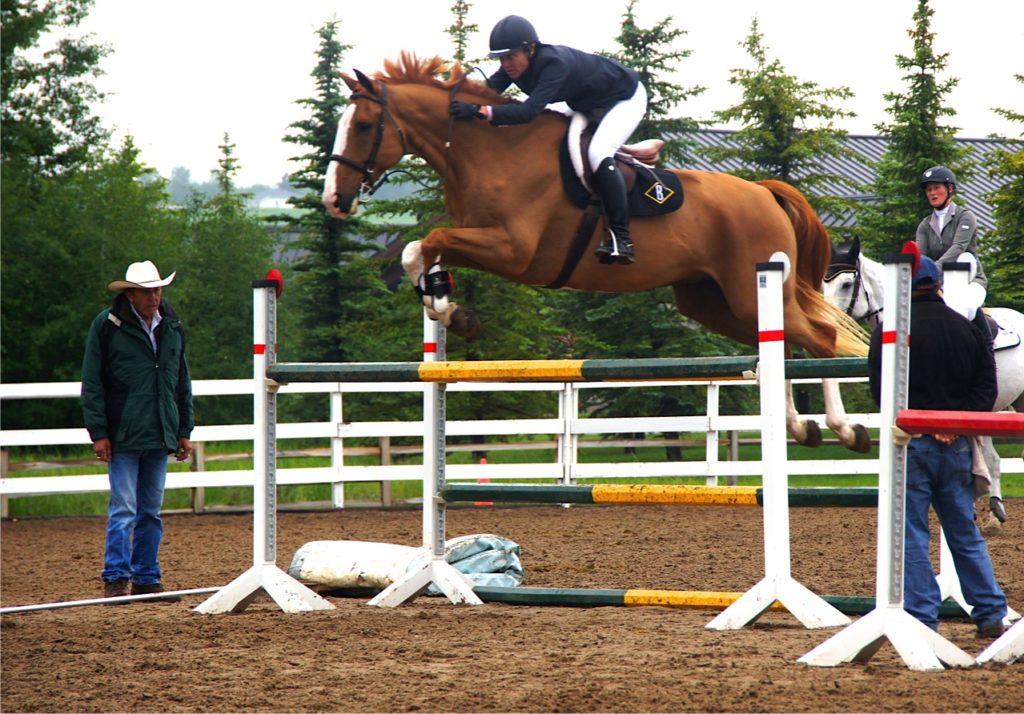 The author warms up at Spruce Meadows under Hap’s eye

While Hancock said, “his hands are so soft and his empathy and love for the horse so apparent,” Hardin added, “ he has a feel and a softness that makes horses better than they are.” Ellerbock wrote, “the extra bit that Hap gets out of the horses while keeping them happy and excited about their jobs is incredible.”