“We Give Horses Wings” – Vegas Horse Party Takes To the Air

A hugely valuable cargo was loaded onto the Qatar Airways B777 chartered freighter aircraft departing Schiphol Airport in The Netherlands at 05.55 CEST today (Saturday 11 April). “We estimate there’s about €150 million worth of horses on the flight,” says Tim Dutta, the man in charge of transporting many of the world’s elite equine athletes from Europe all to the way to Las Vegas, USA for the FEI World Cup™ 2015 Finals (15-19 April).

“Horses are just like you and me,” says the man whose company banner reads We give horses wings. “Some fall asleep before departure and snooze most of the way, and others start praying from the minute they take off and don’t stop until they’ve landed! But the majority of them are like seasoned CEOs, they’ve flown so many times that they just take it all in their stride.”

Established
Dutta has been in the horse transportation business since the Dutta Corporation was established in 1988. “Over 26-plus years it has grown into a global venture, flying 5,000 horses a year, most of them sport-horses,” he explains. “We are the largest player in the US and we transported horses for the Pan American Games in Guadalajara and for the World Equestrian Games in Kentucky where we worked with Martin Atock from Pedens in the single biggest air transportation of horses ever.

“There’s a group of companies involved in air transportation of horses, and we work well together. We are all horseman first – this job needs to be done by horsemen, and all our staff are also experienced horse people,” he points out. 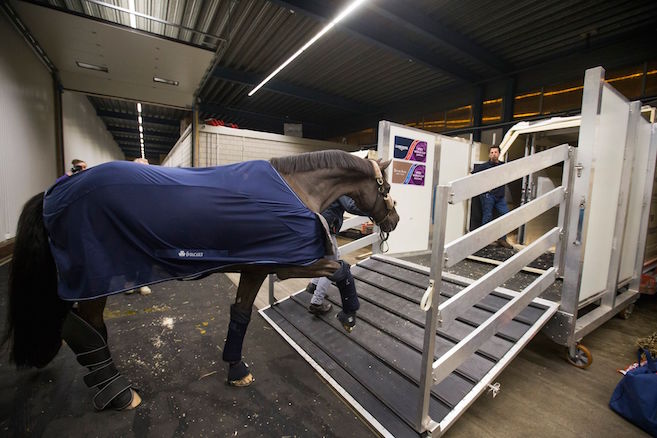 Supervision and comfort
There were a total of 40 horses on the flight departing from Schiphol, and they were looked after by a team of 10 grooms, under the supervision of world-famous Dutch veterinarian Jan-Hein Swagemakers who works with the German Jumping team. “Jan-Hein is very experienced. He’s been to Hong Kong, Kentucky and many of the Global Champions Tour events and he supervises the health and well-being of all the equine passengers with the help of grooms from Germany, The Netherlands, Switzerland, France, Ireland and Russia. These are grooms who work for riders who will compete in Las Vegas, and there is also one further groom who works for me and whose job is to be Jan-Hein’s assistant,” Dutta says.

Each horse is allocated “a stall and a half”, which is a generous amount of space in the cargo hold, “and we like to keep them together by country. There are two horses per box and it’s a business-class service. We pay attention to each horse’s little idiosyncrasies and requirements – do they like wet hay, or not? Do we use sea salt to encourage them to drink?

“I like them all to have a haynet so they can at least pick at it during the flight and have something in their belly. Some grooms like to feed them a bran mash mid-flight, but others don’t eat much at all. I like to give them carrots. Horses see them as a treat and associate them with feeling good and being rewarded so it helps them to settle. The grooms are there to help them with their comfort and safety, but I like the horses to have some quiet time too, they need that. So when the aircraft is at cruise then they are left alone for a while, to have a snooze and relax, without being bothered by anyone. If the weather disimproves, the grooms go back to them right away.”

The company that carries the top equine athletes from Amsterdam to Las Vegas 8,564km (5,333 miles) away is Qatar Airways. “Qatar Airways Cargo is proud to transport some of the world’s most admired horses,” Ulrich Ogiermann, Qatar Airways Chief Officer Cargo says. “We have a wealth of experience transporting star-performing horses around the world, and strive to provide our equine travellers with the same five-star experience as our human passengers, even offering a five-star horse hotel in our home base Doha. 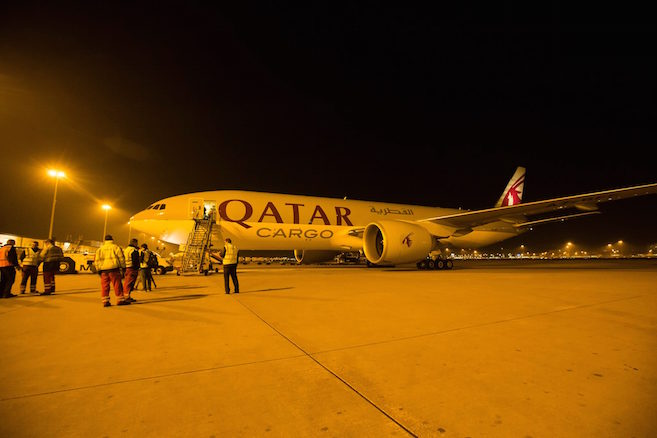 “On board the freighter we provide first-class jet stalls and dedicated product management and support, so the horses are experiencing Qatar Airways’ globally renowned hospitality and comfort.”

“Their equipment has to be scanned for security and then clear customs, and with around 25,000lbs (almost 12,000kg) of gear – tack, blankets, boots etc – a total of 11 pallets were loaded on the flight as well,” Tim Dutta explains.

The horses get a health-check and, just like their human counterparts, are identified by their passport before boarding. If a horse shows any indication of distress, colic or signs of fever, it is not allowed on board. “Animal welfare comes first, and if there is anything wrong with a horse, the ultimate decision about whether it will be permitted to travel lies with Dr. Swagemakers. Fortunately today all the horses were in top form and were allowed to board without a problem.” 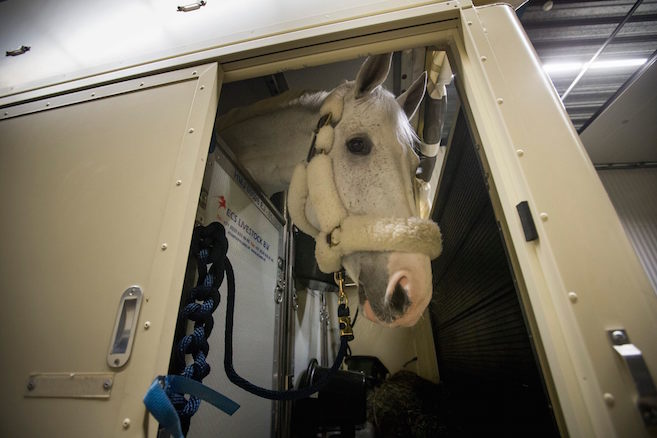 Each section of stalls is weighed to get the balance right for the flight. “Most of the time two horses weigh much the same, but sometimes the Dressage horses can be up to 100 kilos heavier than the jumpers.”

On landing there will be another ID check, passports will be examined and bloods taken and sent off to a laboratory in Iowa for testing for diseases, including Glanders and Equine Infectious Anaemia (EIA). Once that’s completed the horses de-plane and will be transported to the stabling area at the Thomas & Mack Arena in Las Vegas where they will go into quarantine until the test results come back from the lab 42 hours later.

Passenger list
The passenger list for flight QR 8197 reads like a “who’s who” of the sports of Jumping and Dressage. Defending Longines FEI World Cup™ Jumping champion, Daniel Deusser’s Cornet D’Amour, was delighted to be sharing a flying stable with Marco Kutscher’s Cornet’s Cristallo, whom he knows so well. He was also hoping for a chat with Marcus Ehning’s Singular La Silla. Cornet D’Amour wanted to fill his mates in on what he’s been up to lately, and give them a few hints about how to handle the small arena in Las Vegas. No doubt he’s been studying videos of previous Finals at the Thomas & Mack and has a few ideas up his sleeve about how to bring that coveted trophy back to Germany again this year. Singular La Silla however appreciates travelling in peace and was one of only two horses not sharing a stall. The other loner was Dutch rider Jur Vrieling’s stallion VDL Zirocco Blue.

Tim Dutta says he wonders if the horses might like to get in the mood with Elvis music playing in the background while they’re in the air but this early in the morning they were not all fans. However the arrival in Las Vegas of Charlotte Dujardin’s Valegro, the Dressage world-record breaker who has claimed every possible accolade, including the Reem Acra FEI World Cup™ Dressage title for his British rider, is likely to create as much excitement as the return of The King himself. 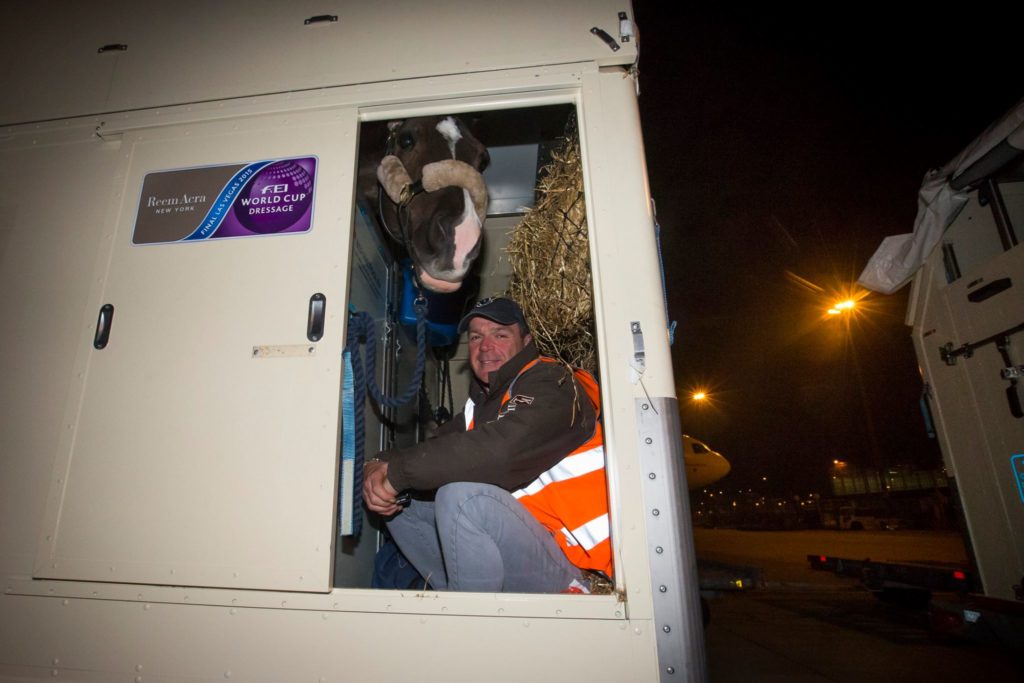 Passport
Full ID, places travelled to and up to date with all required vaccinations etc.