“My Cornet is very special, but I love him!” says 25-year-old owner Mavis Spencer, paying tribute to famous sire Cornet Obolensky. Her ‘Cornet’ is Cornetiero: born of a champion, the gorgeous bay carries himself with all the confidence, skill, and personality that is his birthright. 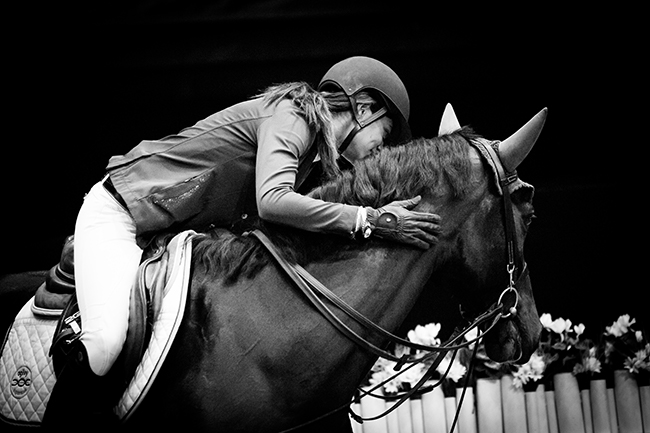 Spencer and Cornetiero began forging a connection when Italian show jumper Lorenzo de Luca was riding him. Both Spencer and de Luca were working with Neil Jones Equestrian, in Belgium. Spencer was grooming for de Luca, and Cornetiero was then an 8-year-old. In the spring of 2014, they took him to two shows in Austria, and to a five-star in Rome, and Spencer rode him occasionally during that summer. In December 2014, she brought him to Wellington with the Neil Jones America horses, planning to find a top rider for him so that he could do the bigger classes. 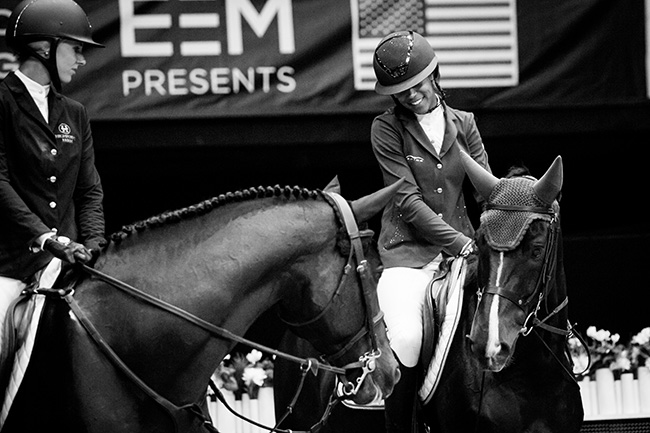 But Jones had other ideas; Spencer had sold her horse, and he wanted her to have Cornetiero to ride. They did the Wellington Equestrian Festival (WEF) of 2014–2015, and then went on to jump clear rounds at some of the top European venues in the summer of 2015.

When Spencer returned to Wellington in December of 2015, Cornetiero stayed in Europe with Katharina Offel and Sofia Westborg, who showed him for a couple of months in the winter of 2016. Ultimately he wasn’t well suited for them, and in June Spencer got a call, asking her if she wanted him back. Her response was without hesitation. “He came back on July 4th, and now he has a forever home,” she declares happily. They went on to best a field of 27 at the Kentucky Summer Classic, winning the 1.40m Open Jumpers; picking up top placings in national grand prix classes; and by fall making their debut in the Longines FEI World Cup™ Qualifiers. This year at WEF, Spencer tacked up Cornetiero for their Saturday Night Lights grand prix debut on January 22nd, and to her delight, the pair placed 8th in the $86,000 Marshall & Sterling GP. That was the first of many successful Saturday night appearances for the pair.

Spencer says that she never worries about Cornetiero’s clearing the course. “He’s a super horse – very brave, with all of the scope,” she says. “He doesn’t get nervous in the show ring, and that makes me feel calm and confident. I haven’t yet found a venue where he wasn’t focused on his job, and that’s great for me that he’s always fairly consistent, no matter the venue.”

Like his father, he has a lot of character, Spencer says. “The biggest thing is that you have to compromise, and know that at the end of the day, he will do what he wants. He’s very willful; he likes to be the first horse fed in the morning, and the first one out of the stall. If he wants to come in, he will bang on the paddock gate until you come to get him. You have to do things on his terms.”

He goes by the unlikely barn name of Mouse, often times Mighty Mouse. “There was a Finnish girl who worked with him in the early days, and she called him something in Finnish that sounded like ‘mouse,’ so it stuck.”

In the warm-up arena and the show ring, you can’t miss him, says Spencer. “He goes in a hackamore, with his head in the air, and he usually has fluff all over him, from the fuzzies on his shadow roll, and his fuzzy boots. He’s very spoiled; I like to bubble-wrap him!” 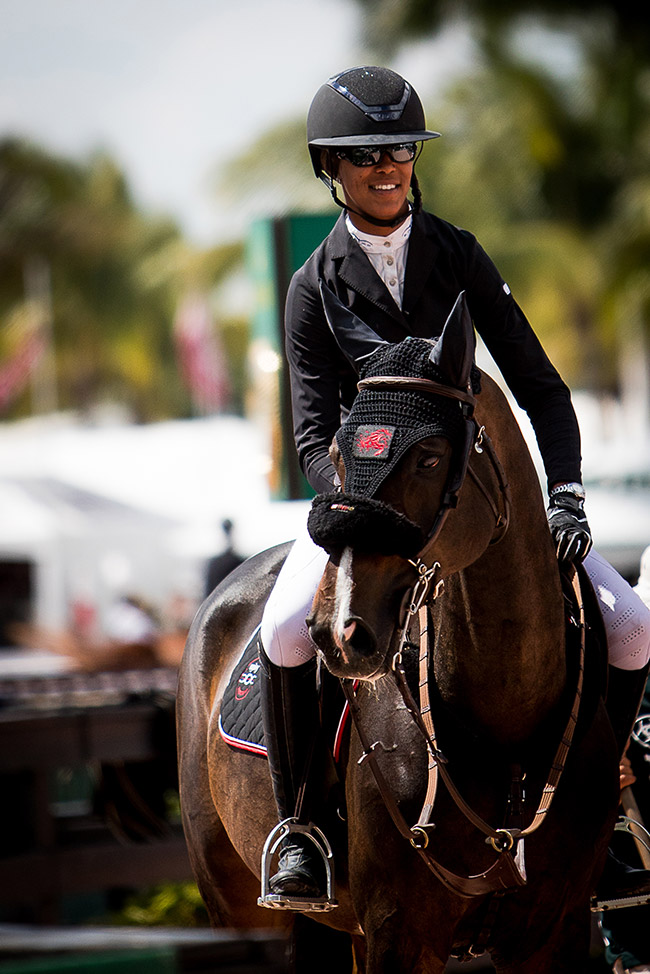 The hackamore was quite a breakthrough for Cornetiero. He hated having a bit in his mouth, and seemed to fight it. When Spencer was working with Laura Kraut and Nick Skelton in England, they noticed that he focused too much on what was in his mouth, and suggested that he might be happier in a hackamore. As soon as they tried it, Cornetiero relaxed, and the rest is history.

After a successful season in Wellington this winter, Neil Jones Equestrian, which includes Spencer and her Gallop Apace, LLC, will head to Kentucky to do the 3* competitions in May. Cornetiero enjoys his time in Kentucky, because he can be outside all night. “Sometimes in the mornings, he doesn’t want to come in, and doesn’t want to go to work, which is his call,” says his partner. “I know that I need to keep him happy and mentally occupied, but he doesn’t need to train, really. If he gets too fit, he gets willful, so I just work on keeping him happy.”

About twenty horses-in-training will travel to Kentucky, including a selection of Neil Jones Equestrian sale horses and Spencer’s Gallop Apace, LLC’s horses. Fortunately, Spencer and her team are no strangers to long days leading into nights! In a schedule similar to last year, next season some of the horses will go to California, meaning Cornetiero will have a little East Coast time, and a little West Coast time through the summer; and then once again all the horses in California will gather in one place come fall, before returning to Wellington for WEF 2017–2018.

Both parties seem pleased with the partnership, and although the location and the time zone may change, they have achieved a balance both in and out of the show arena. “We’re a bit of here, there, and everywhere – kind of a traveling circus,” she says cheerfully, and adds, “He seriously vexes me sometimes, but he is my child. Honestly, I could go on for hours when it comes to this creature!”

When asked about her plans going forward with Cornetiero, she tells us, “He’s better, the bigger the classes. If the course is too easy for him, it doesn’t hold his concentration. So he’ll have a short break, and then do the three 3* classes in Kentucky. I’m aiming him at the World Cup™ shows in the fall.”

This article was originally published in our May/June 2017 issue. Read the full issue online here!