Timing is everything. For Cathleen Driscoll, timing was the constant theme of her journey to winning the 2018 Lindsay Maxwell Charitable Fund/United States Hunter Jumper Association Emerging Athletes Program (EAP).

“Participating in the EAP almost didn’t happen for me,” noted the self-taught 25-year-old rider. “I remember when they rolled out the program. I thought it was a really good idea.”

The only problem? She didn’t have a horse capable of participating, lacked the connections to help her get a horse to take part in the EAP, and was stuck on the sidelines.

But this year things turned around. Driscoll had the mount and, with the age increase to 25, it looked like the stars were aligning for her to participate in the 10th anniversary of the EAP.

“I finally felt like I actually was in a situation where I had a horse I could take; and I was ready,” Driscoll said. She was. And so was Enzo, a nine-year-old Dutch gelding that has been her partner for just over a year.

When she wasn’t working as a groom, Driscoll and Enzo trained tirelessly at Driscoll’s parents’ farm in Elk Mills, Maryland, while also fitting in about a dozen competitions a year in order to learn and improve along the way.

“Everything I do I have to be selective. I only show a few times a year, I’m not in the spotlight, I don’t have a bunch of horses, and people don’t know my name,” Driscoll said. “I have one horse, and one shot.”

Topping out at the age limit, one shot was all she had for her final round piloting a randomly selected mount during the finals in November. And she did it in partnership with the University of Findlay’s own Escada, a feisty 15.3h Hanoverian grey mare that Driscoll had met only days before.

“Sponsoring this life-changing program is truly an honor,” Lindsay Maxwell Charitable Fund Executive Director Bill Rube said. “Part of the Fund’s mission is to help future generations of horseman have access to the wonderful resources of our sport, and to help foster horsemanship. We couldn’t be more thrilled that Cathleen came in first place.” 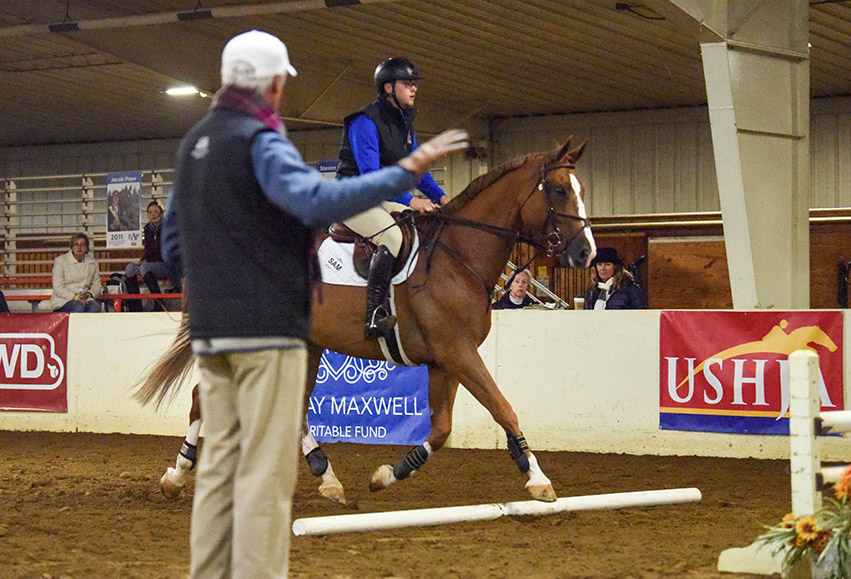 Building on the Basics: Horsemanship

“The way this program is designed is an interesting concept. Once you get there, you’re on your own. You’re taking care of your horse on your own the whole week. You’re 100 percent responsible,” remarked Driscoll. “It was a little bit of a familiar experience for me; I’m used to taking care of my horses anyway … This program highlights that. It shines a light on how important the horsemanship aspect is.”

For Driscoll, horsemanship started when she turned five years old and began riding at a local barn until she was 12 years old, when she worked with a different trainer and then competed at small rated shows for the next few years.

At 16 years old, she brought her horse home and started looking for another trainer. Months would go by, and though it was unexpected, Driscoll became her own trainer, watching videos online, attending the occasional clinic and pushing herself.

“I never expected to stay on my own,” she said. “It just happened. I became my own best critic, pushed myself in a way trainers weren’t, and saw improvement in my riding.”

While working without a trainer can be daunting, Driscoll held out hope that one day, her hard work would be recognized.

“Ninety percent of people board their horses at a barn with their trainer. That’s the normal way to go. They have a trainer, the trainer has a barn, the client puts the horse at the barn, and the trainer is involved in all the oversight of that horse,” Driscoll said. “I think this program really highlights that and it takes you back to the basics a little bit, just knowing what your horse eats: What do you feed it? What kind of grain does it get? What kind of hay does it get? Why does it get that?”

EAP emphasizes the core basics of horsemanship, which also informs the clinic layout. The first part of the program revolves around regional clinics, where riders spend five days learning on and off their horses, riding, training and learning how to care for their horses.

“It was a lot of information to absorb in a short amount of time,” Driscoll noted. “I really think I learned a lot over the five days.”

Learning at an accelerated pace was part of what drew her to the program. The focus on the whole athlete, learning in the ring and out, learning to care for your own horse and understanding the principles of horsemanship are emphasized, as they should be.

“I was holding my breath after the regional clinic,” Driscoll confided. “I was happy with my performance, but it wasn’t perfect.”

She hoped to be included in the list of riders who would advance to the national session – only the top 16 would – and was elated when she found out the news.

“It was exciting,” said Driscoll. “Being self-trained, I don’t always have a lot of opportunities to ride with these better instructors. In this program, they really try to bring in good instructors.”

Those evaluating riders at the regional level – Driscoll participated in Virginia – saw how her hard work was paying off, and she advanced to the National Training Session, which was hosted by the University of Findlay from November 8th to 11th in Findlay, Ohio.

For the national session, Olympic Gold Medalist Joe Fargis served as the lead riding clinician. In true Joe Fargis fashion, he offered thoughtful advice and feedback, such as: “Make your practice as perfect as you can make it;” “Mistakes happen all the time, all day long. You can’t let them interfere with your thoughts;” “Every gait has a rhythm. Life has a rhythm. Just find it.” and “A good teacher makes themselves useless.” 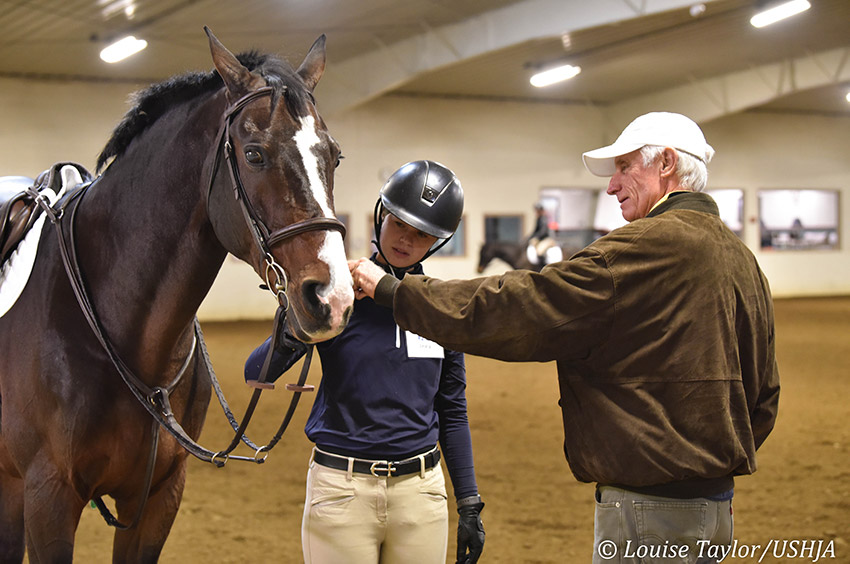 For the EAP finalists, it came down to how perfect they had made their practice. At the conclusion of the session, finalists are not only evaluated on their progress, but also on riding an unfamiliar horse in a Nations Cup-style competition. The 16 finalists rode two rounds on the final course, which was designed by Anthony D’Ambrosio.

Driscoll and Escada soared through and finished with two clean rounds.

When four other outstanding finalists – Maura Cherny, Katie Pelzel, Alicia Weismann and Kiersti Wylie – were called back for a third round, Driscoll thought she hadn’t made it.

As overall winner, Driscoll also received a $3,000 grant for educational training, a pair of Parlanti International tall boots, and a trophy.

“Without this, attending the clinic would not be feasible this year,” noted Driscoll. “And my boots are on their last leg.”

Driscoll is looking forward to finding a trainer to help her as she embarks on training for the 1.4m division.

“I think what this program afforded me more than anything else is the opportunity to open some doors,” she said. “There are some really great people behind this clinic. Mary Babick, the president of the USHJA; Sally Ike, one of the clinicians; Joe Fargis, an Olympic gold medalist . . . it was really the opportunity to go in front of these great people and say, ‘This is me. Here I am, this is what I can do,’ and have the program open up these doors. I am ready for more, I would like to do more and continue in my training. I’m really hoping with this grant money I can get myself into a good situation, get a trainer and progress further in the sport.”

Because of the Lindsay Maxwell Charitable Fund/USHJA Emerging Athletes Program, Driscoll has the opportunity to further her riding and get a step closer to her long-term goals and aspirations of competing at the grand prix level – and someday representing the United States in the international arena.

“I’m really grateful for the Lindsay Maxwell Charitable Fund and all the other sponsors of this program, and the University of Findlay for generously letting us use their facility and lending us their horses for the week,” commented Driscoll. “It’s a really great program. It really does recognize talent at the grassroots level and it helps recognize riders that otherwise might not have the funds or the resources to be able to be recognized and succeed in the sport.”

Now that she has won the EAP, people will know the name Cathleen Driscoll!

Awards sponsors included Charles Owen, Inc; CWD; Parlanti International; Professional’s Choice; and Shapley’s. The program is also supported, in part, by a grant from US Equestrian and individual donors through the USHJA Foundation.