If you are an avid Horse & Style reader, you may have read of my 2018 trip to Rabat, Morocco, to attend the wonderful Morocco Royal Tour (MRT) for the first time, in our Spring ‘19 Issue. Last October, I eagerly returned to Morocco – this time to Tétouan – to catch the first stop on the 2019 Tour.

One of the northernmost cities in Morocco, Tétouan is one of two major ports of Morocco on the Mediterranean Sea and lies along the Martil Valley just a few miles south of the Strait of Gibraltar. Having been to Rabat the previous year, a bustling city and the capital of Morocco, I was excited to visit a different region in the country I have begun to know and love. Bringing along my trusty travel buddy, my mother Terri Roberson, we set out on the 36-hour door-to-door excursion to Tétouan.

Take Me to Tétouan

Waking up to a view of the ocean was the perfect way to start round two of my Moroccan experience. Located quite a bit further north than more frequented cities, such as Casablanca and Marrakech, spending time in Tétouan felt like a real cultural immersion, and each person we met was kind and welcoming. Tétouan does not get many American tourists, and in fact, the entire time I was there, besides my mother and me, we did not come across any other Americans. The food in Tétouan is incredible! With a bit of Spanish influence melded into the local flavors, every meal was an experience in itself. I learned that on Fridays in Tétouan it is traditional to eat couscous – a custom I definitely decided to start implementing at home in the States.

The first stop on the MRT is set on the grounds of the La Garde Royale de Tétouan. As we traveled by shuttle from the airport to the show grounds, winding through the streets of Tétouan, I couldn’t imagine where the 4* horse show facility could possibly be located. Then, just as we rounded a corner, barely making the turn, La Garde Royale de Tétouan appeared almost as if it were a mirage. Two large gates set on each side of the property are the only access in to the facility. The arena has open public grandstands on one long side and a royal building on the other, reserved for the royal family and their guests to sit. On the short side of the arena sits the in-gate as well as a riders’ lounge, where you can find riders socializing, watching the class and enjoying my personal favorite: Moroccan mint tea! 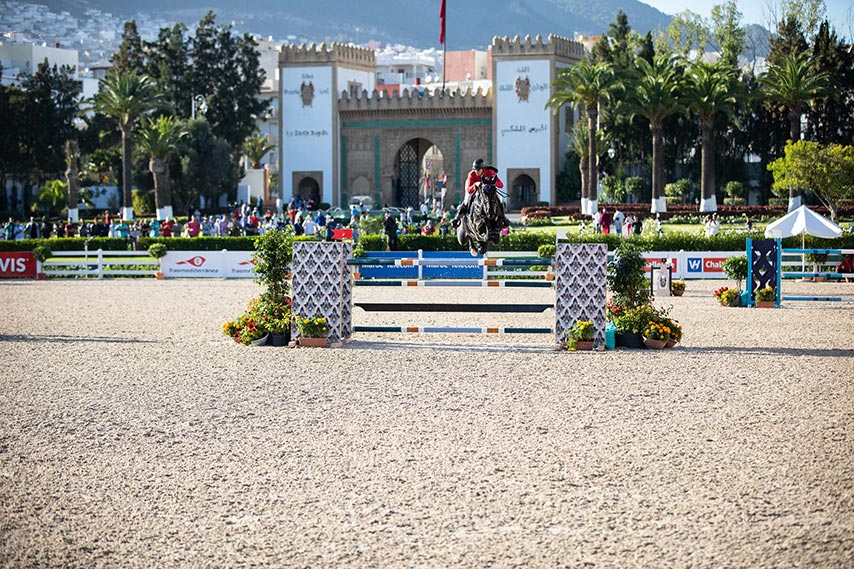 Meet Me in Morocco

The lineup of riders for the 4* was quite impressive: Canadian rider Tiffany Foster, Irish rider Billy Twomey and local hero and Moroccan legend Abdelkebir Ouaddar, just to name a few. Every day was full of exciting show jumping, and on the final day, it was French rider Olivier Perreau and his mount GL Events Veniza d’Aiguilly who took the win in the CSI4*-W Grand Prix. He jumped for the win with a full house of packed stands and cheering spectators. During the prize giving ceremony, local fans lined the arena to get a better view of the top placing pairs. After Perreau’s win he was whisked away to meet with the royal family and their guests and was asked to cut and eat the first piece of specialty cake made for the occasion. After a day like that, it was fair to say Perreau was having his cake and eating it too! 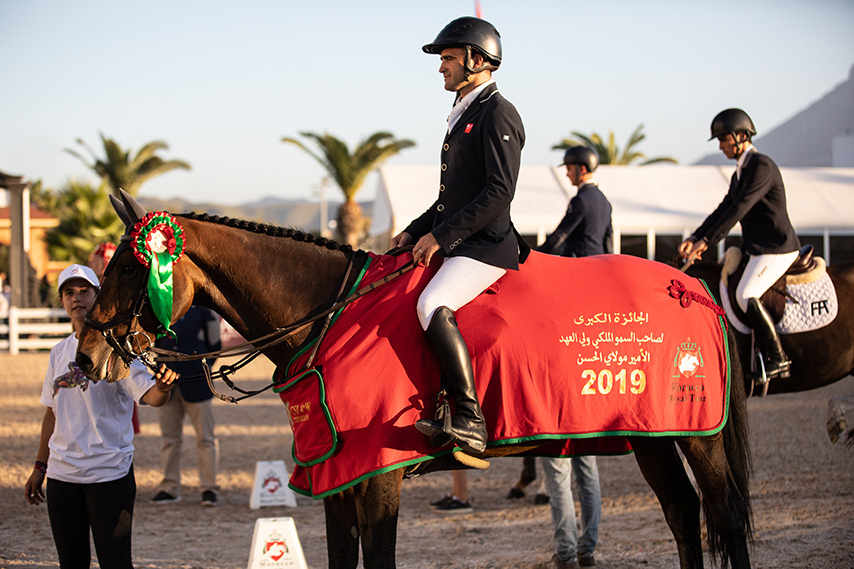 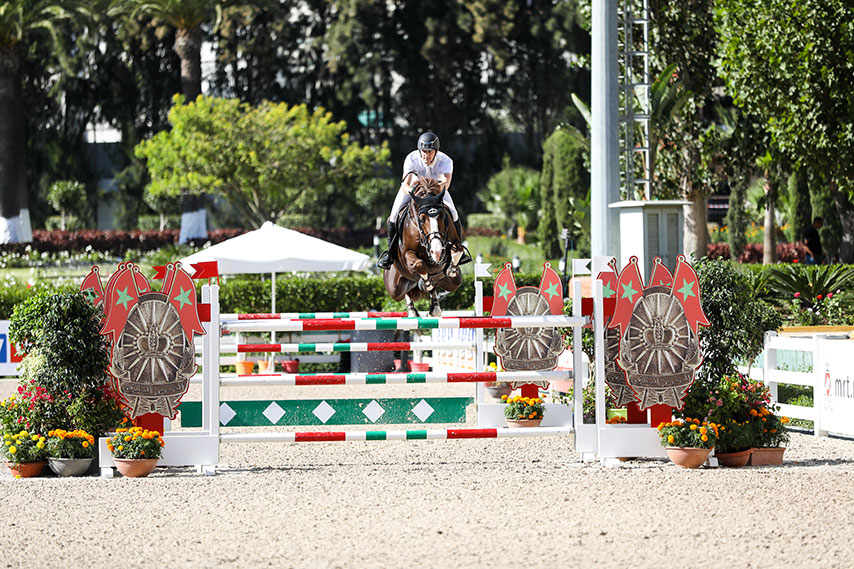 It’s no secret, if you’ve read any of my previous travel articles, after show jumping and sightseeing, my favorite thing to do while traveling internationally is shop. I’ve been known to squeeze oversized tea trays from Doha and stuff as many poufs from Rabat as could possibly fit in my luggage. Once again, I embarked on a mission to the Medina. And this particular Medina is not one to miss. Centuries old and little changed over the years, the Medina of Tétouan is recognized as a UNESCO World Heritage Site. 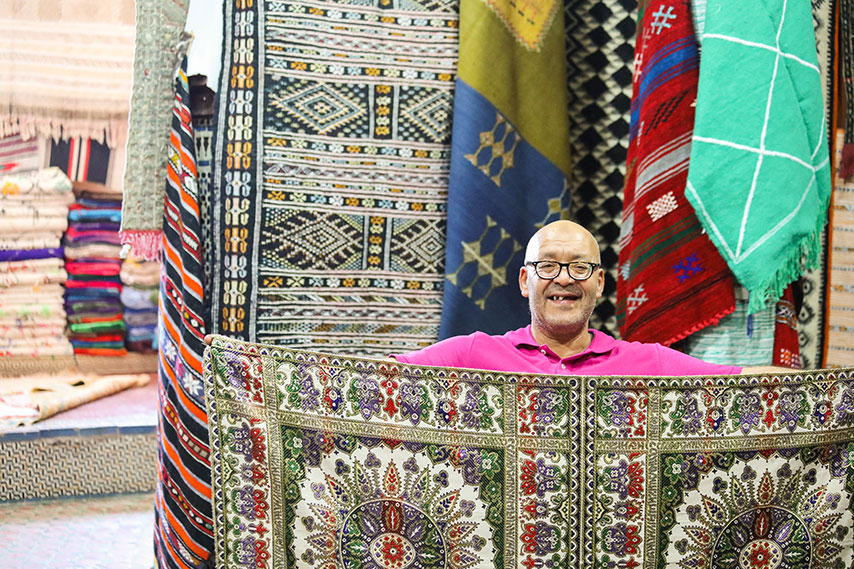 Ahmed and his gorgeous Moroccan rugs at the Medina, photo © Sarah Appel

This year while shopping I couldn’t get enough rugs. And why would I buy anything else? As I meandered through the fish, pigs feet and live chickens, I finally found my way to where I was meant to be: with Ahmed, a proud shop owner who sells his rugs all over the world. Of course I believed him, but just in case I needed more proof, he proudly showed me his book full of package slips which indeed were sent all over the world. After tea and some time spent on his roof top, from which we had 360° views of all of Tétouan, we got down to business. Ahmed and another gentleman who worked in his shop pulled out rugs and blankets in every color, shape and style. We lined the floor with options and optimistically rolled up what I thought I could carry back in my luggage. It was of course too much, yet at the same time I wish I had bought more, but just another reason to go back to Tétouan.

As my time in Tétouan came to an end, history was about to be made the following week in Rabat. With the Olympic teams forming for the 2020 Games in Tokyo, suddenly all eyes were on the second stop on the MRT and their Nations Cup™ competition.  A fairytale ending secured the Egyptian team, comprised of Mohamed Taher Zeyada, Nayel Nassar, Abdel Said and Sameh El Dahan, one of two remaining spots for Tokyo. The last time an Egyptian showjumping team competed at an Olympic Games was 60 years ago, in Rome in 1960. I know that, along with me, everyone from the MRT will be cheering on the Egyptian team, knowing history was made on Moroccan soil.

Luckily for me, there is still one more stop left on the Morocco Royal Tour that I have yet to visit: El Jadida. I look forward to visiting next year and experiencing a whole new area of Morocco. Until then, I will dream about which treasures may be waiting for me in a medina somewhere in El Jadida.