After rounding off 2019 with consecutive Longines FEI Jumping World Cup™ qualifier wins in Thermal, CA and Las Vegas, NV aboard her new super-star mount Benny’s Legacy, and with her wildly talented – and undoubtedly world-famous – mare Cristalline’s return to competition, 2020 holds a great deal of promise for 27-year-old international show jumper and Greenwich, CT native Adrienne Sternlicht. Though these are still early days in her international riding career, Sternlicht is no stranger to notable success; 2018 also marked a standout year. Competing on the NetJets® U.S. Jumping Team at the 2018 FEI World Equestrian Games™ (WEG) in Tryon, NC alongside her mentor McLain Ward, and longtime idols Laura Kraut and Devin Ryan, Sternlicht’s scores helped the U.S. secure the show jumping team gold medal for the first time in 32 years.

Horse & Style had the pleasure of catching up with Sternlicht during the few quiet holiday weeks before the start of the winter season to learn more about how she got her start in riding, her current string of horses, and her next big goals – both within and outside the equestrian world.

Horse & Style: How old were you when you began riding and how did you get your start? Were horses always in your family?

Adrienne Sternlicht: I began riding at age six. I was at my best friend’s house for a playdate, sat on a horse in her backyard and refused to get off! After that, I started taking lessons at a local barn. My family was, and still is, entirely uninvolved in horses! My parents are very supportive but neither of them ride or have a personal investment in the sport outside of my own career. 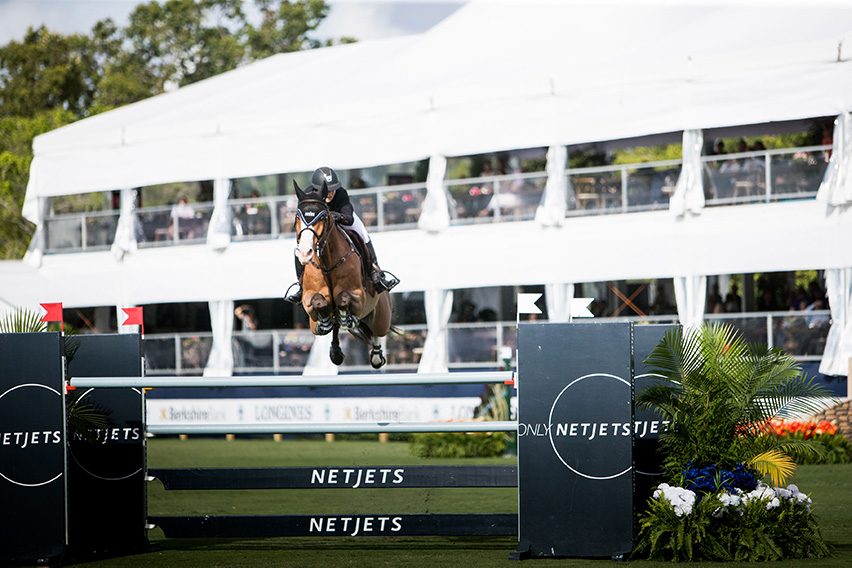 H&S: Who were some of the people who influenced you as a young rider? Any idols?

AS: As a young rider, I was most influenced by Patricia Griffith and Linda Langmeier. I rode at Heritage Farm when I was just beginning to compete, and they gave me an incredible foundation. Linda has been a very important person in both my life and my riding career, as I started training with her when I went to boarding school. Growing up, I knew nearly nothing about international showjumping so I idolized the few American riders I did know of: McLain Ward, Kent Farrington, Beezie Madden and Laura Kraut!

H&S: What do you love and enjoy most about the show jumping sport?

AS: The horses! There’s nothing quite like the connection between horse and rider, and I think I’ve come to realize that, especially having spent little time in the saddle as a junior.

H&S: 2016 seems to have been a particularly formative year in your career as you began your partnership with Cristalline and started working with McLain Ward. Could you tell us more about that time?

AS: In 2016, I graduated from Brown University, so that is when I began riding full-time! McLain had begun helping me in the winter of 2016, but was very clear upfront that he couldn’t commit to me as a full-time student until after the Rio Olympics. I was very inexperienced at the 4-5* level when I started with him, so the addition of Cristalline and Toulago to my group of horses was absolutely invaluable. I went through a lot of quick growth that year – but I’d say I’ve learned even more in the years since!

H&S: Could you tell us about the horses you are currently competing on?

AS: I am very fortunate to have the best group of horses I have ever had, so I am very much looking forward to 2020! Cristalline is my top horse, and she will be slowly rebuilding this winter. Benny’s Legacy is a new mount for me. I started riding him this past fall, and he has been an unbelievable addition to my string. Just A Gamble I have had for about a year, and it has taken me a while to figure her out, but I think we are finally headed in the right direction! Pembroke has been a part of my group of horses for a few years, and I’m hoping she will step up to jump some bigger Grand Prix classes at WEF (Winter Equestrian Festival). Toulago has been my go-to Grand Prix horse for years, but with the addition of Benny’s Legacy and Just A Gamble I am hoping he won’t have to do all the heavy lifting on his own! Lastly, I have a very promising 7-year-old stallion whom I will keep developing this year. 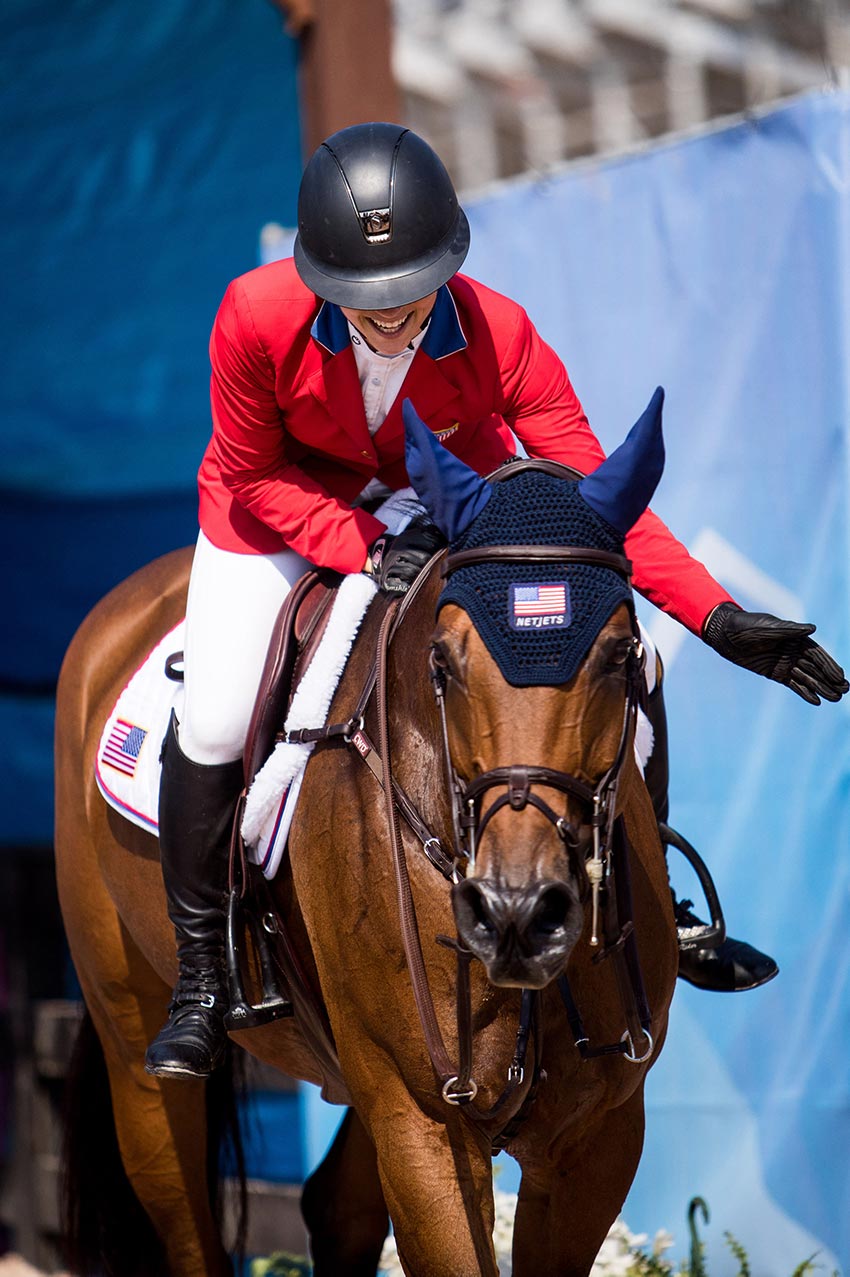 Sternlicht and Cristalline at the 2018 WEG, photo © Ashley Neuhof

H&S: What have been some of your most memorable achievements as a rider?

AS: By and large, my most memorable achievement was our team, and my individual, finish at the World Equestrian Games in 2018. The experience was so surreal to me – it is hard to articulate! More recently, this past fall, I won three Grand Prix classes in a row with two different horses. It felt like a huge achievement because it demonstrated a mental equilibrium that doesn’t come easily to me. I have been working very hard at honing those skills, so to be that consistent after a long year was incredibly rewarding.

H&S: What are your personal goals, both within and outside the equestrian world?

AS: This winter my goal is to win a 5* Grand Prix! I think at this point I am safely qualified for the [Longines FEI Jumping] World Cup™ Finals, so a top ten finish there is my ultimate goal for the coming months. In terms of my career with a longer-time view, I would love to jump another championship and win an individual medal!

Outside the equestrian world, two very unrelated goals are to run a full marathon and to get more involved in social justice work. This past fall I ran my first half marathon and it motivated me to want to run a full! I have always been passionate about criminal justice reform, and more recently I have become very interested in issues of food equity.

H&S: What is one piece of advice you feel is most valuable to share with young equestrians?

AS: I think it is incredibly important to align yourself with people you trust and to believe in the program that you are in. I have been very lucky to have many wonderful trainers who really fostered my love of riding and encouraged me to stick with the sport. There are a thousand ways to get from A to B when working with horses, so it’s important to take time to understand and learn the program you are in as best you can. My philosophy on working with horses is the amalgamation of bits and pieces of others’ programs that I’ve learned over the years (and it’s continually evolving!).

AS: I’ll be starting out the year at the Winter Equestrian Festival, aiming to get my horses going after a bit of a break; then I’ll be spending the latter half of the winter preparing for World Cup™ Finals. The Olympics is my dream, of course, so I am focused on bringing Cristalline back slowly so she is ready for what is hopefully a big year of jumping!