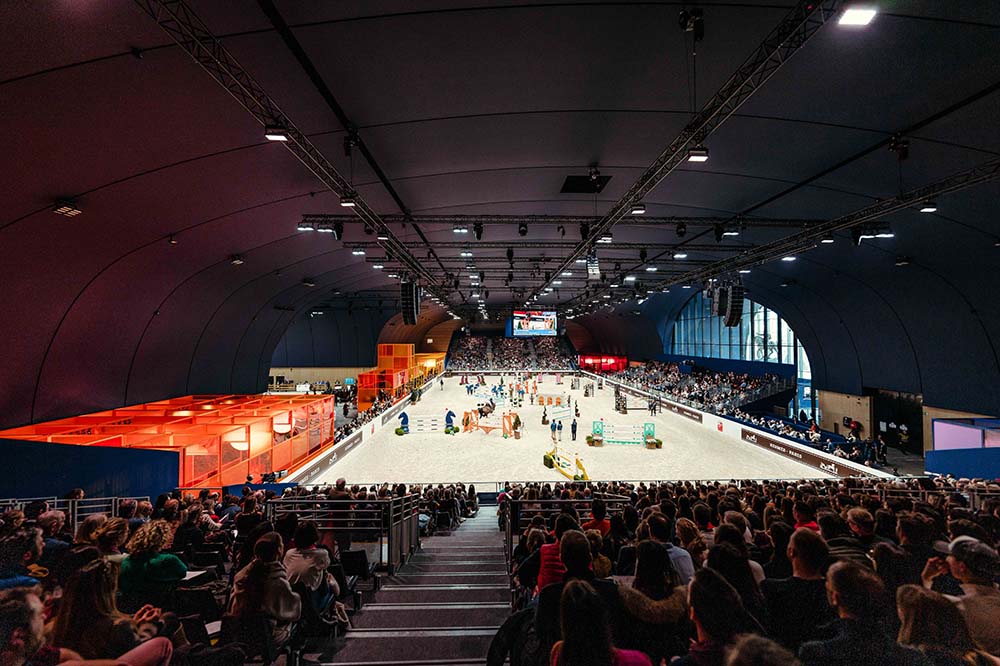 This past March, the 12th edition of the Saut Hermès took place in a new venue, the Grand Palais Éphémère. This temporary exhibition hall in the Champ de Mars was designed by architect Jean-Michel Wilmotte to host exhibitions while the usual home of the Saut Hermès, the Grand Palais, is being renovated for the 2024 Summer Olympics. This lovely venue overlooks the Eiffel Tower, and it was from there that spectators enjoyed Saut Hermès’ yearly celebration centered around the roots of Hermès: sport, emotion, and equestrian celebration. 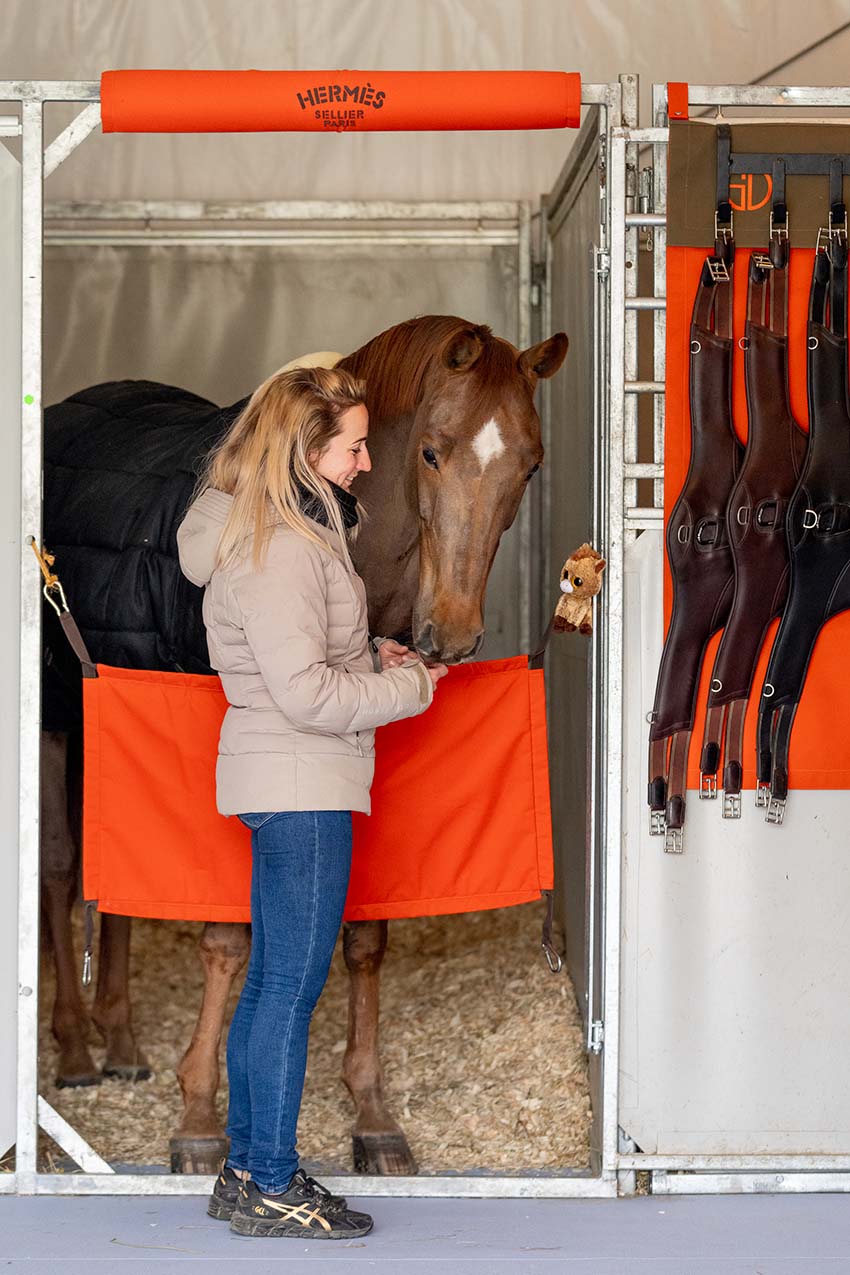 A private tour of the competitors’ stalls revealed a world of calm and happy horses standing deep in bedding, with their heads hanging over orange Hermès stall gates, and grooms peacefully but diligently moving about. This backstage world was a quiet sanctuary, a rarity in showground stabling, and a welcome respite for the horses, grooms, and riders weary from loud show days and a busy show schedule. At the Saut Hermès, it is apparent Hermès considers the horses as much their guests as they do the people.

The Emile Hermès Museum is Hermès’ private collection of equestrian antiques and original Hermès products that span several rooms of the third floor of the Hermès flagship store on Rue Faubourg Saint-Honoré, and as it’s invitation only, it is an incredible honor to visit this inspiring space. The curator of the space explains, “The collection is the spirit of Hermès and the soul of the company.” The moment the door swings open, the smell of old leather surrounds, and it is apparent one is in the midst of tangible history – the space is pure magic. 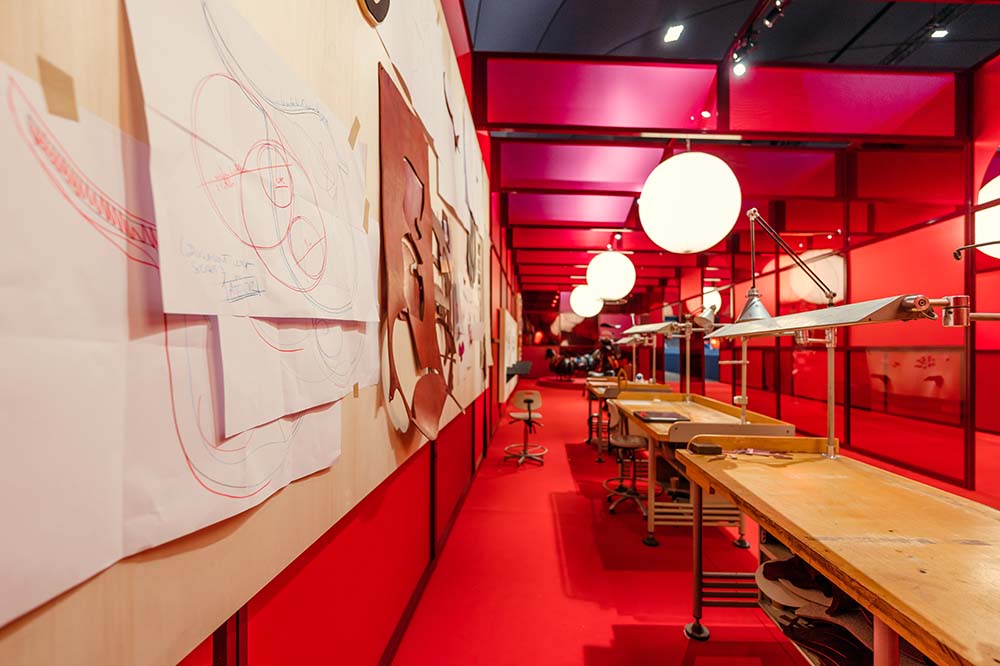 The Grand Palais Ephémère was not only transformed for showjumping, but to showcase the incredible level of detail and craftsmanship behind the Hermès brand. Down one of the many orange hallways was a sellier space, set up for visitors to take a peek at the process of designing the Selle Rouge, Hermès’s newest show jumping saddle. This special space was so modern, so clean, so Hermès, it was a tack room dream come true. 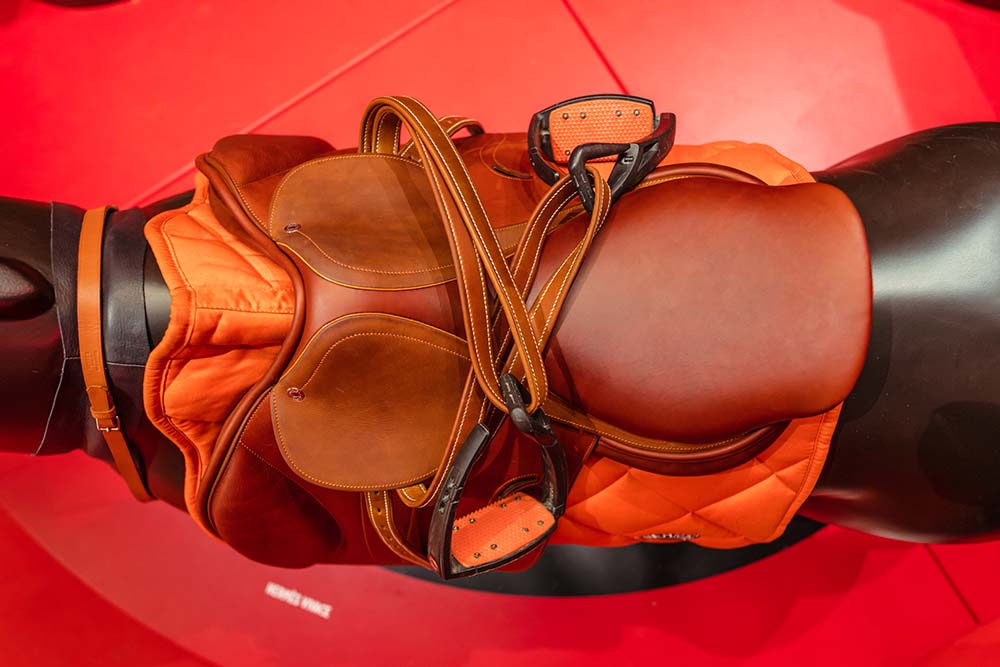 Since 1837, every Hermès saddle has been hand-made by a single craftsman, then specially configured for its rider and horse under the guidance of its saddle expert. The concept behind all Hermès tack is to feel the closeness and oneness with the horse. This process has to start with only the best of materials, and delicate intricate detailing and thought, throughout the process.

The Selle Rouge is the result of numerous discussions between rider, saddle expert, and artisan. The tree of the Selle Rouge is made of beech wood, making it lightweight and flexible. The leather shines a bright red, making it a saddle of transparent elegance as well. It is perfectly executed, perfectly Hermès. 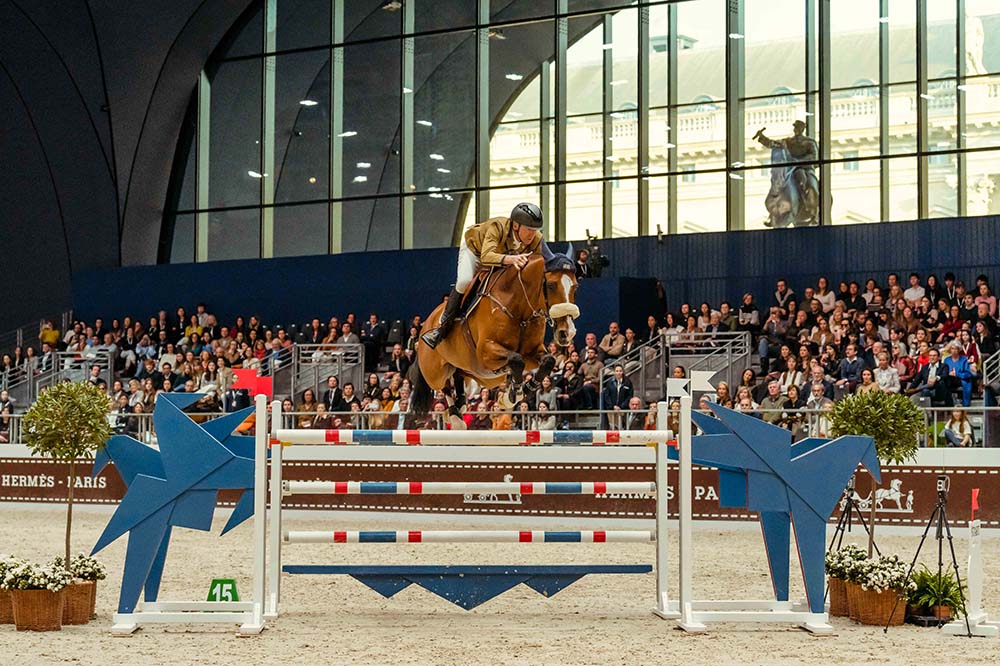 First and Foremost, A Horseshow

The 5* classes were sensational to watch, as difficult courses, navigated by exceptional horses and riders, made for quite a competition spectacle during the week. A few riders in particular had an excellent show: Marcus Ehning, Henrik von Eckermann, Edwina Tops-Alexander, Martin Fuchs, Peder Fredrickson, and Daniel Deusser, just to name a few. The winner of the Les Talents Hermès was Anna Carway. The Saut Hermès attracts the best riders, and it brings out the best of those riders. 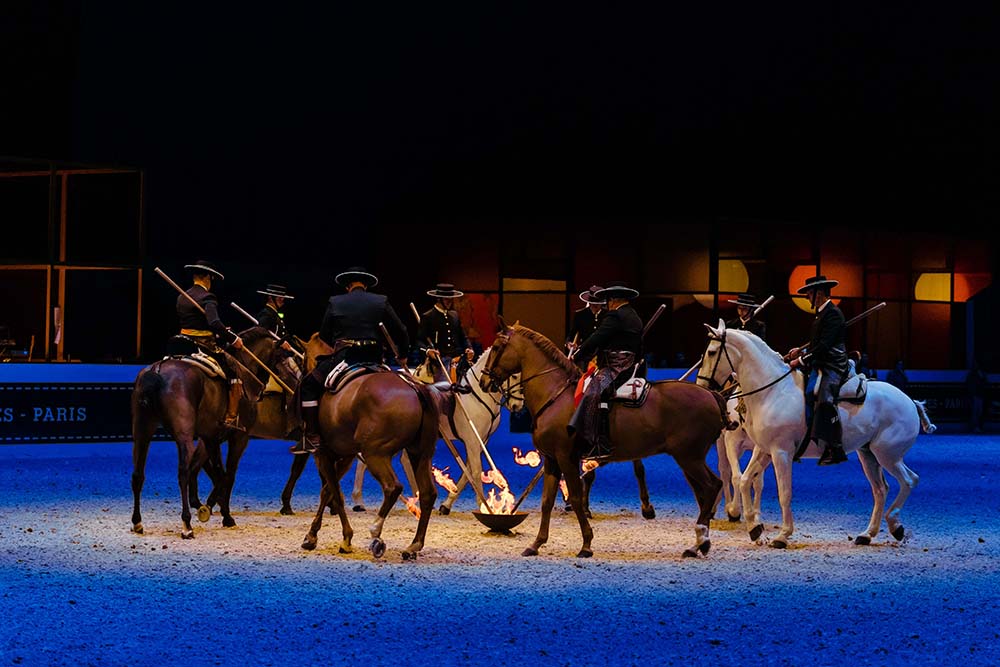 Gesture of the Soul 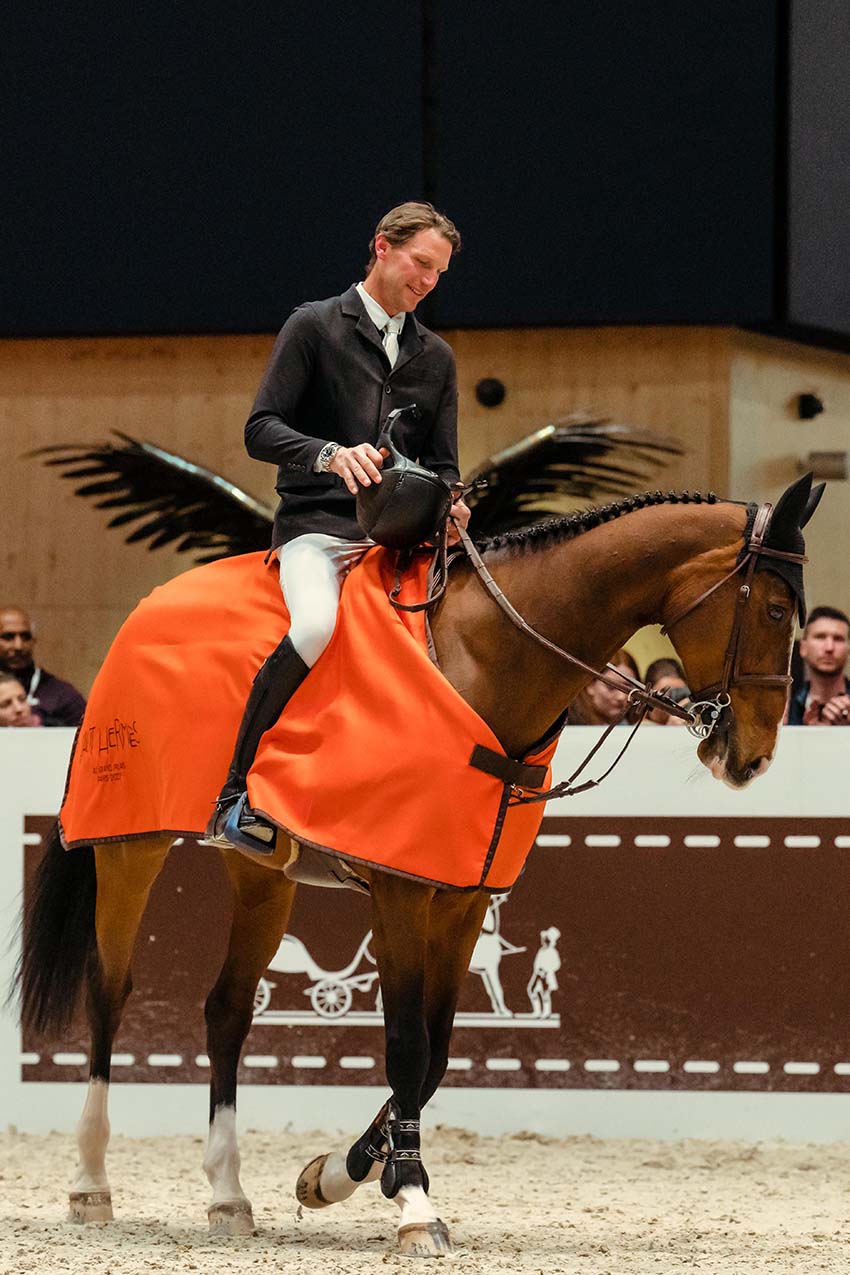 A Win for Kevin Staut

For Sunday’s Grand Prix finale, the jumps are set at an astonishing 1.60 meters, making the intimate indoor track incredibly technical and challenging. In the end, it was a good day for the French: Kevin Staut and his Mount Cheppetta took the title. The crowd erupted with a standing ovation as a sign of adoration for the pair, and Staut put on a big smile and Mount Cheppetta put on a good show during the victory gallop. 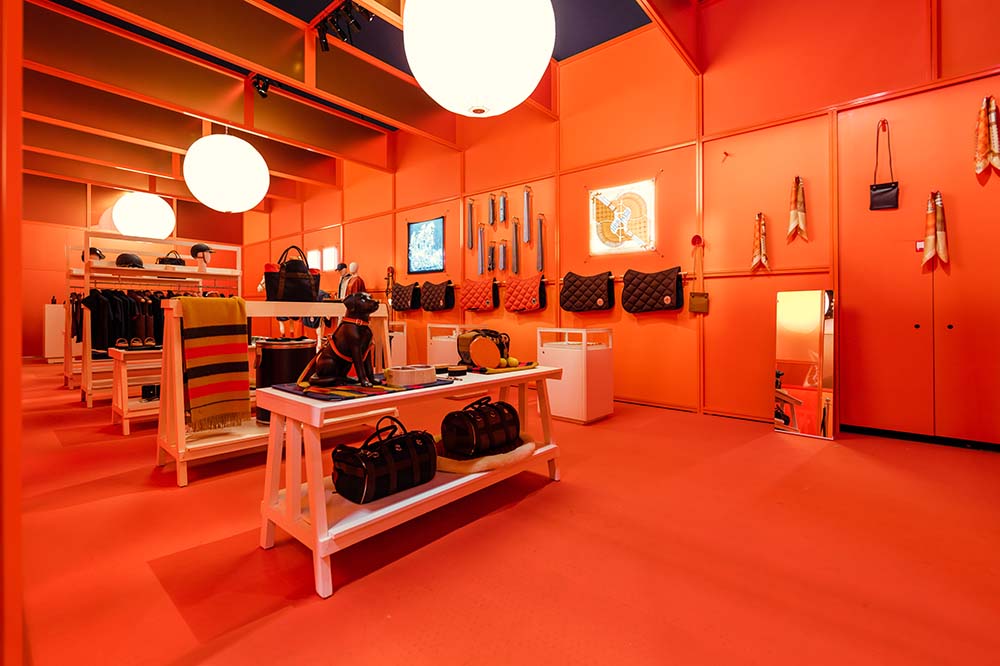 The Saut Hermès is not just a horse show, it is an immersive experience where each visitor is treated as a special guest of Hermès. It is a chance to celebrate the culture of Hermès, which is a culture of equestrians, craftsmanship, and history. The celebration of horse and rider leaves one feeling incredibly inspired. It is a show not to be missed, and 2023’s Saut Hermès is already on our list.

This cover story originally appeared in 2022 Vol. 2. The full issue can be read online here.