To Ride or Not to Ride: The Pregnant Equestrian

Like many horse show girls before me, I found out I was pregnant while (where else?) at a horse show. I had just finished competing in the Sunday Classic on an afternoon in April of 2012, and had had a funny suspicion that I might be pregnant. So, into the port-a-potty I went with my pregnancy test (true story) and lo and behold there were those two pink lines!  That was the last day I rode until one month after my daughter was born. However, many future mothers choose to continue riding well into their pregnancies.  Recently there have been two famous riders, eventer Zara Phillips and show jumper Georgina Bloomberg, spotted in riding clothes with their baby bumps.  London 2012 Team Silver medalist Phillips recently reported canceling all future events after receiving some heavy flack from photos of her doing a demo ride while four months pregnant on her horse High Kingdom during at the Festival of British Eventing at Gatcombe Park in early August. Of course, the fact that she’s also British royalty puts her under a microscope, but all the same, the photos ignited a debate over the safety of riding while pregnant. 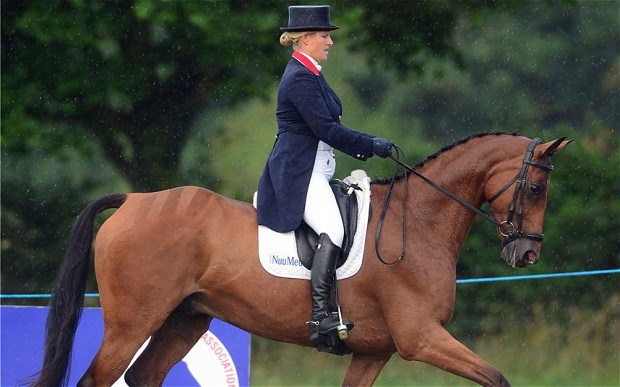 Zara Phillips sports a visible baby bump during on her horse High Kingdom at the Festival of British Eventing. Photo via www.telegraph.co.uk

Just yesterday, Georgina Bloomberg placed third in the $250,000 FTI Consulting World Cup Qualifier Grand Prix at The Hampton Classic Horse Show, no small feat for any rider in any condition, much less while pregnant. Bloomberg commented that her week competing at The Hampton Classic would be her last horse show before “maternity leave.” With a baby due in December, will this mother-to-be keep riding at home, or will she take a break while her baby billionaire-to-be grows? 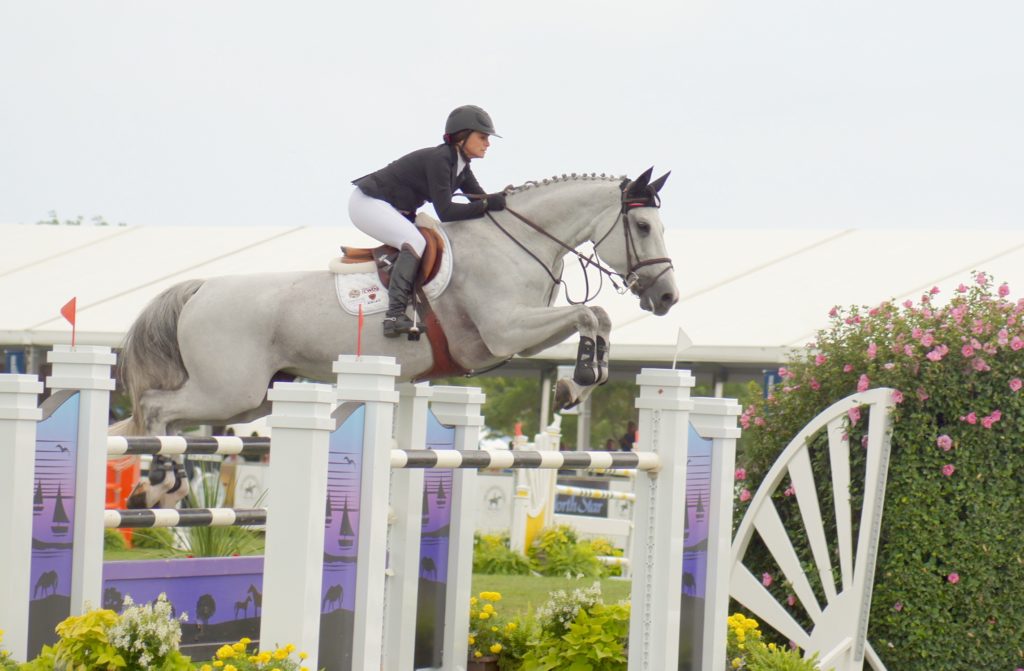 Georgina competed in fine form at The Hamptons over Labor Day Weekend. 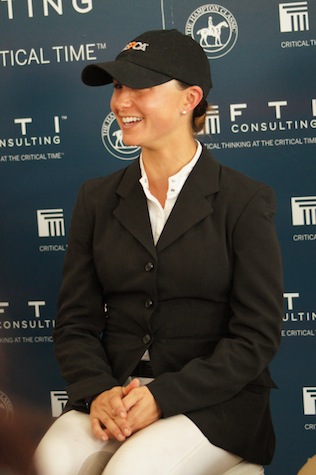 Georgina was showing signs of her baby bump over the weekend, with her hunt coat  just beginning to stretch around the middle.

No matter who you are, one of the first things you do when you find out you’re pregnant is buy a pregnancy book. High on the list of activities doctors recommend avoiding while pregnant is horseback riding (along with downhill skiing, ice hockey and cycling.) “In general I tell people if they’re excellent horseback riders and are just walking around on the horse, they can continue up to 12 weeks,” says OBGYN Kay Daniels. “But after 12 weeks, no riding. That’s because by this time, the fetus has moved up above the pelvic girdle, a bony structure protects the baby during the first trimester, and now all that sits between the baby and any external force is skin and muscle. If you get kicked or are thrown off the horse at this point, you’ve got nothing protecting the baby from trauma. Even experienced riders get thrown off; that’s part of the game. I just don’t think it’s worth the risk.”

For some women, riding isn’t just a hobby, it’s their job, and not riding affects their livelihood, while others are just too scared of the “what ifs.” The bottom line is that it becomes a personal choice. I reached out to California-based rider, and mother, Hope Glynn of Sonoma Valley Stables to ask her opinion. “I did ride through my pregnancy to five months,” she said. “My doctor said it was fine, and despite major morning sickness I felt fine on a horse. But when I had a horse catch a toe and fall down, it became very apparent to me that I was risking the health of two people at that point. I wouldn’t ride that long again if in the same position.”

H&S columnist Alexa Pessoa competed until she was 12 weeks pregnant and rode at home on the flat until she was 20 weeks: “I started to feel uncomfortable riding at that point so I stopped until about 5 weeks after my daughter was born,” she shared. “I think it’s different for each person.” For me, after having a miscarriage before becoming pregnant with my daughter, I was struck with an overwhelming feeling to be extra cautious. I knew what it feels like to lose a pregnancy, and that changed everything for me. While I do not at all judge those who continue to ride while pregnant, and I knew rationally that I would probably be fine, knowing that I would be nervous each time I got on my horse wasn’t worth the “what ifs.”