The Top Ten Things I Learned in Iceland

A single morning of riding in Iceland provided enough scenic views and exciting moments to fill not only a magazine article, but an entire book. How do you sum up the trip of a lifetime? While I try to figure that out, let’s start with a Top Ten list. Here is what I learned during 12 days of riding through Iceland.

10. From Bilbo to Tyrion
With its dramatic valleys, its desolate lava fields, rushing rivers and massive waterfalls… it’s no surprise that most of Iceland feels like a movie set. If ever there were an environment where hobbits might actually exist, it would be a silvery, moss-covered meadow in Iceland. And if Game of Thrones came to life, it would be within the craggy ravines carved into the earth ions ago by glaciers and lava flow. Actually, Game of Thrones really did come to life in the lava fields of Northeast Iceland – scenes from the television show were filmed there. 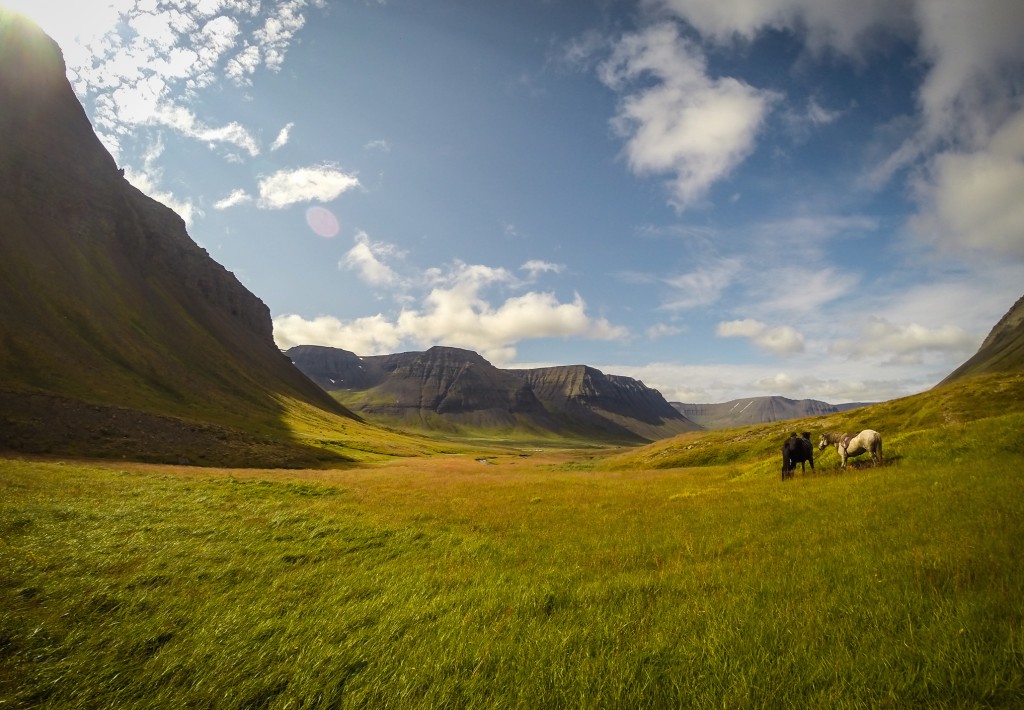 Looking down the Horse Valley near Pingeyri, Iceland

9. Layer Up
It’s mid-August, the majority of the world is baking and sweltering its way through the dog days of summer, and in Iceland, I’m putting on a third pair of socks and wrapping my face in a scarf to stay warm. Fifty degrees with a breezy cloud cover is a welcome sign of summer for the locals, even if does make the wimpy, thin-blooded tourists shiver while standing in the sunshine. Spending all day, every day outdoors and in the saddle for 12 days will teach one many valuable lessons about the weather. Here’s one: embrace the pea-green rain suit, and wear it with pride. 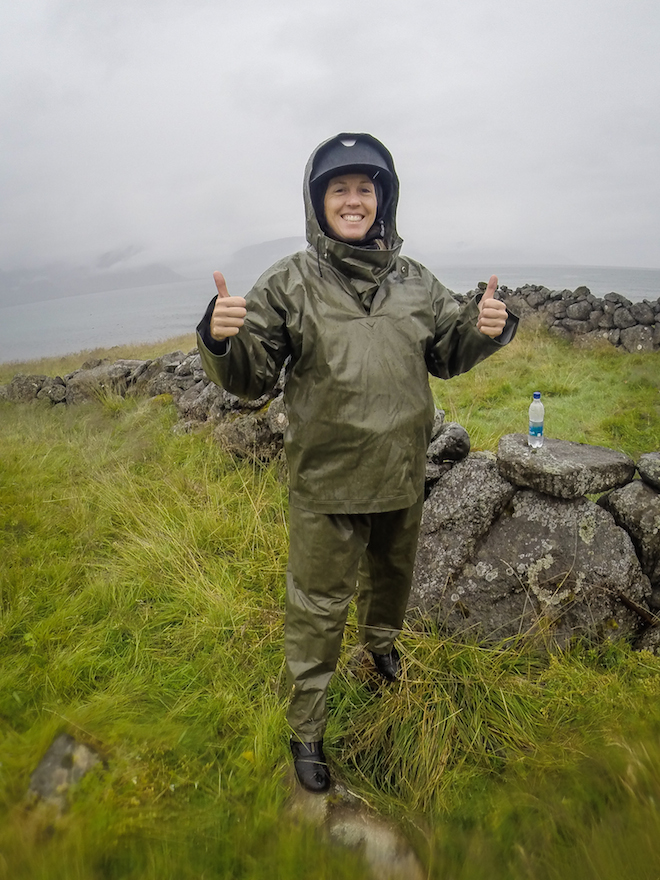 Take it from the H&S Editor: warm and dry in pea green was the OOTD here

8. Yes, Bugs Do Live Here
The bugs in Iceland appear to be making up for lost time; unable to thrive in the dead of winter, they appear in an Icelandic summer in thick hordes, seemingly as equal trade off for a day of blessed sunshine. More annoyance than anything else, swarms of these small flies made a beeline for our herd of horses in grassland areas on sunny days. Without a breeze, they gathered in buzzing clouds and would not be deterred by waving hands in front of ones face, walking in circles, or the use of flys pray (because there was none.) The human fly mask quickly became a priceless item. 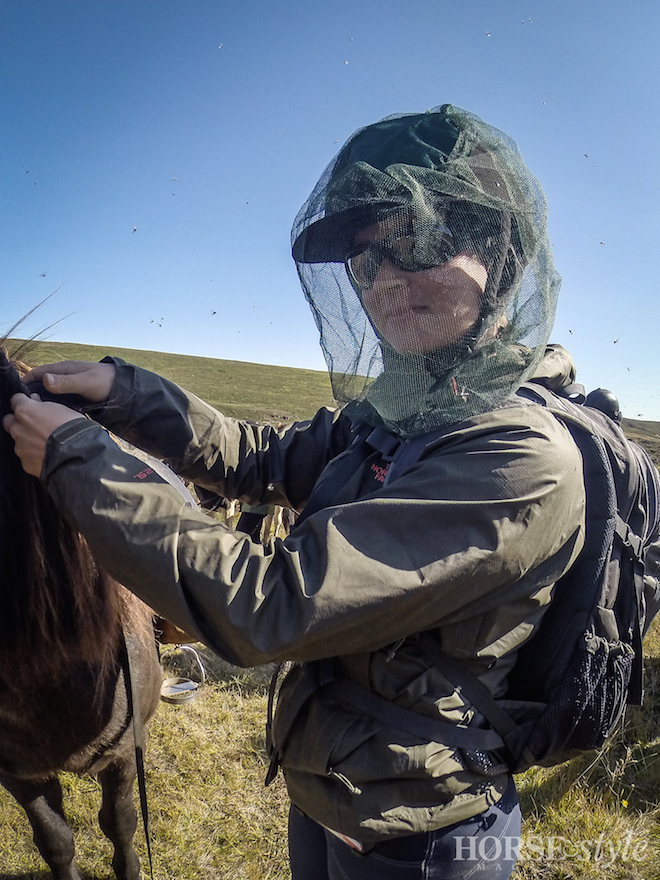 7. Ware Hole
It makes sense, of course. A country shaped by lava flows and literal rifts in the earth will feature more than its fair share of holes in the ground. When traveling on horseback, holes are significantly more perilous, but if there’s one horse you can trust to naturally “ware hole,” it’s an Icelandic. Their balance and natural sense of self preservation left us riders free to marvel at the sudden way the earth opens up to reveal a sharply lined crevasse of hardened lava, many of which are too deep to see down to the bottom. Cue the troll legends here, and ware hole, indeed. 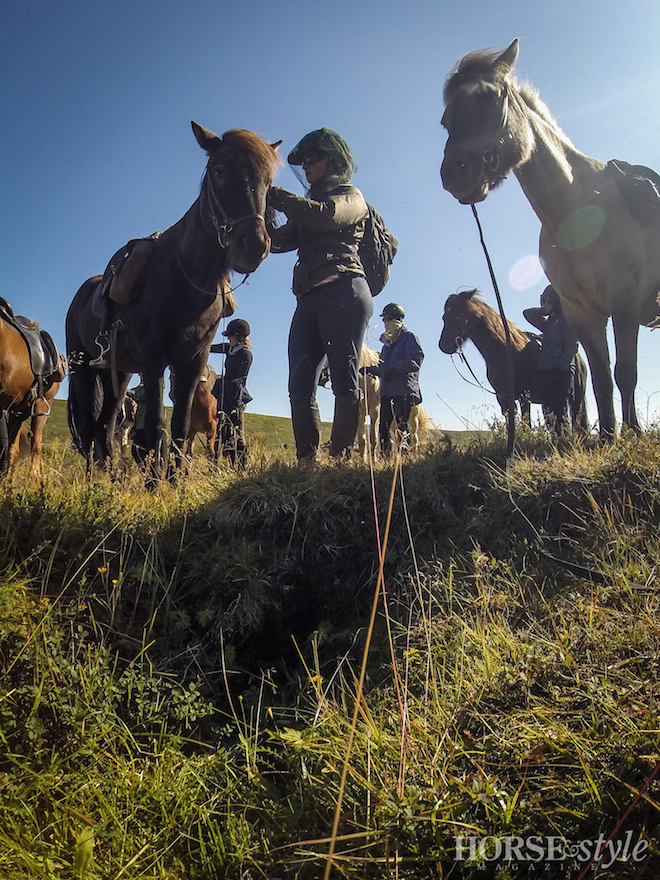 Attempting to capture the hole/cave in the ground directly beneath the rider. It was so deep that my entire leg disappeared inside it, and I could not find the bottom of it.

6. Where the Horses are Small and the Men are Tall
The tall gene definitely did not miss the people of Iceland, who are, after all, direct descendents of the Vikings. Many (many many many) tall, blond haired men populate this country of 300,000 citizens. When paired with 100,000 small Icelandic horses, the combination seems unnatural, at first. The tall Icelandic men who were our guides around Iceland were no shorter than 6’3” to a one, and rode horses that would measure as a medium pony back in the USA. But the locals don’t care about height measurements. In Iceland, tall men look good on small horses. 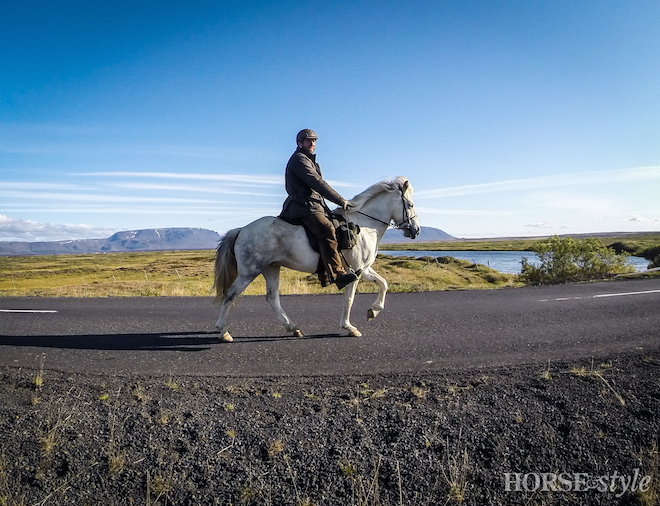 5. Group Love
There’s no better way to push oneself out of a comfort zone than to be mashed together with 20 strangers in a variety of close quarters. The second half of our tour was quite large, and in the group we found new friends in the French, comrades in the Canadian Americans, mostly silence from the Finnish, and plenty of entertainment from the Germans. Together, we experienced no less than half a dozen different sleeping situations in our point-to-point ride around Iceland. There was the hotel with shared bathroom (pure luxury), the one room mountain hut (and now we can say we’ve done that), the boarding house with bunk beds four to a room (by that point a bed and a roof was a blessing.) Character building, a built in bonus of this horseback trek. 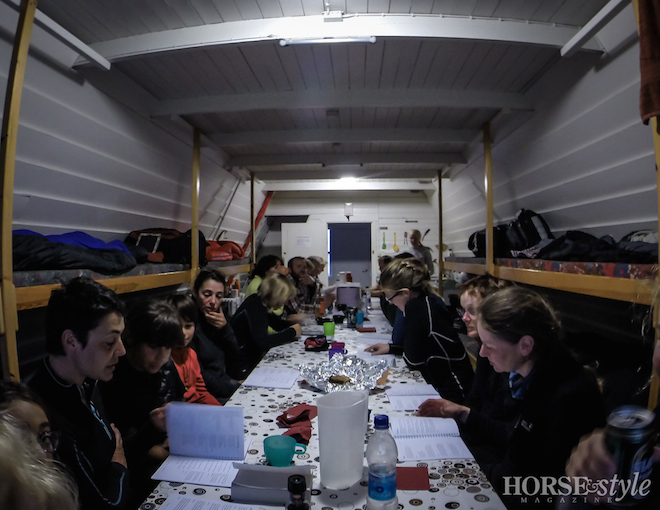 Inside the mountain hut, sparse, simple, and made for close quarters with two dozen of our newest friends.

4. How to Unplug
Speaking of character building. My phone or computer may or may not be regarded as a fifth limb for all the time they spend at my side. While I prefer the word “ambitious”, I may be regarded as a workaholic to some. So it was with much hesitation and anxiety that I bravely left my devices behind for three days of the trip. At least two nights of our remote lodging was wifi-less, but if one is going to unplug, the remote lava fields and geo-thermal hot springs of Iceland was not the worst place to do it. Taking in the incredible landscape, where you could turn a 360 degree circle without seeing any sign of human life was truly humbling. No computer needed. 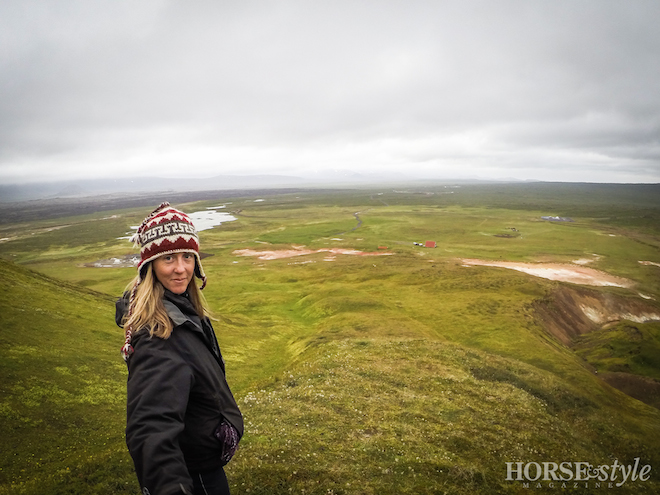 3. Geology 101
They do not call it the land of fire and ice for nothing. A constantly moving mass of lava and rock (see this week’s Bardarbunga volcano eruption scare,) the previously mentioned lava crevasses in the ground are just one feature of Iceland’s stunning landscape. The drama of a rockslide, a mountain cliff carved by the movement of glaciers, “young” lava fields (just 600 years old), Europe’s most powerful waterfall… it all added up one big, amazing crash course on the earth’s geology. And now I know: rocks in Iceland are never just plain rocks. 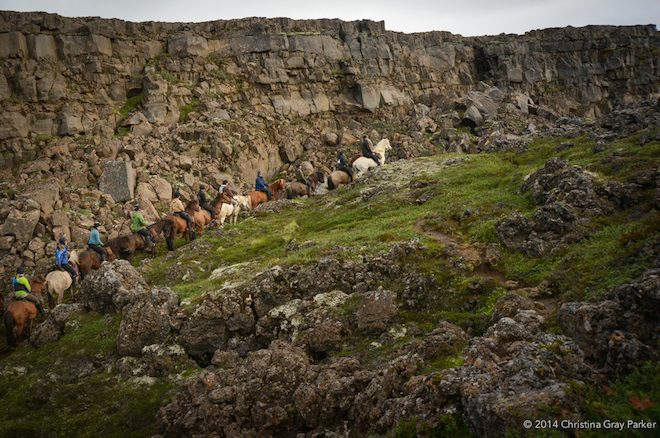 2. Mountain Goat Riding
Any other horse would surely break a leg or break down if asked to travel at speed over loose shale on a steep mountainside, over basketball-sized, wet and slippery rocks on a beach, or through boggy mud to his knees. The Icelandic’s ability to cover ground –all kinds of ground- and safely carry its rider through to the other side is astounding. Hence, I spent 12 days redefining my definition of “footing.” Good footing was packed dirt paths and single lane roads. Then there was the “footing” while tolting full speed down paved roads with a herd of 40 loose horses behind you. The footing while chasing a horse over moss-covered humps of lava that resembled ski mogols more than anything else. And the Icelandic horse never missed a step. 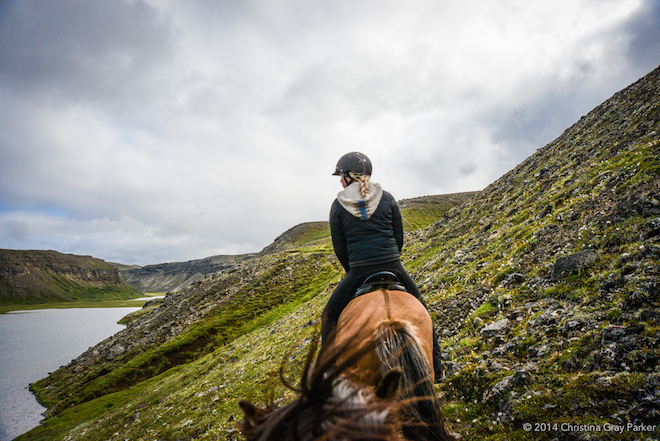 One of many steep, single track trails dotted with rocks and footing challenges

1. Ride an Icelandic
Let’s just state the obvious, the reason us riders go to Iceland is to ride Icelandic horses! When you’re traveling over the above footing, the wisest thing to do is to put the reins down and let your horse do his job. It’s comfortable, it’s fun, and it’s amazingly stress-free. Iceland is perhaps the only country in the world where there is just one breed of horse in the entire country. In that way the breed has been kept pure for hundreds, if not thousands of years. Here’s to many thousands more. For a stunning, life-changing experience, go ride an Icelandic horse in Iceland. 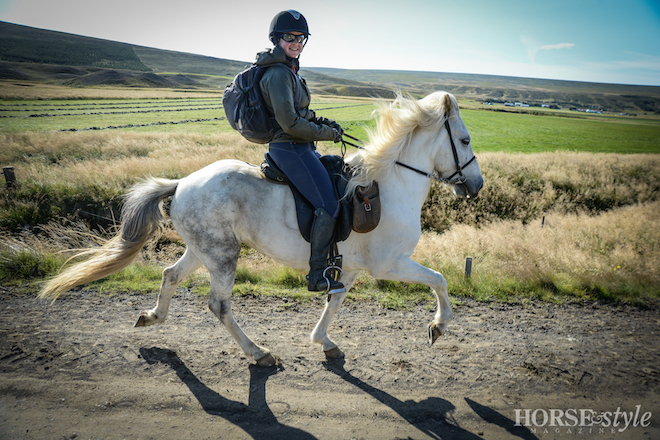 From August 11th – 24th, Horse & Style Editor Erin Gilmore and Horse & Style Web Developer Christina Gray Parker are trekking through the breathtaking country of Iceland with Riding Iceland. Follow their continuing updates, and don’t miss an overview of their trip in the upcoming Oct/Nov 2014 issue of Horse & Style Magazine.