Let’s make no bones about it – when the news that the Furusiyya FEI Nations Cup CSIO4*, traditionally held at the FTI Winter Equestrian Festival in Wellington, Florida, would move 245 miles north to HITS Post Time Farm in Ocala in 2015, it caused quite a stir.

Three FEI Furusiyya Nations Cup League competitions are held in North America each year; one in Canada, one in Mexico, and one in the USA. The top finishers in the North American League qualify for the annual Nations Cup Final, held the last two years in Barcelona, Spain.

The Nations Cup, which was redesigned two years ago with the sponsorship of Furusiyya, called FTI WEF’s winter circuit home for 14 years. But in 2015, a conflict with venue sponsorship (read Alexa Pessoa’s editorial in the current issue of H&S for more) initiated a change in location. Rolex sponsors FTI WEF, and rival watch brand Longines is the new title sponsor of the Nations Cup series. Longines prevented its title events from being held at venues with conflicting sponsorship, so the FEI Nations Cup held at WEF (yes, WEF will still hold a FEI Nations Cup class in 2015) would no longer count for league points.

When USEF put the FEI Furusiyya Nations Cup date up for bid, HITS Horse Shows stepped up immediately. For 33 years, HITS has run its own Florida show circuit (first in Gainesville, then in Ocala since the 90s, and at its current location since 2002), but HITS Ocala has long held status as the second, smaller East Coast winter circuit behind FTI WEF.

In 2015, HITS Ocala is aiming to change that as they step up to host an FEI-sanctioned event for the first time.

A New Face
Eric Sraus joined the HITS team on October 1st of this year as HITS Senior Vice President. An international FEI official, national judge and steward, Straus brings with him a long history of managing national and international competitions. Having officiated at the Pan American Games, Olympic Games, and assisted nations such as China and Africa with their first international shows, he’s well suited to manage the first-ever FEI competition held at HITS Ocala. 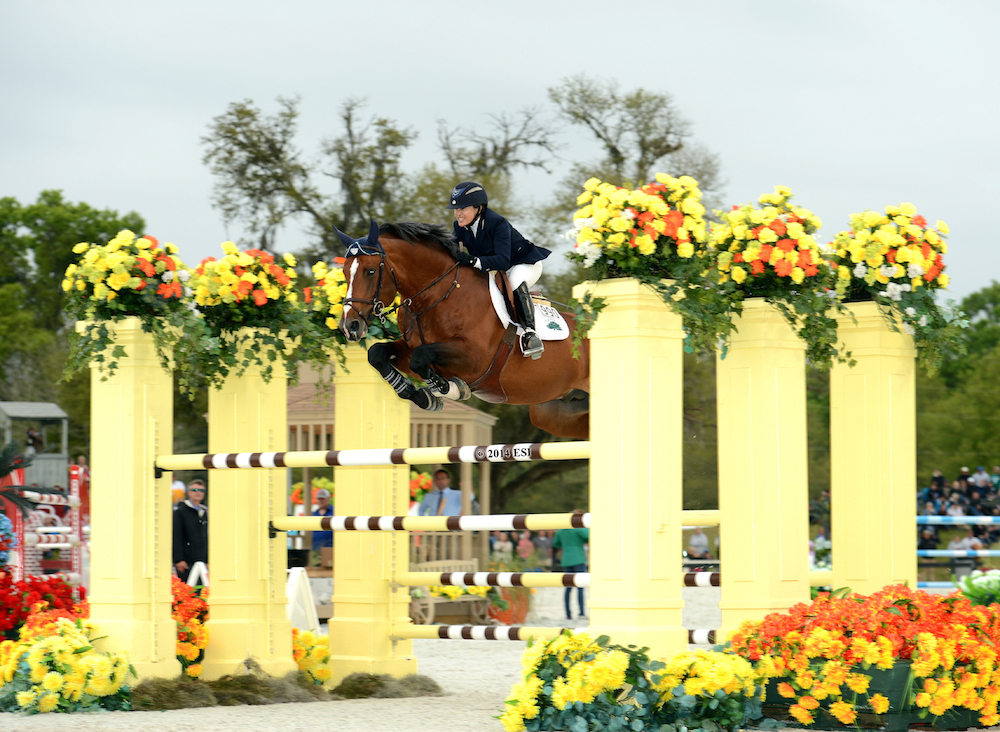 “It’s a big step up in some ways, but it’s also a very natural evolutionary one for HITS,” Straus says. “We’re doing a year’s worth of planning and work in less than 90 days, and we’re doing our very best to make sure that the field of play, the stables, and the spectator experience will be at its very best.”

WEF may be an established international venue, but in recent years it had struggled to keep spectators in their seats for the entirety of the Nations Cup, which was held as a night class and is longer than a normal grand prix, with over 50 riders competing over two full rounds and a possible jumpoff.

What Will Be Different?
HITS organizers hope to attract an enthusiastic crowd that will engage with the competition at a high level. The 2015 Furusiyya Nations Cup at Ocala will be held on Friday, February 13th at 1:00 in the afternoon, rather than as a night class. During the Nations Cup, organizers plan to halt all other competition on the grounds to make it easier for the exhibitors to attend. Just nine, as opposed to the traditional 12 teams of four riders will compete in round one, and six teams with three riders on each team will return for round two. This format tweak will tighten up the length of the class.

To further promote the event, Straus and the HITS team have been aggressively reaching beyond the horse crowd to the greater Ocala community. The mayor of Ocala, chamber of commerce and superintendent of schools have all shown support and are welcoming the event to Ocala. Continued promotion of the Nations Cup to the community at large will help fill the 10,000-seat stadium for the class. An extended VIP area will accommodate more spectators, and new FEI stabling will be located close to the grand prix stadium (pictured at top) to minimize walking distance for the riders.

HITS is bringing its entire culinary and hospitality team in from other locations; Nations Cup week falls on the HITS Desert Circuit off-week and will allos HITS Chef Napoli to be flown in from California.

“We’re literally in the process of pouring the concrete to extend our VIP area,” Straus adds. “It will run the length of the stadium so we can accommodate a greater number of patrons.”

The $4,000 week price tag for a VIP table during Nations Cup week will get you an enhanced VIP experience that includes a front row seat to five days of FEI competition. A Wednesday Welcome, Thursday Speed, Saturday Speed and Sunday Grand Prix will surround Friday’s Nations Cup with a solid week of international classes. A full schedule of the week’s classes is available here.

It’s full speed ahead and the countdown is definitely on, with just under 60 days to go until the gates open for Furusiyya FEI Nations Cup week at HITS Ocala. Team invitations are being sent out this month, and rider announcements are expected next month.

As show jumping grows in the United States, not only during the winter circuits but all year long, international competitions growing into new venues is indeed a natural next step.

Tickets for the $200,000 Furusiyya FEI Nations Cup CSIO4* go on sale in January. Will you be there?