The Six Horse Shows That Defined 2014

When you take into account the sheer volume of equestrian competitions held around the globe every single week of the year, coming up with just six to highlight is no easy task. If 2014 was anything, it was the year of new and ambitious events, each seeking to grab the limelight by offering a new standard of stature, venue, and overall competition.

This was just fantastic to observe and to participate in; after all, healthy competition is the number one characteristic of a thriving industry. But the horse shows chosen (in no particular order) by H&S in this busy, hectic year of competition each stood out in their own way to define the climate of show jumping in 2014. Whether they surmounted unusual challenges, helped us determine our newest world champion, or simply demonstrated how good this sport can be when all the pieces fall into place, the six horse shows that defined 2014 all share a single quality: they leave us excited for what 2015 has in store. 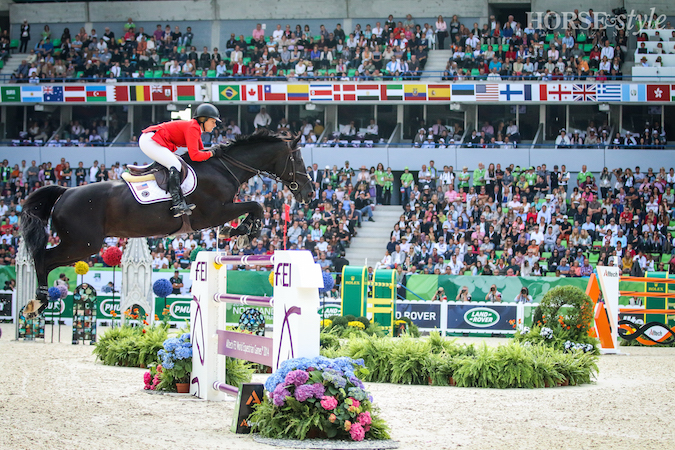 The 2014 Alltech FEI World Equestrian Games
Clearly, a competition that only comes around once every four years is a shoo-in for one of 2014’s standout horse shows. Make no mistake, while the 2014 Alltech World Equestrian Games in Normandy, France, incurred its fair share of criticism regarding organizational and logistical challenges, during show jumping, the events that went on inside the field of play were top notch.

Stade d’Ornano near the city center of Caen was an exciting venue for WEG, and when its seating capacity of 21,000 filled with French fans, the place reverberated with their roars of appreciation for the riders.

More countries than ever before (53) sent more riders than ever before (153) to contest the 2014 WEG. That long start list was winnowed down to the best four riders in the world, who then went head to head in the much-anticipated Rolex Top Four to determine the new world champion.

It was the culmination of a long week of competition that saw the top horses jump half a dozen rounds at the most difficult level of the sport. Where past years’ Top Four competitions had played to a certain level of drama, with quirky horses and surprise finalists, this year’s Top Four was a display of masterful riding by skilled veterans and classy horsemanship all the way around. It proved that these days, the best in the world are only the best by incremental margins, and the battle for the top is played out with handshakes and the best possible care of the horse in mind. As it should be. 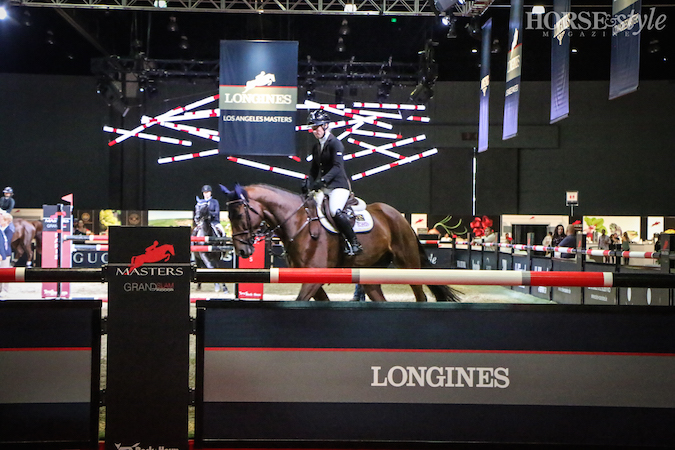 Warming up at the inaugural Longines Los Angeles Masters

EEM World, the organizing group behind the Masters trio of shows (Paris and Hong Kong are its other two glam locations), pulled off an impressive entry list that made more history, attracting many top international riders who had never set foot in the state of California before that week in September.

American show jumping fans were also treated to the red carpet atmosphere that the Masters are famous for (and one that no horse show in California had ever come close to matching). That and the posh, stage-lit warmup arena set in the middle of a vast hall created a spectacle that will not soon be forgotten in California.

The Masters are contracted to return to Los Angeles for the next three years, and EEM CEO Christophe Ammeuw has pledged to work out the growing pains that were associated with the debut event, such as stabling amenities and ring scheduling. American show jumping will be so lucky to see this event return to California in bigger and better form in 2015. 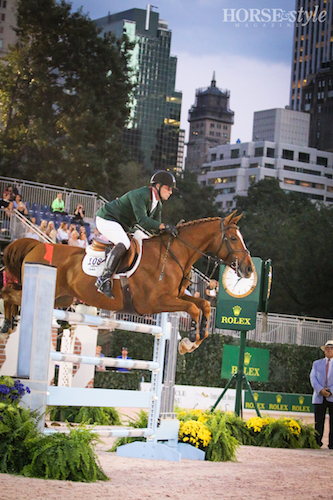 Skyscrapers loomed over the arena at the Central Park Horse Show

Central Park Horse Show
In continuing the theme of groundbreaking new equestrian events in 2014, one horse show took the cake. Making the impossible possible was the theme during the first-annual Central Park Horse Show, held September 18 – 22 in New York City. Held in a converted ice hockey rink mere steps away from 5th Avenue and Central Park South, Equestrian Sport Productions worked with Donald Trump himself to see the CPHS come to fruition. Multiple logistical, legal, political and land use challenges were successfully overcome to allow the show, in which show jumping was just one portion of the attraction, to be held for four beautiful autumn days in the heart of New York City.

The marquee event, the $210,000 FEI Central Park Grand Prix 3*, occupied a grey area in terms of format, which had to be molded to accommodate a live television broadcast. Ring size and nighttime lighting also proved to be of issue, but the fact that a 3* grand prix was held in Central Park and was broadcast on live television was such a milestone for American show jumping that the first-year hiccups were forgiven. And Georgina Bloomberg’s grand prix victory couldn’t have been better scripted. The sight of famous show jumping horses strolling under a stone overpass as carriage horses passed by on the road above them was an instant classic, and left this reporter looking forward to an even better edition returning to NYC in 2015. 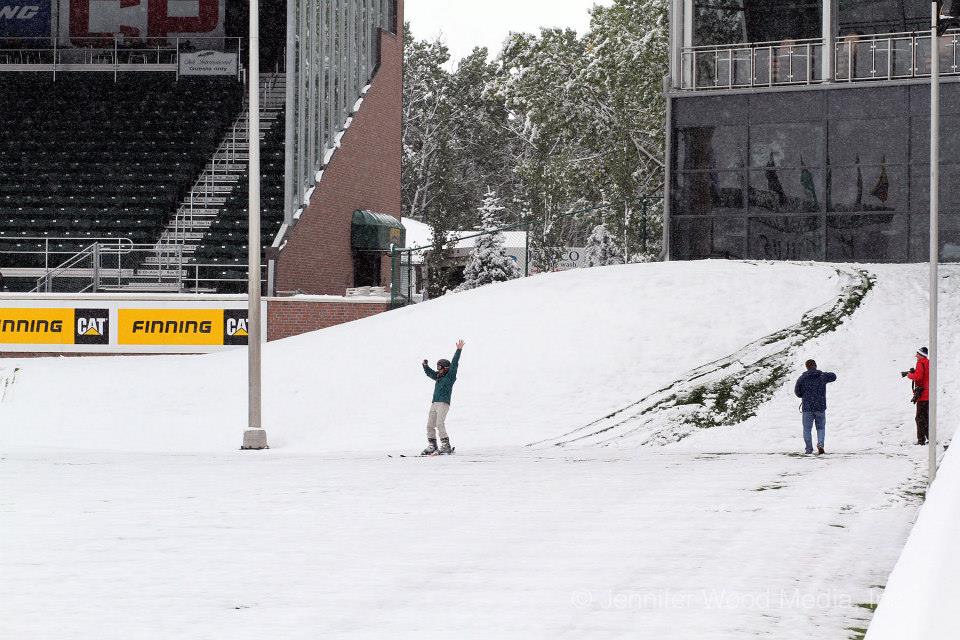 Not what warm up day at a horse show usually looks like. Photo ©Jennifer Wood Media

Spruce Meadows Masters
Any horse show that includes a blizzard, show workers skiing down the derby bank and snow banks pushed up against the side of the grand prix field next to brightly colored jumps has rightfully earned its place in the history books. So it went at the 2014 Spruce Meadows Masters CSI5* during a normally un-snowy week in early September. However, as anyone who has lived –or horse showed– in the notoriously unpredictable Calgary, Canada area at any time of year can tell you, one must come prepared for any type of weather. Freak snowstorms included.

While the Masters, which is the culmination of Spruce Meadows’ competition year and features the $1.5 Million CP International Grand Prix CSIO5*, did have to postpone its competition early in the week, by Thursday the snowstorms that blanketed Calgary had let up, allowing the Spruce Meadows team to work around the clock to unearth their grass fields from below several feet of snow and prepared for competition.

The 2014 Masters proved again why Spruce Meadows is known as one of the very best show jumping venues in the world, and why the small army who runs it are the best in the business. And when Canadian show jumping hero Ian Millar pulled off an amazing win in the CN International under brilliant blue skies on the final day of the Masters, Spruce Meadows literally sparkled and shone, snowbanks and all.

The arena at CHI Geneva

The CHI Geneva Horse Show
Ask anyone –rider or spectator– who’s capped their year at the annual CHI Geneva Horse Show in Switzerland in December and they will tell you that it’s a show that is not to be missed. It’s a given that it attracts the best riders in the world – the annual International Jumping Riders Club Top Ten Final is held there each year (won this year by World Number One Scott Brash, natch), determining who among the best in the world is the very, very best.

Apart from the stellar roster and quality of competition, this year’s edition of CHI Geneva will be sadly remembered as the venue where the wonderful AD Camille Z jumped her final jump. The beautiful, 11-year-old Zangersheide mare owned and ridden by Athina Onassis de Miranda of Greece suffered an irreparable leg fracture after falling during the Credit Suisse Grand Prix on December 11th. Tragedy certainly doesn’t discriminate when it comes to horses, and AD Camille Z’s untimely passing was a sad reminder that special partnerships with great horses can be fleeting. Athina shared a special bond with Camille, and unquestionably treasured the time she was able to spend with the great mare. 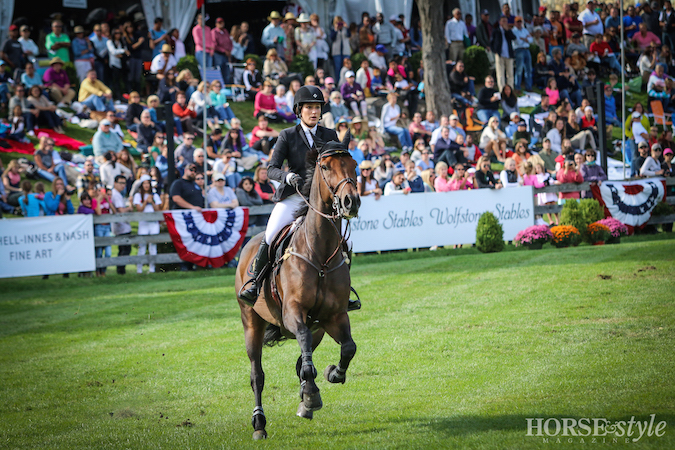 The American Gold Cup CSI4*-W
Maybe it was because I was wearing the rose-colored glasses of a traveler recently back home in the USA, but the red, white and blue of the American Gold Cup stood out in high relief during this year’s edition at Old Salem Farm in North Salem, New York. OSF organizers, horse show organizers, and the shepherds of this class that is a classic in the annuals of American show jumping all work together to put on an event that is hard to beat. Grand Prix Sunday was glorious and attracted a big crowd that lounged on the grass bank next to the main ring, filled every other available vantage point, and stuck around for the victory gallop and autograph signing like proper sports fans.

Also symbolic this year was Jessica Springsteen’s exciting victory in the historic American Gold Cup Grand Prix aboard Vindicat W with her famous parents watching on. Springsteen’s win, which was just one in a banner year of victories for the 22-year-old rider, signaled her generation’s definitive presence at the grand prix level – that is, her generation of well heeled, uber-talented riders with the lineage and/or financial backing to make it in show jumping these days. Springsteen is one of the more talented riders among the early-20s set of serious riders, and if 2014 was her entrée year, her competition will be well-advised to watch their backs in 2015.