Featured in our ‘Formidable Chestnuts’ article in the June/July issue, Rothchild and McLain Ward will represent the United States on the team for the Pan American Games in Toronto in July and recently won the $210,000 CP Grand Prix at Spruce Meadows Click here to see the full article.

Rothchild entered Ward’s string in 2007 as a six coming seven year old. For Ward, the story of Rothchild is one of many fond memories of his father Barney.

“I didn’t want to buy him. I actually refused to buy him. My father bought him while I was on the airplane.” Five years after the horse came to the barn, Barney lost his fight with cancer. The fierce chestnut has without a doubt proven worthy of purchase as well as the title of ‘formidable’.

Upon watching his ears-pinned expression while competing, you would think the horse was an angry, resistant schoolmaster, not an international superstar.

“His character is what makes him formidable,” explained Ward. “He’s a fighter and he tries—he gives you all he has to give you. He’s a very competitive horse.”

Posting several impressive wins, including LGCT’s 2014 Grand Prix of Antwerp, 2014 World Team Bronze Medal and two very close seconds in the 2015 HITS Million Grand Prix events in Thermal and Ocala, one of the most bittersweet Rothchild stories comes from the 2014 Alltech FEI World Equestrian Games in Caen. After some incredible performances, including going first on Day Two and giving the world a lesson on how to ride a difficult course clean, notably only twelve other competitors out of over a hundred matched that feat, the pair continued to go fault free moving up from 14th to 5th on the leaderboard. Fifth is by all accounts a superb finish in a World Games. However, all of us who followed this feat, secretly wanted to see the best riders in the world attempt to ride this fierce warrior in the Final Four. 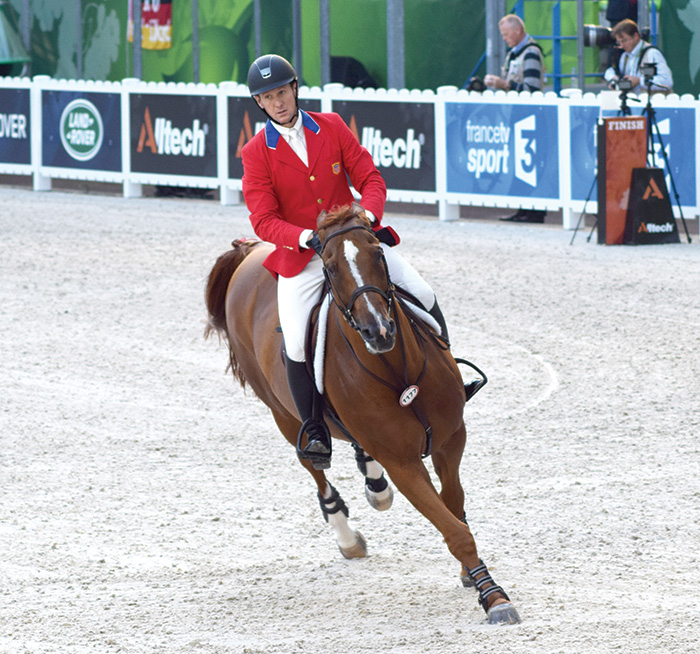 Rothchild and McLain at the 2014 WEG

As with any top athlete, their training program is uniquely their own and in this sport knowing what suits your horse is essential.

“His warm-up is peculiar, you have to know him. Your warm-up can go in the wrong direction very fast,” Ward warned. “He’s a bit temperamental and very sensitive. You can’t push him; it’s more like coaxing him. So I ride for about 15-20 minutes in the warm-up, enough to get him loose. He knows his job.”

Although he can be a handful in the warm-up ring, in the ring he’s not difficult. However he does have a style all of his own. “I think when you watch his style of jumping and his physique you’d be hard-pressed to say he’s the ideal show jumper. But two assets have helped him overcome his less than ideal style, he’s very careful and extremely brave.”

Calm, cool and collected doesn’t describe Bongo, however Ward said ‘chestnut on fire’ would be an appropriate description. Just over 16h with a warrior mentality, Ward agreed that Bongo has a huge heart.

This article was originally published in the June/July 2015 issue of Horse & Style Magazine. Go here to read the entire issue online, or subscribe.