Deusser continues on his hot streak

The first class of the Longines Global Champion Tour was a Table 3 warm-up class with €25,000 at stake. Many riders who did not compete in the Global Champions League finale on Thursday night opted to ride the seven jump first round as a warm up and accrued a few time faults giving their horses a tour of the cavernous outdoor arena at the Al Shaqib Equestrian Center. There were a number of riders that chose to compete and Daniel Deusser, who went eleventh in the class of 45 horses, on Happiness Van’t Paradijs (Obourg x Quick Lauro Z) was ultimately the quickest over the five obstacle continuous jump off course. Deusser has been on a bit of a roll with five star wins at the Longines Masters of Los Angeles and Equita Lyon over the past few weeks.

The Brits also came out to show they were contenders, Laura Renwick laid down a quick clear midway through that wound up second and Jessica Mendoza wrapped up the class with a quick time that was good enough for fifth. The Whitaker brothers took sixth and seventh respectively. Peter Fredricson, fresh off of his individual Olympic silver medal rode to third place on his very speedy H&M Zaloubet (Maloubet de Pleville x Robin Z) with a beautiful clear round. Top league contenders Rolf-Göran Bengtsson and Edwina Alexander both jumped clear first rounds with a time fault carefully preparing their top horses for the League Finale tomorrow! 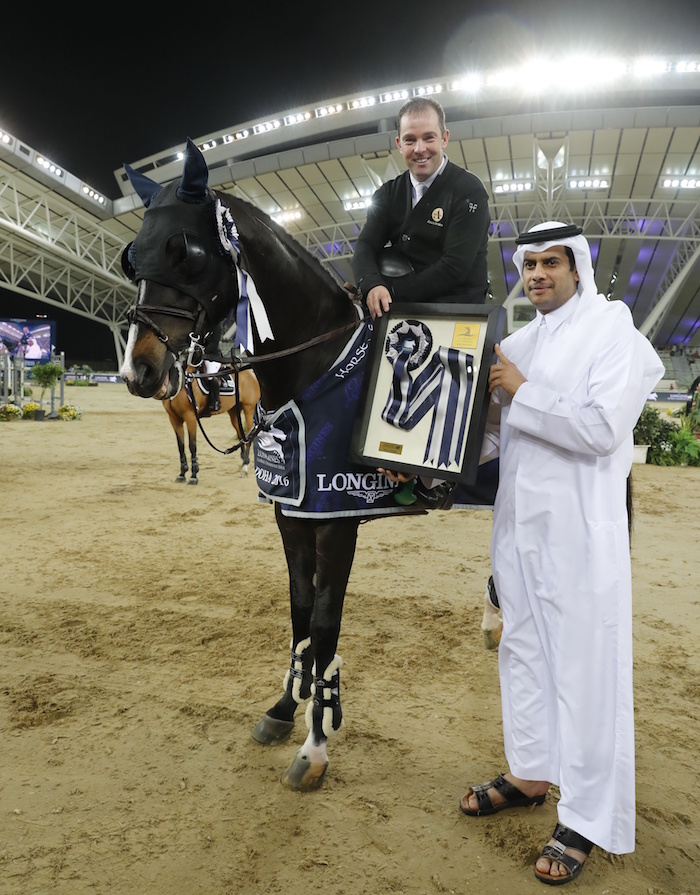 Cian O’Connor shows that he came to compete

O’Connor, who welcomed a new baby girl on Wednesday night, galloped to an unbeatable clear in the 1.45 Speed Class on Friday evening to celebrate her birth with the top share of €25,000 on the speedy Callisto (Quasimodo Z x Jokinal de Bornival). Hometown hero Sheik Ali Al Thani went early on and laid down the first quick clear round of the night, he ultimately wound up fifth but got the crowd excited and showed everyone there were a few strides that could be left out in the last line, a double combination with a long gallop to the final oxer. Countryman Bassem Mohammed went at the end of the class and almost caught O’Connor on Argelith Squid (Salito x Gibralter), a game grey gelding with a heart of gold, he was just over a tenth of a second off the time. 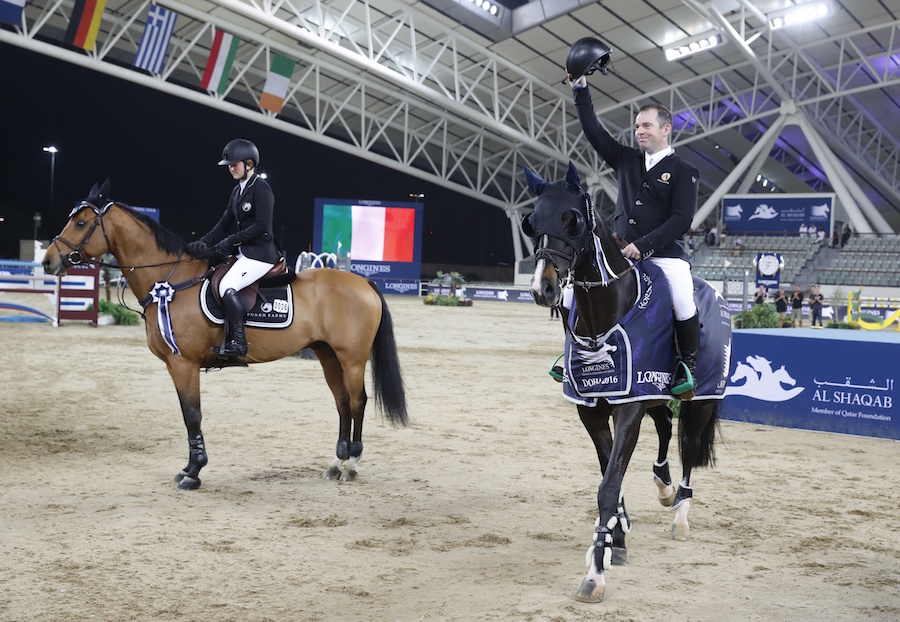 Up and coming American rider Emily Moffat, who just recently began jumping at the five star level rode Poden Farms Cassius Clay (Carolous x Burgraff) to third place with a very quick round from a speedy but unconventional little horse that she rode beautifully. Moffat’s trainer, three time Olympian Ben Maher, was on hand to coach her to this top placing, fantastic for a newcomer at a show with most of the top riders in the world in attendance. Christian Ahlmann and Michael Whitaker rounded out the top six with smooth clear rounds in preparation for Saturday.

Riders jump for big money and bragging rights on Saturday, there is a 1.50/1.55m class with €270,000 at stake, and the Longines Global Champions Tour Grand Prix with a purse of €450,000, not to mention the bonus money for the winner of the League. The Grand Prix will begin at 5 pm local time and Rolf-Göran Bengtsson and Casall got the lucky last draw in the class. We look forward to bringing you videos and results tomorrow from these exciting classes in Doha!