You would be hard pressed to find a rider who doesn’t love, or who has not daydreamed about, riding on the beach. With the sun shining down, and the waves crashing against the shore, it seems the perfect way to spend a day. Now, on top of the beach scenery, add some beautiful fences, a cheering crowd, and some of the world’s top riders, and you have the Miami Beach leg of the Longines Global Champions Tour.

As we saw last week in Mexico City, the LGCT does not skimp on nail-biting tension, and Miami Beach proved to be no different. Thursday’s opening class, the Miami Beach 2017 CSI5* 1.45m, turned into a heart stopper with Harrie Smolders and Zinius winning with an amazingly fast time of 25.64s. Only Nicola Philippaerts and Ustina Sitte even came close to beating Smolders time. However, they were not fast enough, the Belgian pair finished in second place with a time of 25.73s.

The second 5* class of the day was the Miami Beach 2017 CSI5* 1.50/1.55m, which doubled as the first round of the GCL competition. Positioned as the last pair in the jump off, Jane Richard Philips of Switzerland rode her horse, Dieudonne de Guldenboom, to the fastest clear round. She beat Ireland’s Bertram Allen and Hector van d’Abdijhoeve by two seconds, finishing in 40.83s. Allen’s Valkenswaard United teammate, Alberto Zorzi and his mount Cornetto K, rounded off the podium. While they may not have won the individual part of the class, their second and third place finishes allowed Allen and Zorzi to secure the lead for Valkenswaard United going into Saturday’s second round of competition. 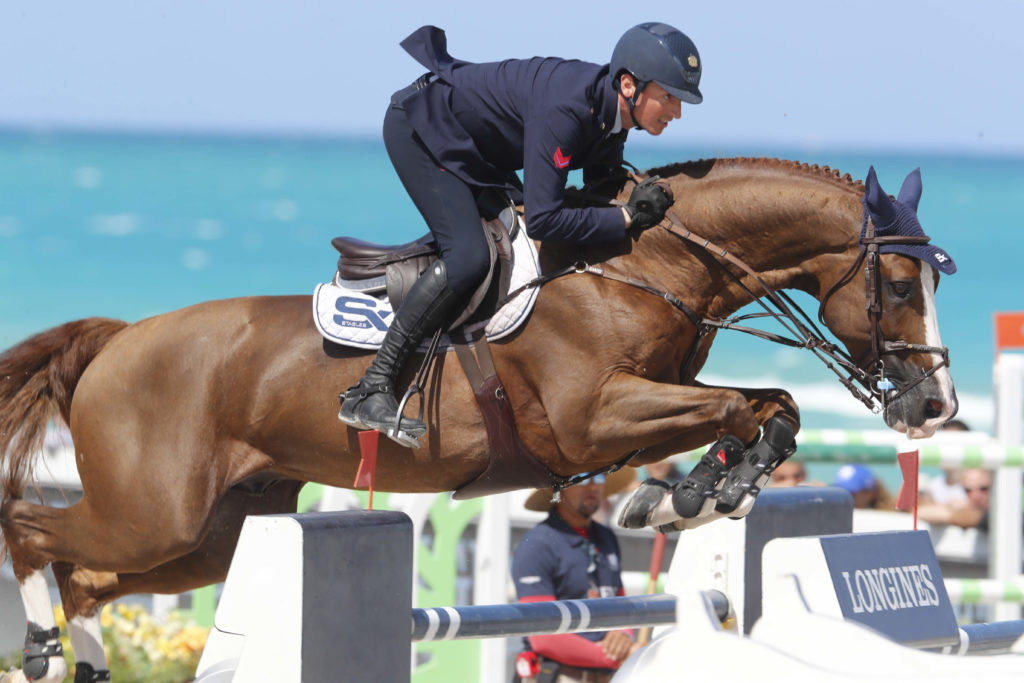 Friday’s big class was the Miami Beach 2017 CSI5* 1.45/1.50m. In a repeat of last week’s performance, Lorenzo de Luca and his stallion Halifax van het Kluizebos blazed to victory in 32.64s. Christian Ahlman and Caribis Z were second in 33.83s with Jessica Springsteen and Davendy S third in 34.13s. With a Friday victory in both Mexico City and Miami Beach for de Luca and Halifax, all eyes are watching to see if they can make it a hat trick next week in Shanghai. 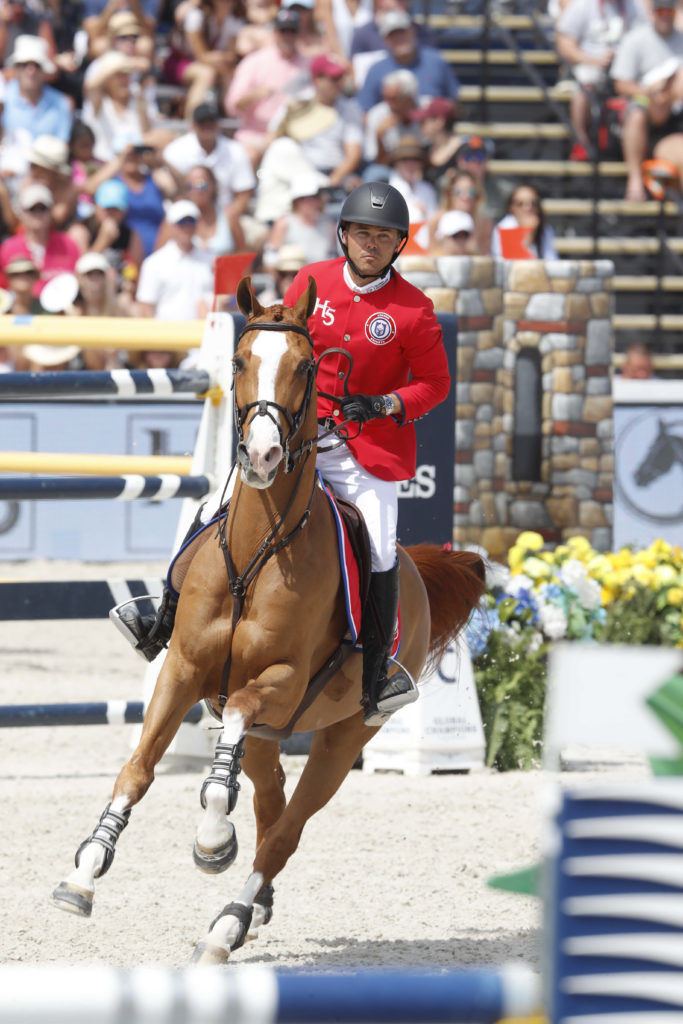 Saturday proved to be an exhilarating competition for the beach spectators. The first of two Miami Beach CSI5* classes was the 1.55/1.60m, which also served as the second phase of the GCL competition. With Bertram Allen and Hector van d’Abdijhoeve unexpectedly having 8 faults, it was anyone’s guess which team might pick up the League win for the week. In a flash of red on red, Kent Farrington and Creedance of the London Knights streaked across the sand, producing a clear ride in 64.65s. Teammates Ben Maher and Don Vito had gone earlier, coming away with only 4 faults and a time of 70.78s. Combining Maher’s 4 faults with Farrington’s 4 faults from round 1, they were tied for faults with Valkenswaard United, the champions from last week in Mexico City. However, in this sport there is one way to settle a tie, and that’s with the tick of the clock. Farrington’s blazing fast ride combined with Maher’s time allowed the London Knights to finish with a combined time of 135.43s, 8s faster than Valkenswaard United, who ended up second for the week. The St. Tropez Pirates finished in third, one spot down from last week. 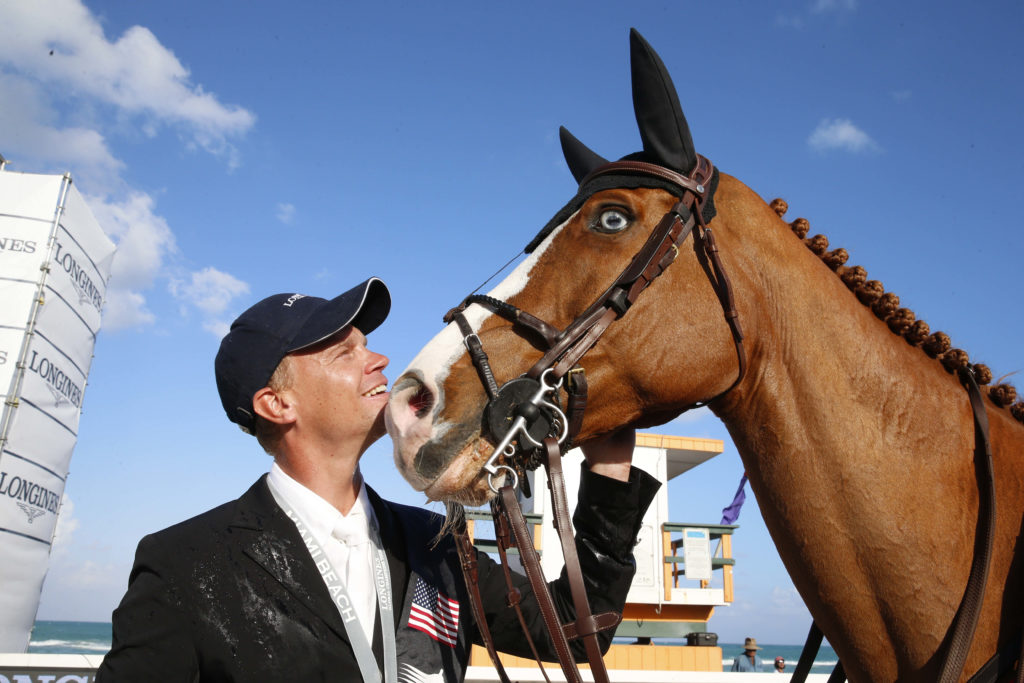 Saturday finished the with LGCT Grand Prix. The CSI5* 1.60m course was designed to be the highlight of the week and it did not disappoint. Jerome Guery of Belgium and Grand Cru van de Rozenberg won the day by half of a second. For the second time this week, the best spot in the jump off proved to be last. They beat Alberto Zorzi and Cornetto K’s time of 37.96s with their own swift time of 37.39s, giving the Miami crowds something to cheer about.

The tour will continue on April 28th, bringing the world’s top riders to Shanghai. We are patiently waiting to see if our favorite riders will rise to new challenges and what GCL team shake ups there will be. See you in Shanghai!